“I am sceptical of patents, that's why I didn’t protect graphene”

Back in 2004, Andre Geim and his colleague Konstantin Novoselov isolated graphene. This kicked off the development of a new material that, despite not having unveiled all its potential yet, earned them the Nobel prize in Physics in 2010. 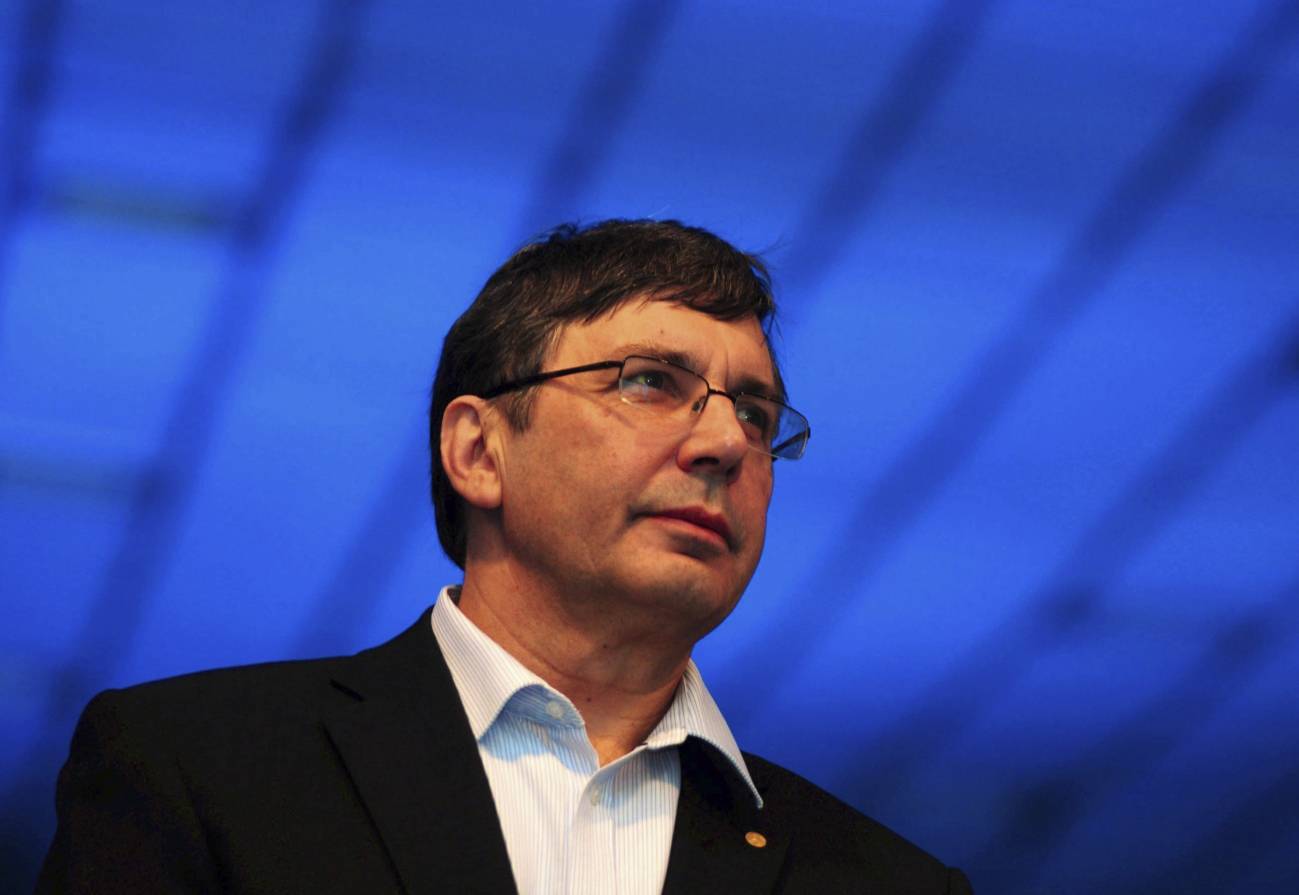 Fifteen years ago, Russian researcher Andre Geim and his colleague Konstantin Novoselov isolated graphene. Extracting a single monolayer of carbon atoms from graphite may have seemed a simple curiosity back then, but many exciting applications were to come. Before long, this new material’s outstanding properties amazed scientists, who found a huge potential in graphene. For that reason, both Geim and Novoselov received the 2010 Nobel Prize in Physics.

It was not the first big prize awarded to Geim. He had received an Ig Nobel prize in 2000, a parody of the prestigious Swedish prize given out every autumn to the most unusual scientific achievements. Geim was awarded this honour for using the magnetic properties of water to make a frog levitate. To date, he is he first an only person to win both awards.

Now Geim works at the University of Manchester. SINC spoke to him during a visit to Spain organised by the Graphene Flagship, a long-term European project that brings together more than 150 partners and counts on a 1-billion-euro budget to bring graphene from the laboratory to the market.

Graphene was known already, but people weren’t paying to much attention to it. Why did you start working on this field?

People knew that graphite was made up of several ‘graphene layers’, but their properties and behaviour were unknown. Graphene had never been isolated, nor investigated. It was not understood at all. Indeed, this is something quite common in science: we knew the planets existed for almost three thousand years, but we had to wait until Copernicus’ time to fully understand them. Furthermore, most people believed that graphene would not even exist if isolated.

Did you expect this huge outcome?

That is not our goal as scientists. We were trying to figure out what happened to graphite if we kept making it thinner. We didn’t expect to get it down to a single layer, and the most important thing wasn’t that it is just 1 nanometre thick, but the fact that it showed unique properties that nobody could expect. Had it just been a single carbon atom layer, people would have said ‘oh that is cute,’ end of story. Isolating graphene kicked off the discovery of a myriad of electronic and mechanical properties that attracted the attention of the community.

In your opinion, which of its many properties is most interesting?

We got the Nobel prize for its electronic properties. I believe that the most interesting thing is that day to day physical laws, used to describe copper or iron, don’t apply to graphene. You enter the world of quantum relativistic physics. Suddenly, we can sit at a table and study phenomena that should only occur at light speed, or in CERN experiments. Nobody thought that would be possible.

Also, looking from a wider angle, we had the Stone Age, Bronze, Iron, now silicon and plastics. All these materials are three-dimensional. There were no 2D materials, where thickness just does not exist. We expanded our toolbox as a species to a whole new dimension, and we are still trying to understand how to use it.

There is no consensus about graphene ever replacing silicon, what’s your opinion on this?

That will not happen, in my opinion. A decade ago, there was a lot of hype over the idea that graphene would replace silicon, but developing its applications in electronics will take two or three decades, and now we have dozens of new 2D materials. Graphene will be used to make faster electronics – at some point one of these materials will replace, or be a great asset to silicon. For instance, some of our partners in Spain already integrate graphene in silicon circuits.

There is still too much hype around graphene. We are human, and our great expectations usually go beyond reality. But we need to understand that basic research, carried out at universities, may see the light in ten, twenty years if ever. Now, people have discovered that you don’t need pristine graphene for some applications that, instead of revolutionary are just ‘evolutionary.’ I like to call it ‘diffusion’ – these materials diffuse into the market, even if properties are just enhanced by 50% and revolutions are yet far to come.

Both academics and journalists should understand how real life works. Everything changes gradually. Moving from basic research to a consumer product requires, at least, one generation. Graphene did not start the race in 2004, but several years later, when we started producing it in large quantities. Now we have new companies, real-life products, and new enhancements.

“Moving from basic research to a consumer product requires, at least, one generation”

Should we change our perspective and understand that scientific revolutions do not exist?

We cannot change that. We have been raised in a world full of the immediacy of software, apps, and the internet. Everyone expects the same, quick developments in graphene – which is a new material. People believe Bill Gates invented computing and Mark Zuckerberg created social media, but in reality, it took almost a whole century to kick off the silicon revolution and develop the first computer. We need to lower our expectations.

What is the greatest challenge for graphene now?

Graphene is mass produced in high quantities, but not with quality yet. It is broadly used, but the quality is insufficient for high-tech applications. It needs time – time to find applications, time for us to learn to make it better, and cheaper. Just wait for it. It happened the same with silicon.

You have few patents, and graphene is not amongst them. Why not?

I have always been sceptical about what to patent, it’s hard to protect all with a single filing. Plus, they are expensive – you need hundreds, thousands of euros, and then you must keep supporting them for twenty years. Had we patented graphene back in 2004, the patent would be close to its expiration date without having many products around.

In fact, I am quite sceptical about patents in general. I have about ten of them, and none has yielded money – some might in five years or so. It all involves a very complex mechanism – you need to establish which area needs protecting, you need to communicate with industry to meet their needs, find new application areas and protect them too. People believe you patent ‘an idea’ and you go lay down for a while, smoking a cigar while you wait for the money to come. That is rarely the case. You can use patents to protect products, but until you get one, you have nothing.

You claim that we face a “knowledge crisis” and that our rate of discoveries is now slower than ever. But we tend to think that there are more inventions every day, and they come quickly. Could you explain why you say that?

“We are like athletes running so fast that they don’t notice they are going to die, exhausted. In our case, death will come from the lack of basic knowledge that feeds applications”

We live on knowledge generated long ago; discoveries made during the last century. We are like athletes running so fast that they don’t notice they are going to die, exhausted. In our case, death will come from the lack of basic knowledge that feeds applications. You blink your eyes and there’s a new technology, a new app that makes them millionaires. Bitcoin appears, and everyone’s suddenly rich. But as far as I know, Bitcoin has just contributed massively to global warming because of all the electricity it requires.

People often forget the ties between basic science and prosperity. We wondered what would happen if we made graphene thinner and thinner. Someone could have said: ‘Who cares? Why is that useful?’. But discoveries are divided between those which have been applied, and those which haven’t yet. There is nothing purely basic – everything can eventually be applied. Look at Einstein’s theory of relativity: ‘It’s all lunatic academics that look for something irrelevant.’ Half a century after that, we got GPS.

These thoughts remind me of something Buzz Aldrin said: ‘You promised me colonies in Mars. Instead, I have Facebook.’

You need both. I don’t like Facebook, or social media – or Bitcoin for that matter, although I have been quite lucky with that. But I see the whole picture: these advances create quicker, more efficient interactions amongst people. It’s like Google, but nobody blames them. Facebook, Twitter make our communications more efficient, and that is key to our species.