“Magnetism in graphene can be controlled with hydrogen atoms”

Graphene has extraordinary mechanical and electronic properties, but no magnetic properties. This can be made up for with the help of the lightest element: hydrogen, which transfers its magnetic moment on coming into contact with graphene. This has been demonstrated by a team of European scientists coordinated by the physicist Iván Brihuega from the Autonomous University of Madrid. 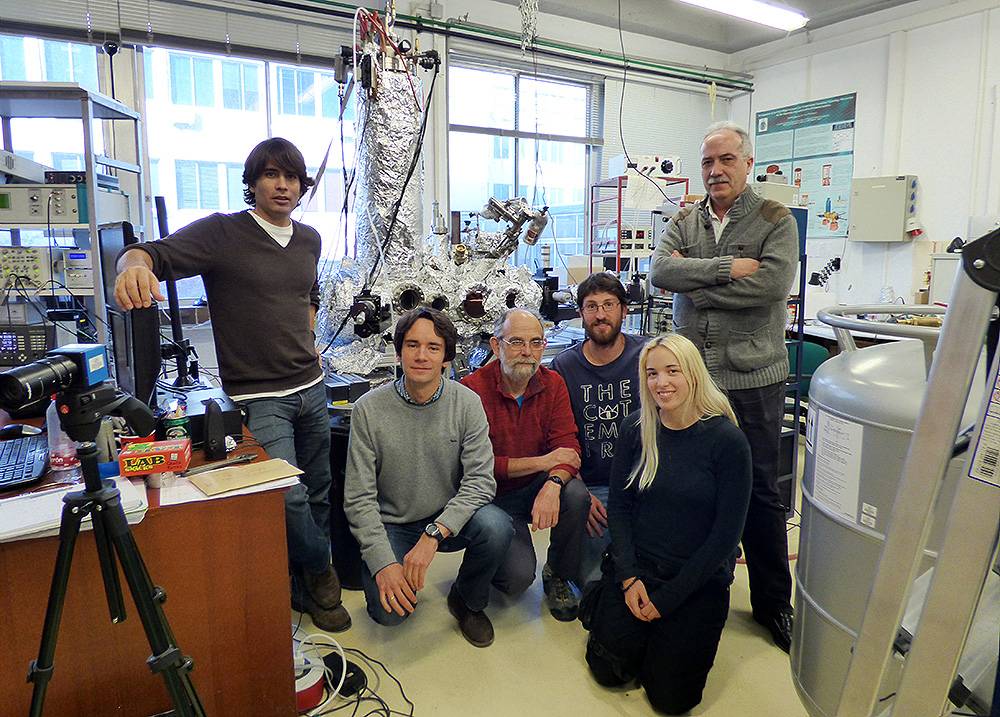 Part of the HiMagGraphene project team next to the tunneling microscope. On the left, Iván Brihuega, with other scientists from the Autonomous University of Madrid and the Institut Néel (CNRS, France). / UAM/HiMagGraphene

Since graphene was obtained for the first time in 2004, laboratories across the globe have tried to include magnetism in the long list of properties of this two-dimensional material formed by carbon atoms.

Under the European Graphene Flagship initiative, three research groups from Spain, France and Germany have begun to demonstrate experimentally that graphene can be magnetized through the adsorption of individual hydrogen (H) atoms.

The project, called HiMagGraphene, is coordinated by Iván Brihuega (Madrid, 1975) from the Department of Condensed Matter Physics at the Autonomous University of Madrid (UAM).

What happens when graphene and hydrogen bond?

Exactly what happens during the process?

The magnetic moments produced interact strongly across large distances (in comparison with the atomic scale) following, moreover, a special rule: these moments build up or are neutralised depending on the relative position of the hydrogen atoms on the material. The structure of graphene, made up of carbon atoms arranged in a hexagonal shape, can be considered two triangular subnets, and if the hydrogen atoms are positioned on only one of these, magnetic moments build up. However, they are cancelled out when one hydrogen atom is positioned on each subnet.

How do you move the hydrogen atoms?

Using a powerful scanning tunneling microscope, which we use to individually visualise and manipulate these atoms. In this way, we establish the magnetic properties of selected regions of the graphene. We carried out the experiments in the Institute of Condensed Matter Physics (IFIMAC) of UAM, and the results have been complemented with sophisticated theoretical calculations. We presented the details last year in the journal “Science”.

Have you published more papers related to the project?

In 2016, together with co-workers from the Basque Country, we published another study in ”ACS Nano” in which we demonstrated how some properties of graphene vary when a metallic substrate is positioned beneath it. To be specific, the possibility of producing magnetic moments no longer exists. And in 2017, we published a study in ”The Journal of Physical Chemistry B” on the selective adsorption of hydrogen in rotated bilayers of graphene.

Which other groups are taking part in HiMagGraphene alongside you?

Two other groups. One is the Institut Néel in Grenoble (CNRS, France), which provides various types of graphene samples grown on silicon carbide. And the other is the German group from the Max-Planck-Institute (MPI) in Stuttgart, which has a unique infrastructure in scanning tunneling microscopy. We collaborate with them taking measurements at a very low temperature (lower than 1 Kelvin) and with high magnetic fields (up to 14 teslas).

Which phase of the project are you currently in?

HiMagGraphene is a three-year project which ends in November 2018. We are currently studying how to manipulate H atoms on the surface of graphene on a very large scale and with atomic precision in order to selectively modify their properties. We are also investigating the evolution of the magnetic moment produced in this material by H atoms –which we call spin polarised state– is currently being investigated depending of two factors: the magnetic field applied and the temperature of the sample.

Is spintronics a potential application of magnetic graphene?

A priori, it is an ideal material for use in spintronics, a promising technology which aims to substitute traditional electronic technology transmitting simultaneously magnetic (through spin) and electronic information. This could give way to a radically new generation of computers. The results of our project, which prove the possibility of generating magnetic moments which can communicate across large distances in graphene, anticipate a brilliant future for this material, both in the emerging field of spintronics and for its use in flexible and biocompatible magnetic devices. Furthermore, the ability to manufacture magnetic graphene would give us plastics and even magnetic textiles and nanoparticles for treating cancer. 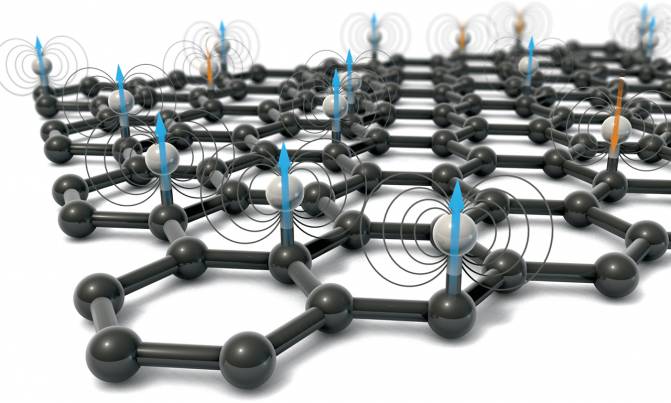 Magnetic moments are generated when hydrogen atoms bond with carbon atoms on the graphene lattice, comprising two subnets. The moments align ferromagnetically (blue) when they are on the same subnet, and antiferromagnetically (orange) when on opposite subnets. / C. Bickel/Science