Physics
She researches at the Instituto de Nanociencia de Aragón

Mario Peláez, from Asturias (Spain), is unique in his way of sharing knowledge. This doctoral student dresses in queen clothes to talk about research and call out the discrimination against women, people of colour (POC) and the LGTB+ community in laboratories. She had her social debut at the biennial Euroscience Open Forum (ESOF) congress, with the support of the European 'Enabling Excellence' scholarship. 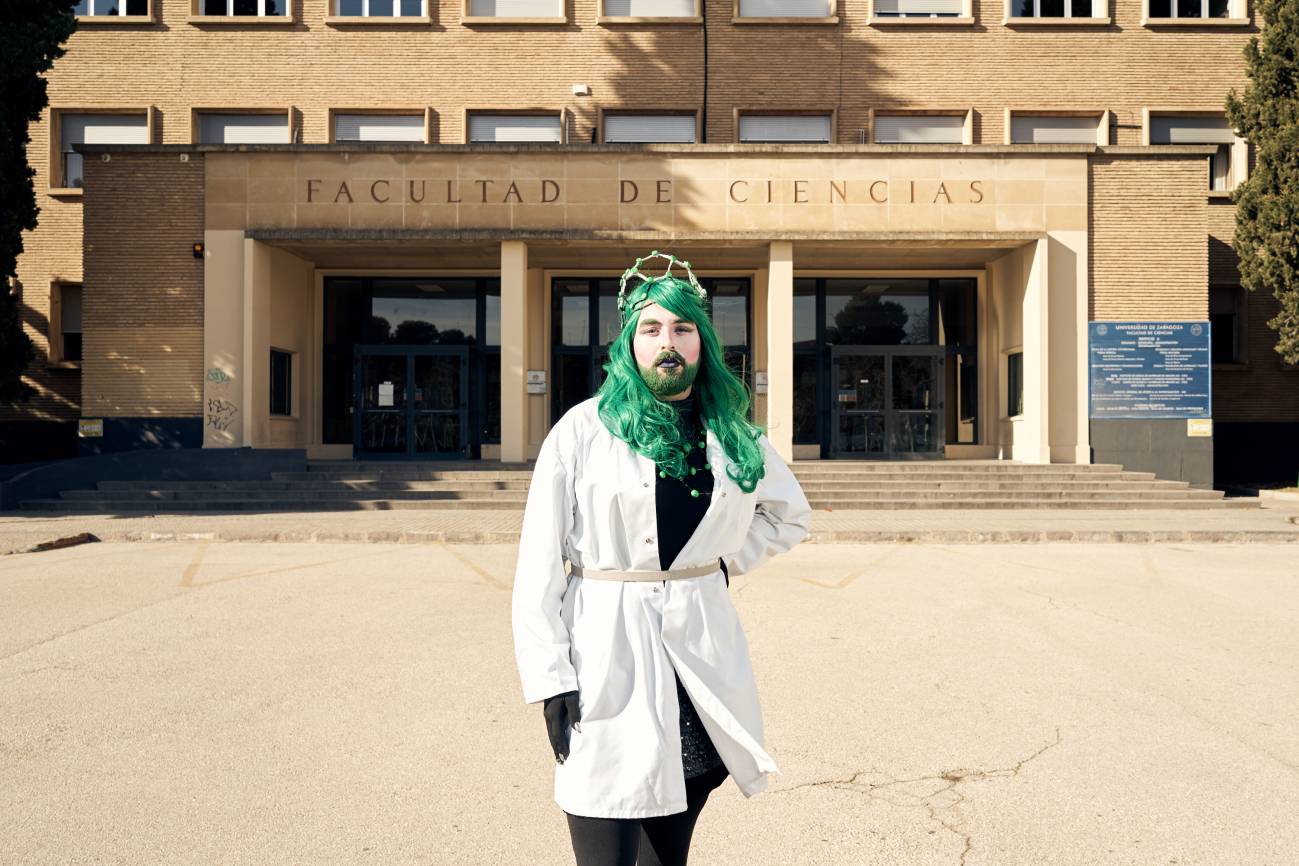 Sassy Science at the door of the Faculty of Science of the University of Zaragoza / Víctor Serrano, SINC

She keeps her balance walking on her four inch heels. Her makeup is flawless and she wears coloured contact lenses that give her a feline look. Her mane contrasts with a dark beard. Reminiscences of the Eurovision singer Conchita Wurst are inevitable. She’s been told more than once. She dresses in rigorous black and does not leave an inch of skin uncovered: long-sleeved T-shirt, printed miniskirt, stockings and gloves that do not prevent her from displaying her fluorescent manicure.

“I'm very hairy,” she said, vainly, while fanning herself during a very hot evening in July 2018, in the City of Space in Toulouse (France).

The atomic structure of graphene, the material of the future due to its promising properties, enveloped her hair and neck. She did not go unnoticed among the scientists and journalists who were eating and drinking champagne at the reception of the biennial Euroscience Open Forum (ESOF) congress.

She is Sassy Science, the world´s first drag queen science populariser. “I've never seen anything like her. Maybe there are others... but I'm afraid not,” says Javier Armentia, the creator of the CienciaLGTBIQ website, who declares himself a “superfan” of the character. 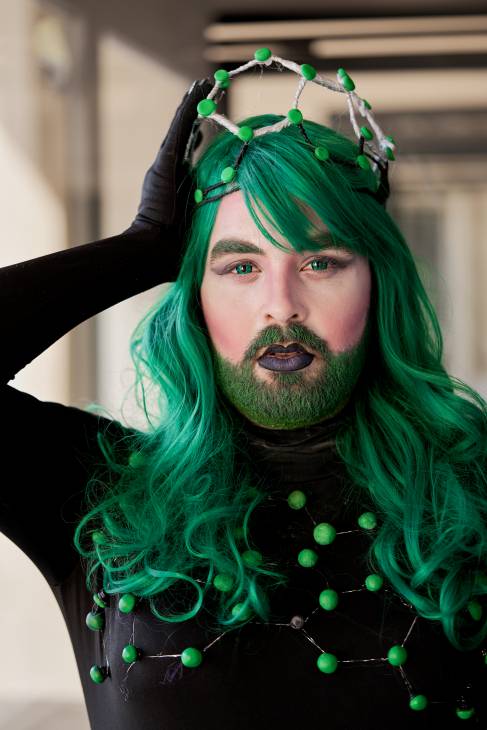 Sassy Science wears graphene around her neck and, when not in drag, she does research on nanomaterials. / SINC

Sassy Science is the alter ego of Mario Peláez (Langreo, Spain, 1992), a doctoral student at the Aragon Institute of Nanoscience who is in love with graphene. His drag queen outreach project emerged from the communication workshop he received at Enabling Excellence, an international training network of 13 PhD students in nanosciences and nanotechnology, funded by the European Union.

“I'm Dr. Sass, an openly bisexual LGBT activist, amateur drag queen and a PhD student in Physics,” as he introduced himself in perfect English in the first video

“Mario's project amazed me,” comments Chris Ewels, coordinator of the European project, who stresses: “I've been involved in many outreach projects, but never in my career have I seen anything like Sassy Science.” Ewels explains that at first he did not quite understand Mario's idea and remembers watching the drag queen videos he sent him with scepticism. Now he cannot help feeling like “a proud father.”

Peláez has always been clear, though: “Communication is a cornerstone for doing science, whether it be writing a good article, giving a good talk or presenting a good poster.”

In Toulouse, her poster was the only one with a tablet showing her YouTube videos: “I'm Dr. Sass, an openly bisexual LGBT activist, amateur drag queen and a PhD student in Physics” she presented herself in perfect English in the first video she posted last July. 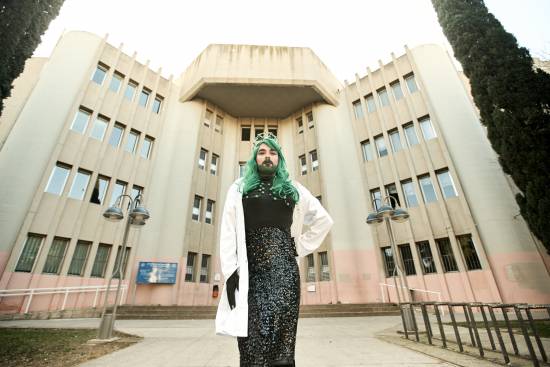 “Communication is a cornerstone for doing science, whether it be writing a good article, giving a good talk or presenting a good poster,” says Sassy Science. / SINC

Like any good millennial, Mario Peláez relies on social media to disseminate science and denounce the discrimination among researchers against young women, POC and the LGTB+ community in the STEM disciplines, which include science, technology, engineering and math. “I think drag is a good tool to empower these groups,” he states. He then reveals his plan B to change the situation: glitter!

So far, he has profiles in Instagram and Twitter, and YouTube channel, where he has already started to upload some videos about “queens”, as he refers to current and historical researchers, who are and were invisibilised. “Mario uses the media his community uses to reach his desired audience,” Ewels points out.

On his YouTube channel you can already find videos about the chemist Rosalind Frankin and the physicist Lise Metiner. He says he also wants to record more about Ada Lovelace and Marie Curie, although he jokingly admits that the Polish scientist “would need a whole special”. Aware of his privileges, he claims: “I want to look for a woman of colour (WOC) because this is starting to look a lot like white feminism.”

So far, the reactions to his persona have been positive. Mario says he feels “very welcomed” by the European project that saw the persona’s birth and the laboratory where he works. For his part, Ewels acknowledges the young man's effort: “Mario is passionate about what he does and Sassy Science has taken him out of his comfort zone. There is a great deal of merit in attending a congress [ESOF] with thousands of participants while doing drag.”

The resurgence of drag

There is not a single definition of what constitutes a drag queen. Many agree that the concept refers to a man who dresses as a woman and acts in accordance with the stereotypes socially attributed to one. Their expression is exaggerated and they usually confine their appearances to bars and shows. 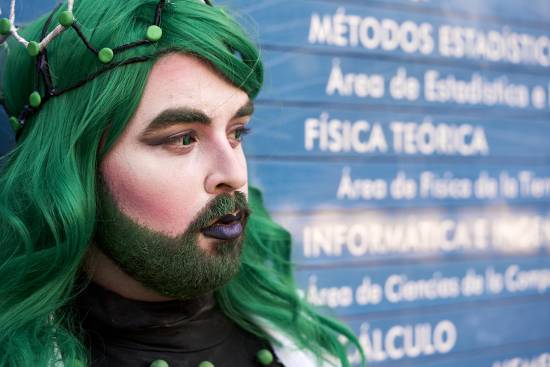 Mario Peláez next to the sign that indicates the different departments of his university. / SINC

But there are others who have a broader view. “We are all born naked and the rest is drag,” sings the American drag queen RuPaul in one of her songs. The artist has just released the fourth and final season of the reality show RuPaul's Drag All Stars Race on the Netflix platform, in which different drag queens compete for a prize of 100,000 US dollars and a place in the hall of fame.

For Mario Peláez, drag is an art with which he came into contact a couple of years ago through the Somos LGTB+ association in the region of Aragón, where he was already doing activism and there is a lot of drag culture. “The creation of the drag identity rarely takes place on an individual basis. Drag families are a great community to turn to for creative and emotional support,” states Steven J. Hopkins of Virginia Polytechnic Institute and Radford University.

He uses drag to popularise science without complexes: “I do this from an enormous respect for the drag culture, which has always been a driving force for activism and the fight for LGTB+ rights”

Now, Peláez uses drag as a means to popularise science without complexes. “I do this from an enormous respect for the drag culture, which has always been a driving force for activism and the fight for LGTB+ rights” he remembers. “Drag has made me think a lot about gender issues and my privileges as a cis white man. There are small micro-sexisms that people don't take into account,” he stresses.

Mario is not afraid that his persona will eclipse science itself: “Scientific communication is for people to acquire an interest in it, not to get a master's degree in Physics. And above all, it's for making them understand that science is important and that everyone can do it.”

Next July, Mario will present his doctoral thesis. “For me, science is the greatest thing. Although it requires a lot of sacrifice and I'm not going to see it through rose-tinted lenses, I can't imagine my life without doing science.” His research focuses on the electron microscopy of two-dimensional nanomaterials, such as graphene, which is what surrounds his neck whenever he is in drag.

Updated 23 January 2019. Apart from Sassy Science, Lana Vuli is another drag queen who also popularizes science. In 2017 she presented the cabaret 'Seafood Tango' and, as she informed SINC, she will soon also start with a YouTube channel. She is the alter ego of the doctor in Environmental Chemistry Òscar Aznar.