A team from the University of Salamanca has developed a tool that allows a 3D journey in ten sites of geological and palaeontological interest in the Guadalquivir basin (Huelva, Spain). In the virtual tour, developed with Google Earth, you can visit and explore treasures of this area, such as records of the opening of the Atlantic Ocean, using tablets and smartphones. 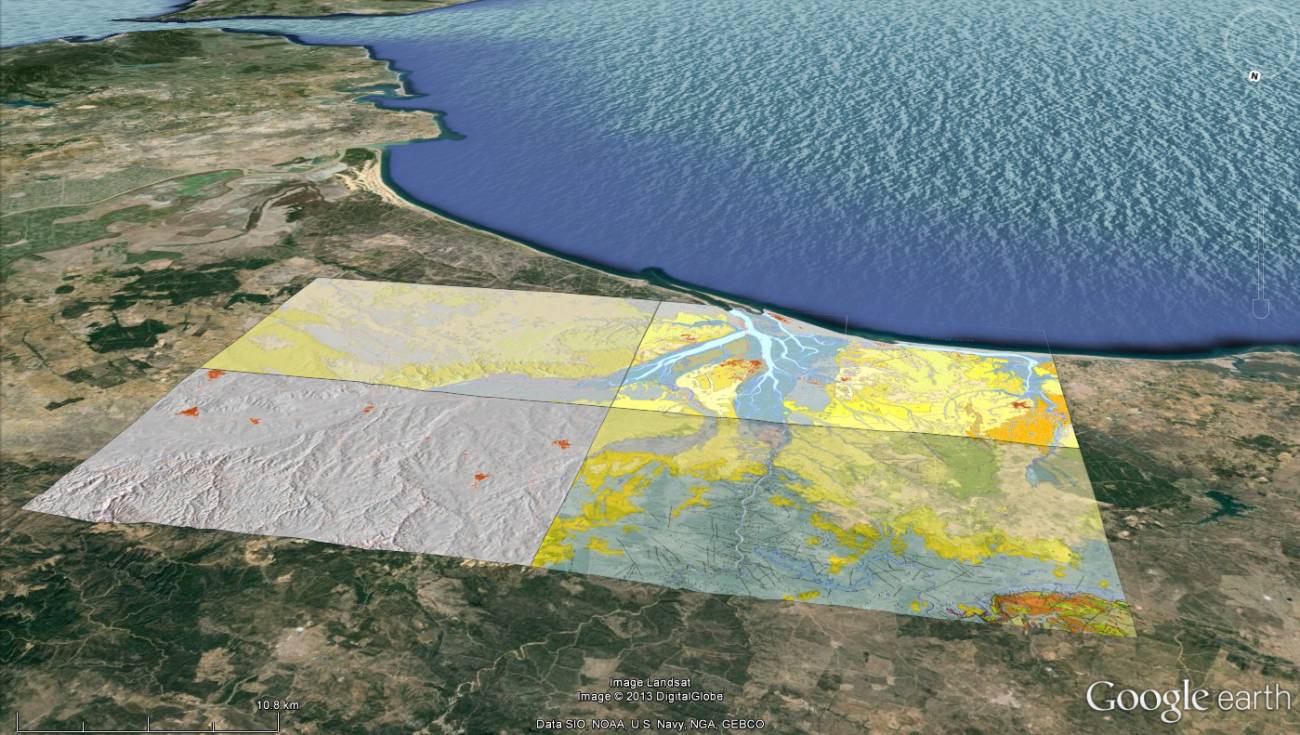 Distribution of thematic layers on a scale of 1:50,000 over the satellite images of Google Earth. Above shows the area left of the Strait of Gibraltar. / USAL

Researchers from the University of Salamanca (USAL) have designed a geological and palaeontological virtual tour in 3D in which various locations can be viewed around Huelva. The tour includes, among many other conserved treasures, five-million-year-old marine fossils. The results of the project have been published in the journal Environmental Earth Sciences.

As Antonio M. Graña, professor in the Geology department at this university and co-author of the study, comments to Sinc, “the objective is to showcase the geological and palaeontological heritage of the area and generate educational resources and research.”

Building on the extensive experience of the team in the Upper Neogene deposits in the province of Huelva, on the western edge of the Guadalquivir basin, “we wanted to do something different to bring geology and palaeontology closer to earth science students, using the abilities of Google Earth and everyday technologies such as tablets and smartphones.”

In particular, Graña indicates that geo-informatics tools have been applied, such as the geographical information system ArcGis 10.2, “to produce a virtual 3D tour of the geo-referenced sites including multiple digital layers grouped by geological and topographical maps, digital terrain models and orthophotos”.

The educational resources generated, which include a virtual route, flight simulator, field notebook with questionnaires, videos and augmented reality, are implemented with models and mapping. They can be downloaded free of charge from the homepages of the Spanish Geology and Mining Institute (Instituto Geológico y Minero de España) and the National Geographical Institute (Instituto Geografico Nacional).

Each stop on the route of the ten interest sites selected “contains descriptive and graphical elements which can be seen on Google Earth’s free virtual globe, together with diagrams, photographs and information factsheets to quantitatively evaluate the scientific, educational and cultural value of each site of geographical and palaeontological interest,” the expert highlights.

Using this 3D digital geological database, a virtual flight route is proposed which can be shown in video format and is compatible with smartphones and tablets.

As the professor says “When you start getting closer with these virtual flights you can see how the geological mapping is superimposed on the orthophotographs loaded in Google Earth. We can zoom in or out to get closer to or distance ourselves from the geosite, analysing the geological context of the study sector. The tool also gives us an overall spatial view of the route and places us on the different geological and palaeontological materials available in 3D.”

The tour also allows us to observe the topographical position and the sequence with other lithologies. To enhance the virtual tour, “each stop is bursting with graphical documentation from the different information factsheets, field photographs of the actual outcrop and even sometimes includes the Google streetview option to analyse the structure and the outcrop that we want to visit on the route,” he adds.

The virtual flight can directly record a route in which the different layers that are superimposed on the satellite image and aerial photos of Google Earth can be activated or deactivated.

“The flight can be created directly from the computer keyboard or by guiding the flight simulator with a joystick”. It can fly over the map and geosites as if it were a videogame and you can choose different types of plane and observe the different panoramas using the controls,” says Graña.

The ten geosites on the geological and palaeontological tour of the Guadalquivir basin have been selected for different reasons. “Some have records of the opening of the Atlantic ocean in the Mesozoic, such as pillow lavas (similar to that found in the Atlantic part of Iceland) located between the towns of Niebla and Bonares, next to the Seville-Huelva motorway”, he adds.

Another of these locations “contains five-million-year-old marine fossils which are found in the same place in which they lived, which allows for palaeoecological interpretations of the characteristics of the Pliocene sea”. This site is in a place known as Casa del Pino, next to Bonares.

The virtual 3D tour also includes geological stops located in places where scientific surveys have been made up to 250 metres in depth in which many environmental changes have been dated with great accuracy by studying calcareous microplankton (next to the bullring in Huelva and next to the Montemayor chapel in Moguer). Graña explains that these explorations are mentioned in numerous international publications.

The team from USAL does not limit itself to the area of the Guadalquivir basin in its projects. It has also made a 3D geological tour of the Protected National Park of Las Batuecas (Salamanca) and is now developing a 3D georoute on foot of a stretch of the Portuguese Algarve.

Other initiatives include similar routes relating to the Miocene in Lisbon, one of the most representatives in Europe, as well as on Lanzarote and the island of Maio (Cape Verde), concludes Graña.