Acacias are invading unaltered areas in the northwest of the peninsula

The legume Acacia dealbata, also known as mimosa, is one of the most aggressive invasive tree species in the world. In the northwest of the peninsula its propagation is an increasingly serious problem since it is penetrating unaltered plant communities, according to a study by the University of Vigo and the University of Coimbra (Portugal). Scientists stress the important role of fires in their dispersal and conclude that natural scrubland could be an effective barrier to slowing down rapid invasion. 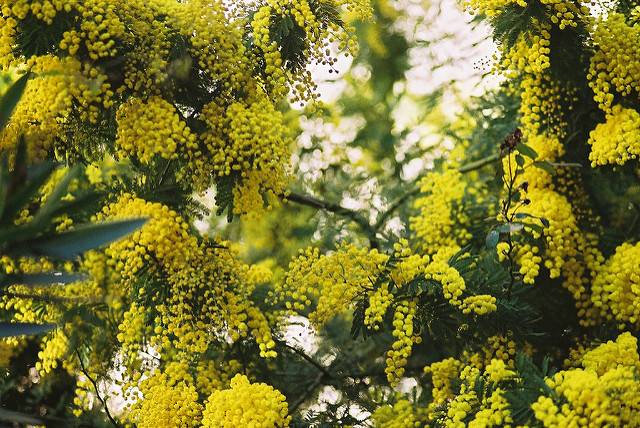 The number of populations of Acacia dealbata or mimosas in the northwest of the peninsula has increased in a concerning manner over the last few years and the space occupied by this species is ever greater. This increase is occurring considerably both in disturbed areas and in peri-urban areas, proximities to communication routes –roads and railways- and in forest plantations of eucalyptus and conifers, such as pine.

Scientists from the University of Vigo (UVigo) and the University of Coimbra (Portugal) have studied the behaviour of this species to evaluate whether the growth of mimosas is related to environmental factors in unaltered scrublands and pine forests in the northwest of the Iberian Peninsula.

“The A. dealbata invasion process is favoured mainly by environmental disturbances. However, we have detected that this species is invading plant communities that had been unaltered until now and the environmental factors that influence its propagation in these ecosystems continue to be unclear,” Jonatan Rodríguez, researcher at UVigo and co-author of the study, told SINC.

The researchers put in place permanent sample plots along the edge of the invasion in each plant community and recorded the increases in the height and diameter of the stem in marked specimens over two years. The number of new acacia trees was recorded at the end of the study.

Some of the environmental factors that were assessed were the physiochemical properties of the soil, the native plant cover and the characteristics of the plot, in order to determine their effect on the growth of invasive trees. “We found a different growth pattern in the mimosas depending on the plant community studied,” indicated the researcher.

The pine forests had mimosas with significantly greater height and diameter increases and a greater number of new acacias than the scrublands. Furthermore, it was found that spring favours the growth of the invasive species in pine forests, while growth does not vary throughout the year in scrublands.

Can we put an end to the invasion?

The impacts caused by this species are well-known: reduction of light in the underbrush and of the availability of water in the soil causes soil acidification, increases the soil’s nutrient content, alters microbial communities and the enzymatic activities of the soil, and decreases the native plant cover, as well as the diversity of species in the underbrush.

The weather conditions in Galicia, similar to those of its place of origin in Australia, help this species to become established and naturalised. Furthermore, other studies highlight the importance of other factors, such as the releasing of natural enemies and mutualistic relationships with other organisms, which help the mimosa to advance in an invasive manner.

“As an observation outside the study, we also saw that winter frosts can affect it considerably, particularly in the flowering period. However, its ability to acclimatise allows it to live at heights that it does not reach in its place of origin. In fact, in A Serra de O Courel we found it at 1000m,” said the scientist.

Until today, various studies have dealt with the control of this species through mechanical control along with the application of herbicide to the stump, which has been very effective. “Another technique being carried out in Portugal, and which we are trying out in Galicia, is the stripping of the tree bark so that the root dries out and the tree subsequently dies,” explained Rodríguez.

In addition to these control techniques, it is important to highlight the ecosystem conservation work and avoid exotic forest plantations. The environmental factors that occur in a well-conserved scrubland reduce the speed of growth and the appearance of new acacia individuals in comparison with the pine forest conditions.

The team of scientists concluded that the natural scrubland could be an effective barrier for slowing down the rapid invasion of mimosas and it suggests that their management in pine forests must have preferential treatment in southwestern Europe.

“They are suffering similar problems throughout Portugal with the invasion of various acacia species. As such, we consider that it would be important to join forces to tackle the problem and make it impact the whole peninsula, since plants don’t have borders,” concluded the expert.