Bohr’s atomic model was utterly revolutionary when it was presented in 1913 but, although it is still taught in schools, it became obsolete decades ago. However, its creator also developed a much wider-ranging and less known quantum theory, the principles of which changed over time. Researchers at the University of Barcelona have now analysed the development in the Danish physicist’s thought – a real example of how scientific theories are shaped. 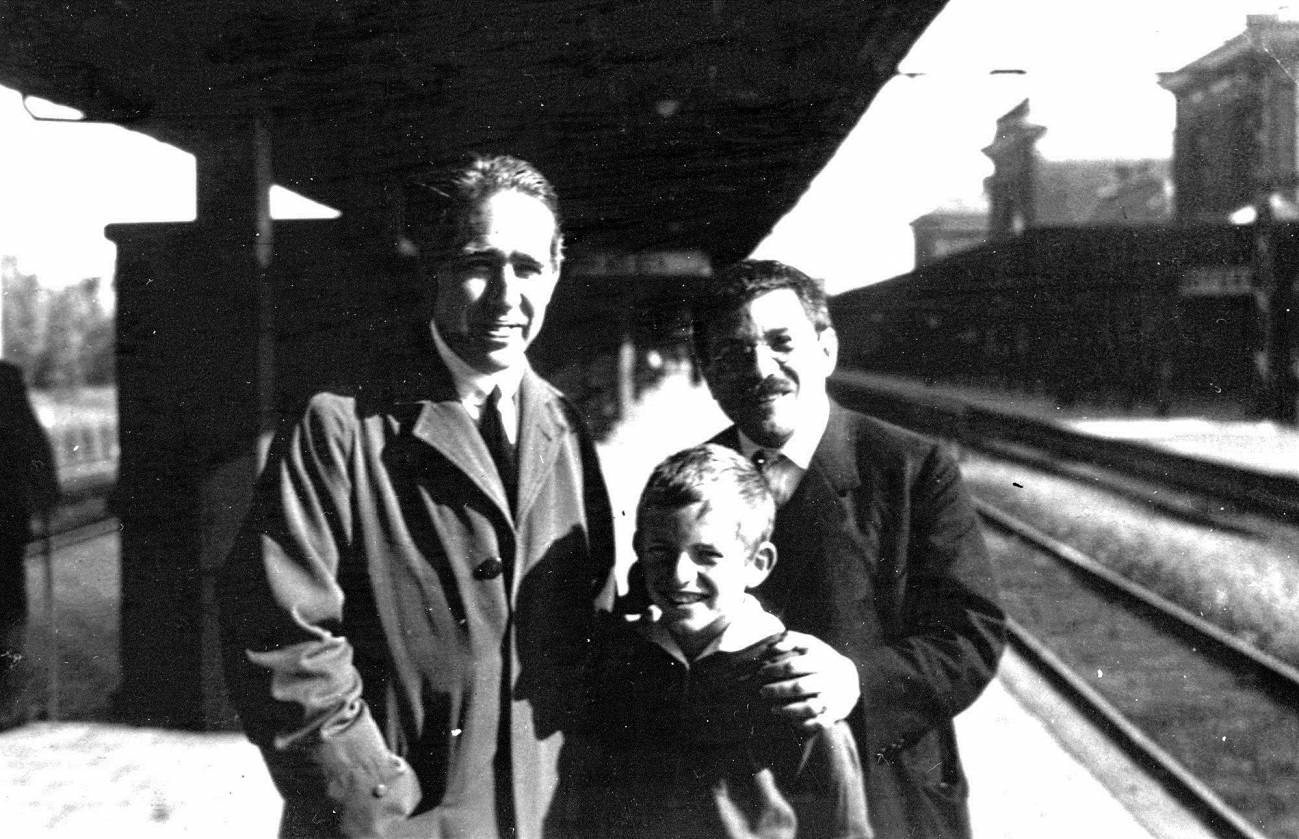 Niels Bohr and Paul Ehrenfest (with his son) at Leiden train station (Holland) in 1926. / Credit: Courtesy of the Niels Bohr Archive, Copenhagen

Most schools still teach the atomic model, in which electrons orbit around the nucleus like the planets do around the sun. The model was proposed more than a century ago by Danish physicist Niels Bohr based on Rutherford’s first model, the principles of classical mechanics and emerging ideas about ‘quantisation’ (equations to apply initial quantum hypotheses to classical physical systems) advanced by Max Planck and Albert Einstein.

As Blai Pié i Valls, a physicist at the University of Barcelona, explains to SINC: “Bohr published his model in 1913 and, although it was revolutionary, it was a proposal that did little to explain highly varied experimental results, so between 1918 and 1923 he established a much more wide-ranging, well-informed theory which incorporated his previous model.”

Bohr’s theory, which was named quantum theory, proposed that electrons circle the nucleus following the classical laws but subject to limitations, such as the orbits they can occupy and the energy they lose as radiation when they jump from one orbit to another. But it also attempted to explain in a unified way all the quantum phenomena that had been observed to date.

“This theory rested on two fundamental pillars: the adiabatic principle, a method to find possible quantum states within the atom; and the correspondence principle, which links classic electrodynamics with the new quantum theory forged at that time,” explains Pié i Valls who, together with Professor Enric Pérez, has published these historical analyses on the topic in the journal ‘Annalen der Physik’.

The authors studied the use Bohr gave to the adiabatic hypothesis from when Austrian physicist Paul Ehrenfest set it out in 1911 until his Danish colleague raised it to a ‘principle’ and developed it to get the most out of it. They also detected the mutual influence there was between Bohr and German physicist Arnold Sommerfeld, who advanced his own formulation of ‘quantification’ and had a significant influence on developing the old quantum theory, the backdrop against which all the studies prior to the birth of quantum mechanics in 1925 were set.

The importance of the principles changes with time

The authors bemoan the fact that Bohr’s quantum theory is much less widely known than his atomic model, “obsolete since 1925, but which is still explained in schools today due to its considerable educational value and out of pure pragmatism: it is impossible to teach a theory as complex as quantum mechanics at certain levels.”

This situation, however, has led to the public wrongly having the idea that the Bohr model is still valid, when the modern vision of the atom is in fact governed by the probabilistic laws of quantum mechanics, which force us to imagine the electron as delocalised, as a “probability cloud” around the nucleus of the atom.

All gases expand at unique rates with change in temperature. There is no "universal gas constant". Anyone who says there is a universal gas constant is lying. The so called "Boltzman Constant" is not a physical constant. Dividing the fake "universal gas constant" by an arbitrary number called "Avagadro's number" ( a number completely unknown to Amadeo Avagadro) is
called the "Boltzman Constant". It is no physical constant. This fraud is incorporated into Max Plancke's theory of black body radiation. Quantum theory depends upon believing theses lies and upon ignoring the fact that no coherent description of the black body radiation experiment is provided.

Bohr's model of the atom, like much of theoretical physics is outdated. Even String Theory the much vaunted and recently fadish attempt to unite gravity with quantum mechanics is proving to be a, by and large, dead-end that has lead to little if any advances in our understanding of the universe.

It appears the universe is much stranger than we can currently imagine. (Think of Dark Matter and Dark Energy which perhaps make up 95% of the universe of of which our scientists know essentially nothing.)

Perhaps some fundamental revolution in our thinking will have to occur before we can really know what the universe is about.

Well its good to see you delete a NEW truth about the electro magnetic structure of water.
This is for the moderators as your book burning mentality of perpetuating the Bohr scam must remain secret eh?
We have constructed more than a dozen prototypes where any liquid can pass through a series of Ferrite Ring magnets, from raw sewerage, acid mine waste, saline or oily or a combination of both and the liquid exits as PURE fresh drinking water. To reverse the magnets fresh water exits as nice crude oil. Bohr and all of you acedemia are so outdated and entrenched in the slave mentality of Standard oil and Westinghouse's meters its a death sentence to show you this in any other way that in person. But you will delete this too. So do your bit for the stupidity of man. PS I write on Thunderbolts.info forum trying to explain how the above is done and well they seem to have closed minds like found here as moderators too. But with 26 years and 1000's of experiments, we know that one day you will remember when you were first introduced to the truth... magneticwaterscience.com

Now that I have your attention. Yes for 26 years we have been playing with water. And yes 1000's of experiments and literally 100's of highly educated people as witnesses. This just cant be put on youtube for the national security issues. We have been placing Stainless steel antenna arrays powered up with DC energy from both batteries and AC to DC sources. The first commercially available device in 1996 the BEFE unit or Bio Magnetic energy device has now gone on to become the focus of of Phd and further research at Memphis. But the Electro-magnetically restructuring of any liquid into fresh water and the equal and opposite is too highly classified except to those who venture to Aust for a personal demo. And literally 100's have.
To explain this Magnetic water science and how to make water burn like gasoline with just the addition of DC for a few seconds one needs an entirely new Atomic Structure, which by the way, is an advancement of Russellian Science and our devices are much better than Keshe's devices and an upgrade on his Theories too.

I could go on for hours about the devices and what they do for the construct of matter and the duplication of the earths magnetic fields upon underground water and abiotic origin of oil and coal. Suffice to say this is repeatable but not for publication.
So the New Atomic Structure of the Entire Universe is more inline withe the theories of the Plasma or Electric Universe.
In its simplistic explanation, it goes like this. There is but one singular piece or Structure of Light as Keshe puts it. This "bar of light" is magnetic in nature and 6 of them come together in a 4 sided pyramid. This 4 sided pyramid is the "Atom" Democritis spoke of. Thales said "everything is Water" and the natural harmonic state of the structures that these 4 sided pyramids make is WATER. What separates gold from wood from air to rocks and everything inbetween is the Magnetic Reasonant Field Pattern of these pyramidal conglomerates. Or snow flake patterns. So to Electromagnetically restructure water into oil one uses the South Pole energy force by orientating the Sth ploes in relation to the flow of water when applying the magnetic field to water. And Just like Spring water is quite pure, the North pole energy is applied to the liquid be it raw sewerage or acid mine waste to 'purify' the Snow Flake pattern of the water. This Electomagnetic nature of Water and its crystalline structure is most evident in Emoto's water structure studies. As everything has a polarity even the human body, its then understood how the mind can influence the Emoto water crystal. The downside is that if the human conducting the experiment is very sick, either physically or mentally the equipment can or may be influenced or downgrade the oil produced so to speak. We have ways to over come this but thats the IP and its not going to be patented as they kill countries for this level of control.
I thank you for the importunity to present an alternative to the purely theoretical nonsense of Bohr and present this limited discourse of what anyone can view if you just get up from the internet and do some Field research... pun intended.
Its all at magneticwaterscience.com and do ask for the password to see the above mentioned experiments on video there.