Quintessence and phantom fields, two hypotheses formulated using data from satellites, such as Planck and WMAP, are among the many theories that try to explain the nature of dark energy. Now researchers from Barcelona and Athens suggest that both possibilities are only a mirage in the observations and it is the quantum vacuum which could be behind this energy that moves our universe. 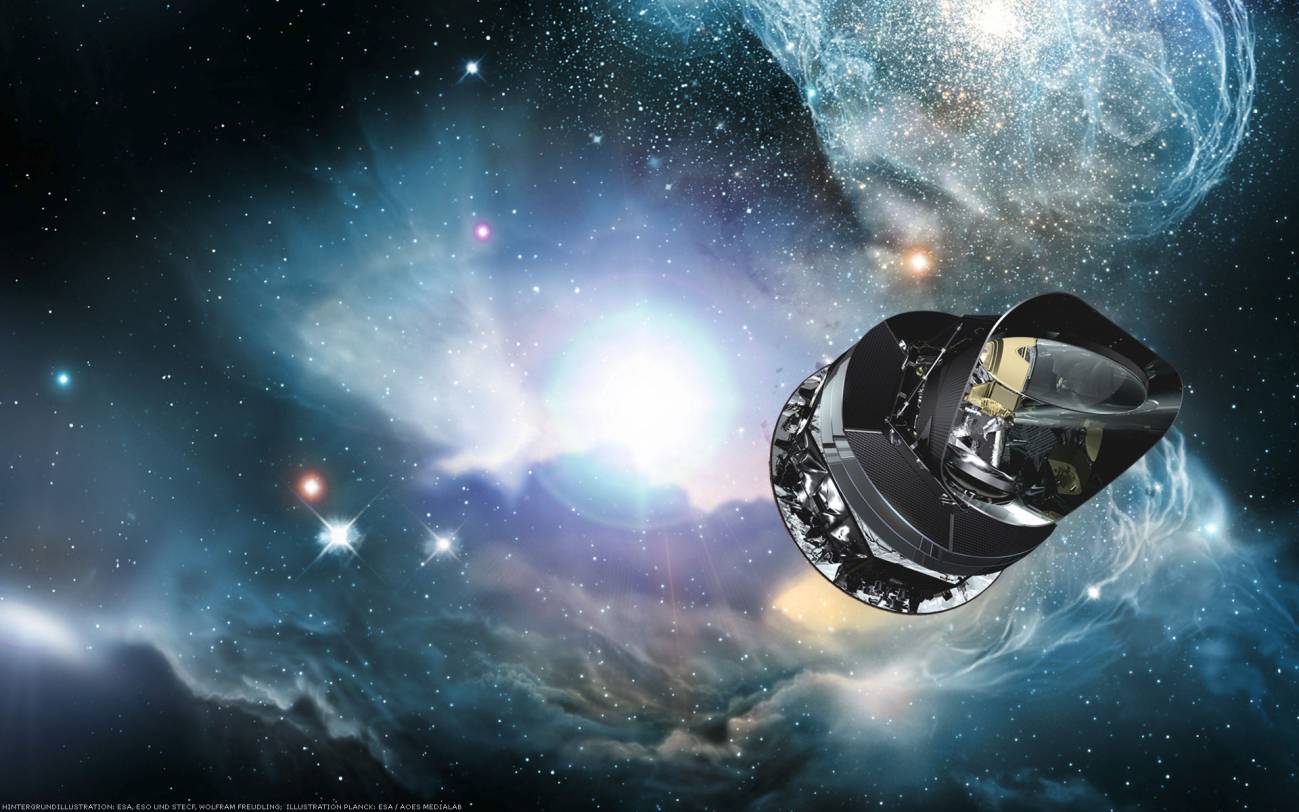 Cosmologists believe that some three quarters of the universe are made up of a mysterious dark energy which would explain its accelerated expansion. The truth is that they do not know what it could be, therefore they put forward possible solutions.

One is the existence of quintessence, an invisible gravitating agent that instead of attracting, repels and accelerates the expansion of the cosmos. From the Classical World until the Middle Ages, this term has referred to the ether or fifth element of nature, together with earth, fire, water and air.

Another possibility is the presence of an energy or phantom field whose density increases with time, causing an exponential cosmic acceleration. This would reach such speed that it could break the nuclear forces in the atoms and end the universe in some 20,000 million years, in what is called the Big Rip.

The experimental data that underlie these two hypotheses comes from satellites such as Planck of the European Space Agency (ESA) and Wilkinson Microwave Anisotropy Probe (WMAP) of NASA. Observations from the two probes are essential for solving the so-called equation of the state of dark energy, a characterising mathematical formula, the same as that possessed by solid, liquid and gaseous states.

Now researchers from the University of Barcelona (Spain) and the Academy of Athens (Greece) have used the same satellite data to demonstrate that the behaviour of dark energy does not need to resort to either quintessence or phantom energy in order to be explained. The details have been published in the ‘Monthly Notices of the Royal Astronomical Society’ journal.

“Our theoretical study demonstrates that the equation of the state of dark energy can simulate a quintessence field, or even a phantom field, without being one in reality, thus when we see these effects in the observations from WMAP, Planck and other instruments, what we are seeing is an mirage,” told SINC Joan Solà, one of the authors from University of Barcelona.

Nothing fuller than the quantum vacuum

“What we think is happening is a dynamic effect of the quantum vacuum, a parameter that we can calculate,” explained the researcher. The concept of the quantum vacuum has nothing to do with the classic notion of absolute nothingness. “Nothing is more ‘full’ than the quantum vacuum since it is full of fluctuations that contribute fundamentally to the values that we observe and measure,” Solà pointed out.illu

These scientists propose that dark energy is a type of dynamical quantum vacuum energy that acts in the accelerated expansion of our universe. This is in contrast to the traditional static vacuum energy or cosmological constant.

The drawback with this strange vacuum is that it is the source of problems such as the cosmological constant, a discrepancy between the theoretical data and the predictions of the quantum theory that drives physicists mad.

“However, quintessence and phantom fields are still more problematic, therefore the explanation based on the dynamic quantum vacuum could be the more simple and natural one,” concluded Solà.

There is no need for a phantom field which is shown by the below presentation.


How the particles move by resonating through the JAH Field
at v=c is set by the maximum constant linear relative velocity
moment spin of each JAH, which is stationary in the JAH Field
and with all alpha degrees of spin moment.

This theory is believed to provide answers to all the unanswered
questions in physics that are centered on the seminal equation :
the cube root of 10^-50ccm/10.^50 JAH=10-^33 1/3cm, which
governs the smallest possible associated diameter with
universal energy/mater, E, which diameter is that of the apparent length of a string.

The smallest dimension in space-time is the JAH frequency at
alpha equal to 90 degrees, which equals 10^-50m=JAH
lambda (wave length).

1. Galaxies reaching near light expansion velocity at the
edge of the universe disintegrate back to the JAH Field,
leaving gamma ray bursts and non-existent optical galaxy
photons, solving the mystery of the missing galaxies.

2.Where such gamma ray bursts occur, the background
radiation will show a slight increase relative to the
average 3 degree measured Solar System MBR, as the

burst permeates to the center of our universe. Because the

MBR is almost constant, this supports the Milky Way as being

located at the approximate center of the universe.

3.That Black Holes are areas where gravity has been
focused, ie.. Center of a galaxy, and the JAH Field is not
able to resonate any groups of JAH (matter) through the
field, causing no transfer of light photons. This applies to
any large areas of focused gravity, ie.. galaxy clusters,
creating a universe of many Black Holes of all
magnitudes. The same force, gravity-inertia, exists
between resonating JAH and the JAH Field, which is caused by
the attraction force of one resonating matter JAH passing behind
another resonating stationary JAH. The Cosmological constant

negative force is caused by the repulsion of resonating JAH with

4.That because the JAH are stationary within the JAH
Field, the Michelson-Morley experiment does not apply
as a method of determining the JAH Field existence.
Nor does the operator the square root of one minus v
squared divided by c square apply to the JAH Field.

5. That the General Theory of Relativity applies to the
physics of the the groups of JAH(matter) within the Field

but not to the JAH Field.

6. That Quantum Mechanics and Relativity can be married
in this theory once the non-relative parts are excluded.

7. That the bending of light photons in a magnetic field is
caused by the local inability of JAH to resonate groups of
matter through the Field and not because there is a guiding
warp of space-time.

8. That the alleged missing matter is not dark matter but
is the Zero Point creations of hydrogen or virtual positive

particles that remain in the field.

9. That there is only one true particle which is combined into
groups (matter) by threes and all others are fragments
which cease to resonate as a group. Depending on the
up-down, cw-ccw rotation, the quarks are formed at the
forced disassociation of the three true particles, as well
as all other fragments, ie.. glueons, Z, graviton, etc. and
cease to resonate as a group in the JAH Field.

10. In the beginning there was a naked singularity of the
JAH Field. Through Zero Point Vacuum Energy activity,
hydrogen is formed throughout the universe and
collected into gravity formed star masses, which,
formed the galaxies. As the universe expanded, new
galaxies filled the voids creating a perpetually changing
but static universe.

This theory presents The Perfect Cube which creates absolute physics
constants to within four significant figures.

which is far beyond the ability of the Cern accelerator.

for your assistance in the resolution of this matter.