Doughnut-shaped holes of killer proteins observed for the first time

Spanish and German researchers have successfully seen for the first time the pores, shaped like rings and crescent moons, that the Bax protein perforates in mitochondrial membranes. This advance has been achieved thanks to super-resolution microscopy and may help find the “holy grail” of cell suicide, a crucial process in preventing cancer. 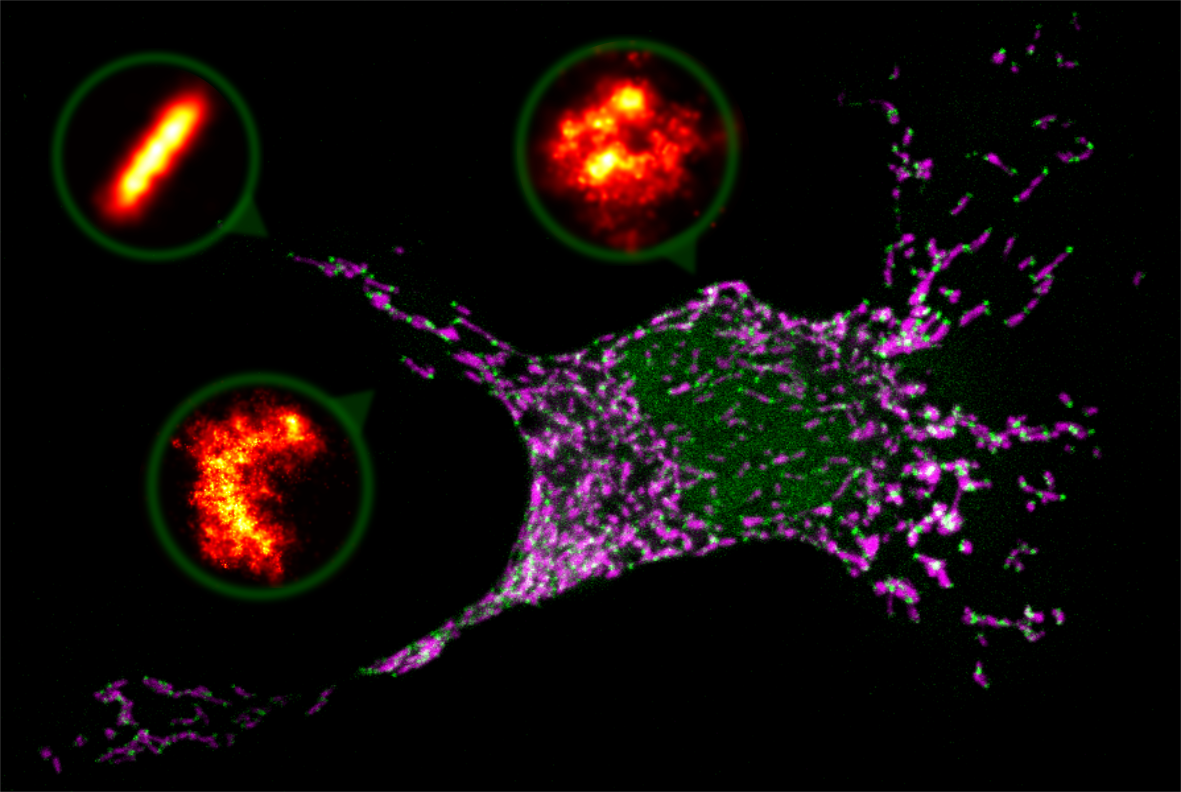 Confocal microscopy image showing a mammalian cell entering apoptosis or cell suicide. Mitochondria are shown in magenta and Bax protein in green, organising in the areas where the mitochondria are fragmenting. The zooms show Bax structures (in orange) shaped like rings, arcs and lines, captured by super-resolution microscopy. / Credit: R. Salvador-Gallego

Death is essential for life, at least at the cellular level. Organ development relies to a large extent on there being a perfect balance between cells that are growing and dividing and those that are dying. In order for this to occur, cells programme their own destruction through a process called apoptosis, or cell suicide. If any fault arises in this programmed death, cells proliferate in an uncontrolled manner, and cancer can be caused.

The complex mechanism of apoptosis is governed by a family of proteins, Bcl-2 proteins, which form a large network of molecular interactions to regulate the permeabilisation of the outer membrane of the mitochondria, the powerhouse of the cell. This step is considered to be the point of no return in cell suicide, and is mediated in the last instance by the Bax protein, an essential member of the Bcl-2 family whose function is to perforate the membrane.

When the cell is stressed by apoptotic stimuli, Bax activates its killer instinct, encrusting on the mitochondrial membrane and recruiting other Bax units to form large clusters. Finally, these break the mitochondrial outer membrane by making a hole or pore, which allows the release of proteins such as cytochrome c from the intermembrane space into the extracellular environment to culminate the suicide process. 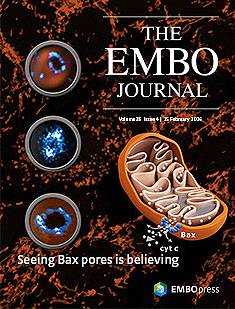 Cover of The EMBO Journal. / EMBO

“The mechanism that the Bax protein follows to irreversibly damage the cell is still unknown; in fact, the existence of these pores has not until now been free of polemic, as nobody had succeeded in observing them in the mitochondria of cells,” the Spanish biochemist Raquel Salvador-Gallego, a researcher at the University of Tübingen (Germany) and co-author of the paper, explained to SINC.

But seeing is believing. This biochemist and colleagues at her university and several other German research centres have managed to visualise the nanometric structures behind Bax organisation during apoptosis, with the help of super-resolution microscopes. The paper is the cover article of this week’s edition of 'The EMBO Journal’.

“Surprisingly, we have been able to observe very defined Bax structures across the mitochondria, shaped like rings, arcs and lines. These are typical of the protein in its active form and are only present when the cell is dying,” Salvador-Gallego stresses.

The team, coordinated by another Spanish researcher, Ana García-Sáez, has verified that these ring and arc structures are able to perforate artificial membranes which mimic the lipid composition of mitochondria. This leaves no doubt that they are closely linked to the function of the Bax protein during apoptosis.

The biochemist summarises that this paper “proposes a new mechanism of Bax action and confirms the existence of these pores, giving us an important piece in solving the puzzle of apoptosis.”

Another article appears in the same journal, a study led by Stefan Jakobs of the University Medical Center of Göttingen (Germany), which confirms with complementary super-resolution techniques the existence of Bax rings which may potentially also link with Bak proteins, another member of the Bcl-2 family.

“How the two killer proteins Bax and Bak form the putative ‘apoptotic pore' that is responsible for irrevocably damaging mitochondria leading to cell death is considered the ‘holy grail’ of apoptosis research,” writes Dr Grant Dewson of the University of Melbourne (Australia), also in ‘The EMBO Journal’. He concludes: “These two studies provide tantalising evidence of ring and crescent moon-shaped ‘apoptotic pores.” 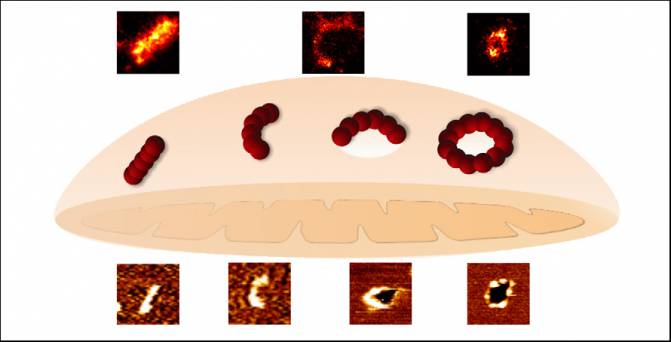 The super-resolution images show that Bax proteins (in lines, arcs and rings) mediate in the permeabilisation of the mitochondrial outer membrane during apoptosis. / Credit: The Embo Journal/ R. Salvador-Gallego et al.