For the first time, an international team of scientists lead by researchers from the Campus de Excelencia Internacional Moncloa (UCM-UPM) has shown that the amygdala in the human brain is able to detect possible threats in the visual environment at ultra-fast time scales. By measuring the electrical activity in the amygdala of patients that had been implanted with electrodes in order to better diagnose their epilepsy, the researchers provide new data on how information travels between the visual and emotional networks. 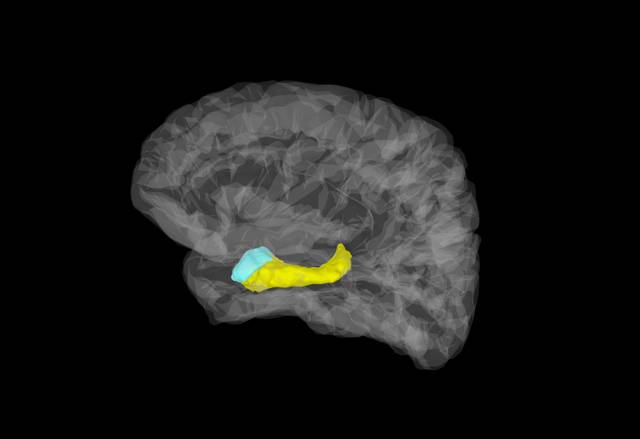 The amygdala is a brain structure that is part of the limbic system and has a key role when it comes to emotional processing. As opposed to the neocortex, the external part of the brain that covers both hemispheres and hosts most higher cognitive functions in human, such as visual processing or language , the amygdala sits in the internal, or subcortical, part of the brain.

“The amygdala has a privileged spot in the brain, being one of the best connected structures. It sends and receives projections from brain areas at different levels and at the same time is capable of indirectly unleashing physiological changes and autonomic nervous system responses.”, explains Constantino Méndez-Bértolo, researcher from the Campus de Excelencia Internacional Moncloa of the Universidad Complutense and the Universidad Politécnica de Madrid. However, its location deep inside the brain makes it a difficult structure to study with common neuroimaging techniques.

In order to better diagnose clinical conditions such as epilepsy, neurosurgeons may implant electrodes in the amygdala. In a study published in Nature Neuroscience, researchers relied on the collaboration of eleven patients undergoing such clinical evaluation by Dr. Antonio Gil-Nagel at the Hospital Ruber Internacional (Madrid) with electrodes implanted in this brain area.

The analysis of amygdala activity from these patients allowed the researchers to gather the first direct evidence in humans that this area by itself is able to extract information about biologically relevant stimuli in the visual scene very rapidly, before receiving more precise visual input from the neocortex.

In order to arrive at this conclusion, the scientists performed two experiments. In the first one, patients had to indicate, by pressing one of two buttons, if the pictures they were being shown (facial expressions of fear, happiness and neutral) pertained to a man or a woman.

In addition to emotion, the experimenters also manipulated the spatial frequency of the faces. The authors showed normal photographs (comprising all the frequency bands) mixed with pictures of faces composed of only either low or high spatial frequency components. Low frequency pictures appear like blurry photos – one can distinguish if the eyes or the mouth is open or shut, but cannot appreciate the details – while high frequency pictures have sharp edges and facial features appear highlighted.

The low-road and the high-road

There are two pathways through which visual information is thought to travel to affective neural circuits. One goes straight from the thalamus to the amygdala. This “low-road” is composed of neurons of the magnocellullar class through which only low spatial frequency components are transmitted. The other pathway flows from the thalamus to the occipital cortex, where traditional visual processing begins. This “high-road” is composed by magno- as well as parvocellullar neurons, where both high and low spatial frequencies are carried.

The authors observed that the amygdala can work with just the coarse visual information within a picture if this picture conveys biologically-relevant information of threat, in this case the expression of fear in another person.

“We started from the hypothesis that, if the amygdala would show a rapid emotional response, this would be larger for the negative emotions and it may occur as long as low spatial frequency components are present in the visual input, as information would arrive from the pulvinar nucleus of the thalamus to the amygdala via magnocellullar axons, which do not carry high frequency spatial information.”, points out Méndez-Bértolo, one of the main authors.

By recording intracranial from the amygdala the researchers were able to detect a very fast electrical response – before 100ms – to the low frequency components of fearful face stimuli. This was followed by responses – considerably later – in both amygdala and visual cortex to pictures with high or low spatial frequency components.

In a second experiment, patients viewed neutral and extremely unpleasant complex visual pictures and indicated whether the picture pertained to an indoor or outdoor scene. The results, compared with the previous experiment where only faces were being shown, indicated that such a fast emotional response was not present for more complex visual stimuli.

This new insight into how information travels between the visual system and emotional networks may help towards a better understanding of pathologies with elevated feelings of fear, such as in phobias and anxiety, where the amygdala is thought to play a fundamental role.

“Our work highlights the importance of ultra-rapid brain responses to threat-related visual stimuli. The responses in the amygdala are so fast that they could reflect an automatic or unconscious visual process, which might explain why fear can sometimes feel out of our voluntary control”, according to Dr. Bryan Strange, from the Laboratory for Clinical Neuroscience of the UPM, which led the research with participation from the Basic Psychology I department of the UCM, in collaboration with the University of London (UK), the University of Geneva (Switzerland) and the Reina Sofia Centre for Alzheimer's Research (Madrid).