Almost half of the 36 species of felids that live in the wild in the world are at threat, according to the International Union for Conservation of Nature. Yet the lack of studies regarding their main threat, the loss and fragmentation of their habitat, limits the establishment of effective conservation strategies. These are the findings of a study which has only been able to find 162 scientific articles regarding this threat which clearly endangers the Iberian lynx. 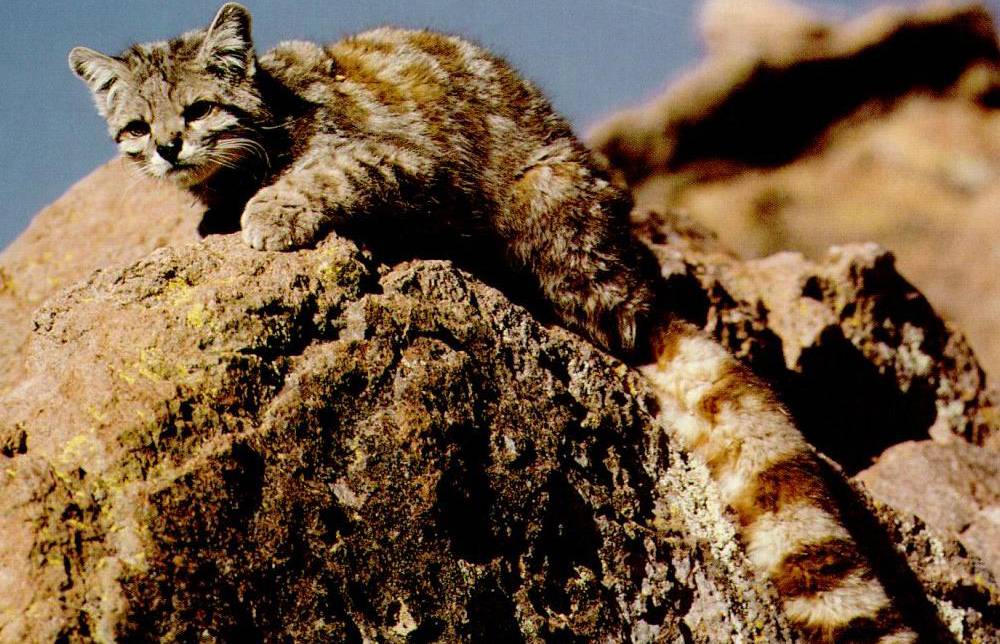 The Andean mountain cat (Leopardus jacobita) is one of the most endangered felids in the world. / Wikipedia

Despite conservation efforts, news on how Iberian lynx (Lynx pardinus) are hit by vehicles on Spanish roads has been reported. The status of the most endangered felid in the world is hardly improved by the continual ‘incursions’ into its territory. Ever-shrinking and broken-up habitats affect the future of the lynx.

"Without proper scientific knowledge it is hard to set up effective conservation strategies,” declares Francisco Palomares

To assess the situation of the Iberian lynx and other felid species that live in the wild on our planet, a team of Brazilian and Spanish scientists has reviewed the scientific literature that exists on the main threat for these mammals: the loss and fragmentation of their habitats. The results have been published in the scientific journal Oryx.

Although many scientific studies are produced (last January, for example, 60,000 scientific articles were published), researchers could only find a total of 162 studies which evaluated threats affecting felids.

“These figures clearly indicate that in general there is a lack of knowledge on this topic, which especially affects felid conservation. Without proper scientific knowledge it is hard to set up effective conservation strategies,” declares Francisco Palomares, one of the authors of the study and researcher for the department of Conservation Biology at the Doñana Biological Station (CSIC), to SINC.

According to the new study, the main reasons for the limited information on the effect of habitat loss and fragmentation for felid conservation are “the lack of both financing for research and communication between managers and researchers,” highlights Palomares.

North America and Europe generate the greatest amount of research on the effect of habitat loss on felids. However, in view of the lack of research in certain countries with less economic resources, the real effect of this threat is still unknown for 16 species of felids. This is the case for the Andean mountain cat (Leopardus jacobita), the Bornean bay cat (Pardofelis badia), the flat-headed cat (Prionailurus planiceps), and the fishing cat (Prionailurus viverrinus), in danger of extinction and for whom there are very few studies and conservation measures. 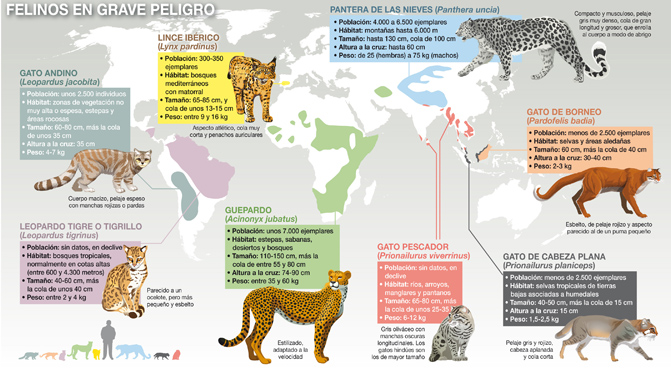 Distribution of some of the most endangered felids in the world and those on which there is least research, information and conservation measures, except in the case of the Iberian lynx. / José Antonio Peñas-SINC

Conservation of the Iberian lynx, an exemplary model

Among those on which there is little scientific information is the Iberian lynx, the most threatened felid, and which is considered critically endangered according to the Red List of Threatened Species of the International Union for Conservation of Nature.

“However, in accordance with our review of scientific literature, it is a model species and exemplary in evaluating the effect of habitat loss and fragmentation,” the researcher points out, who adds that there is scientific data to help to develop successful conservation plans for the species.

As the Iberian lynx lives in the Mediterranean scrubland, its habitat needs protecting. “As well as suitable vegetation, there must be significant rabbit populations,” adds Palomares.

The team of researchers highlights the need to tackle at least the following three areas of research for the rest of the felids: differentiating habitat loss from the effects of fragmentation using theoretical scenarios; selecting priority areas for conservation, and analysing the consequences of habitat loss.

“Felid conservationists must start to design more theoretical projects and apply the new tools and methodologies available in research on landscape and wildlife,” concludes the study.