Heating can damage the artistic heritage of churches

The antiquated heating systems in many Spanish churches create abrupt variations in temperature and humidity which can negatively affect the conservation of its artistic heritage, especially in tall ceiling areas. Also, as the heat rises, it takes time for the parishioners below to feel comfortable after the heating systems are turned on. These are the findings of an analysis conducted on a church in Madrid by researchers from the Institute of Geosciences (UCM-CSIC). 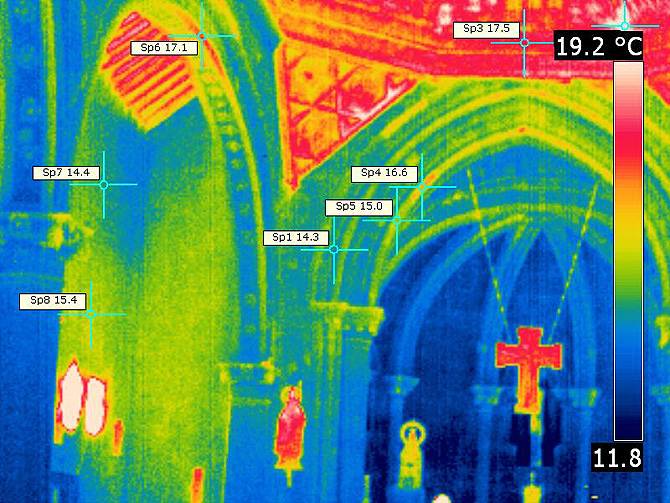 Infrared thermographic image while the heating is on in the church in Talamanca del Jarama. The highest temperatures affect the wood of the coffered ceilings and the damaged areas of sculpted stone, as well as the images of the saints and the cross. / Institute of Geosciences (UCM-CSIC).

During the second half of the 20th century many Spanish churches installed heating systems blowing out hot air which ran on heating oil. Members of the Institute of Geosciences (UCM-CSIC) have now verified that their habitual and continual use destabilises the indoor climate of these buildings, negatively affecting the conservation of their heritage.

“When heating is turned on and off frequently it creates strong environmental fluctuations, which translate into a significant rise in temperatures (double that at the start) and a dangerous drop in relative humidity (below 20%) in the tall ceiling areas of the church,” explains the researcher María José Varas-Muriel, lead author of the work.

“This influences the physical properties of wood, stone, plastering and mural paintings, potentially causing the appearance of cracks, blisters or salt marks which can cause dangerous damage,” warns the scientist. “And under these conditions, the artistic heritage of the higher areas (where there may be coffered ceilings, sculpted vaults, paintings and even sculptures) can be jeopardised”.

To carry out the study, published in the journals ‘Energy and Buildings’ and ‘Building and Environment’, the researchers have focused on a parish church model: that of San Juan Bautista in Talamanca del Jarama (Madrid). It has been declared a historic-artistic monument and is made up of different architectural styles, including Romanesque.

The microclimate has been recorded with various wireless monitoring systems, including the use of balloons to elevate the sensors, together with infrared thermography, hygrometry and electrical resistivity devices to measure the two critical parameters for conservation: temperature and humidity.

Parishioners do not immediately feel warm

The measurements have also confirmed that the heating equipment does not improve the temperature sensation for those few who usually attend these buildings on a daily basis. While they are seated during the religious service they do not notice a pleasant atmosphere until the heating has been on for a long period of time.

In tall ceiling areas the temperature increases more, and the humidity drops to dangerous levels for the heritage pieces.

Only in special ecclesiastical celebrations, like some events at Easter, do the churches usually fill up and on these occasions the actual body heat of the crowds moderates the atmosphere, although this is not usual throughout the year. In the church at Talamanca, with the heating on and full of people, the temperatures have been seen to reach 15-17 ºC at the seating level, while they do not rise above 13 ºC if there are few parishioners.

In 2012 a piece of European legislation appeared with recommendations for placing heating in churches, chapels and other places of worship, “but their adaptation to Spain is still pending,” Varas-Muriel recognises.

Meanwhile, researchers recommend replacing the old heating systems with other newer and more efficient ones, although this solution is still being studied and is not within reach of many parishes for economic reasons.

“In that case and evaluating each system, certain modifications would have to be introduced that reduce the harmful effects on their interior heritage, such as placing the vents in suitable places and close to the floor, as well as solve potential internal problems of damp on the walls and above all, control the time and intensity of the heating used,” concludes the expert.