How much sun is good for our health?

Spanish researchers have estimated the duration of solar radiation exposure required in order to obtain the recommended doses of vitamin D. While in spring and summer 10 to 20 minutes in the sun are enough, in the winter months almost two hours would be needed, therefore for the vast majority of the population it is difficult to achieve the optimal values. 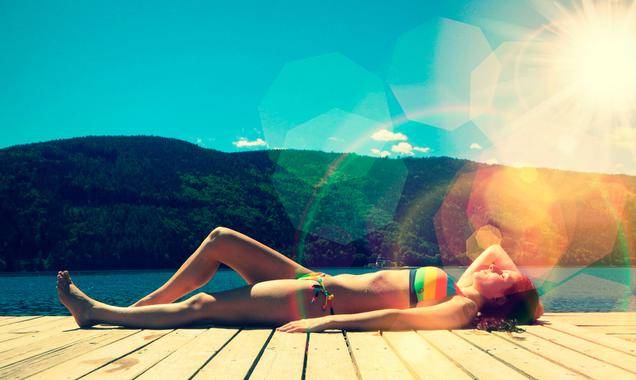 Every year, studies on the benefits of sunbathing in moderate doses are interspersed with those that confirm the risks of doing it excessively.

Although ultraviolet (UV) solar radiation contributes to the development of sun erythema, cancer and aging of the skin, it also reduces blood pressure, synthesises vitamin D and improves the treatment of several diseases.

Now, the Solar Radiation Research Group at the Polytechnic University of Valencia (UPV) has analysed the exposure time needed to obtain the recommended doses of vitamin D without damaging our health. The results have been published in the journal ‘Science of the Total Environment’.

As María Antonia Serrano, a scientist at the UPV and main author of the study, explains to SINC: “In Spain, despite being a country with many hours of sunlight, several articles have reported a high percentage of vitamin D deficiency among various strata of the Spanish population.”

Vitamin D deficiency is linked in adults to a higher risk of suffering from various diseases. Since very few foods contain this vitamin, its synthesis in the skin as a result of sun exposure is the main natural source that exists.

Serrano and her colleagues estimated the time needed to obtain the recommended doses – which is equivalent to a daily intake of 1,000 IUs (international units) of vitamin D – in an area such as the city of Valencia, which receives a large dose of UV radiation throughout the year.

The study analysed ultraviolet solar irradiance (UVER) around midday (between 12:30 and 13:30) for four months of the year (one in each season) from 2003 to 2010. With these figures the time taken to cause erythema – reddening of the skin caused by burns – was calculated.

As such, the facts show that in July, an individual with skin type III (the most common one among the population of Spain) must not spend more than 29 minutes in the sun if they wish to avoid erythema. However, in January, the same individual can remain in the sun for 150 minutes.

The minimum exposure time to obtain the recommended daily dose of vitamin D was obtained in the same way. “The problem can appear in winter due to low levels of UV radiation and because people cover most of their bodies,” the expert adds.

It was found that around midday in January, with 10% of the body exposed, around 130 minutes are needed to obtain the recommended daily dose of vitamin D.

It was found that around midday in January, with 10% of the body exposed, around 130 minutes are needed to obtain the recommended daily dose of vitamin D

As this time is shorter than the time taken to get erythema, there is no risk of sunburn. By contrast, in April and July, with 25% of the body exposed, around 10 minutes is sufficient to acquire the vitamin. And in October, for example, 30 minutes would be enough.

“These calculations were made for skin type III, but the figures would change for those who are lighter or darker in complexion,” Serrano points out. “It is also essential to bear in mind that we have considered the usual percentage of the body exposed for the season. If more skin is exposed, exposure time can be reduced.”

Similarly, the time obtained for erythema to occur was calculated for average days. “It should be taken with caution. On extreme days, permissible exposure times would be much shorter,” she stresses.

The results show that, although there is sufficient radiation in countries like Spain, it is difficult to attain recommended doses of vitamin D in winter (from November to February) at a northern mid-latitude, since the exposure time required is excessive (130 minutes).

In these months, with 10% of the body exposed, at solar noon two hours of sun exposure would be needed to obtain an optimal dose of vitamin D; but at 10:00 approximately 9.7 hours would be required and at 16:00 around 5.7 hours.

On the other hand, in the middle hours of the day in spring and summer, with 25% of the body exposed, around 10 minutes of sun exposure at about 13:00 and 20 minutes from 15:00 to 17:00 would be sufficient to meet daily vitamin D requirements.

“Radiation received also depends on posture, body shape and clothing. It should also be remembered that not all areas of the body synthesise vitamin D with the same efficiency,” Serrano reveals.

An individual’s age also plays an important role in synthesising vitamin D from UV radiation, because the older one gets the less able one becomes to produce vitamin D: middle-aged adults have 66% of the potential children have to do this.

“These results can help to adopt the right measures to make up for any deficiency, such as informing the medical profession about the utility of increasing vitamin D intake in the diet or through supplements,” the Spanish researcher concludes.