Dinosaur footprints found in several European countries, very similar to others in Morocco, suggest that they could have been dispersed between the two continents by land masses separated by a shallow sea more than 145 million years ago. 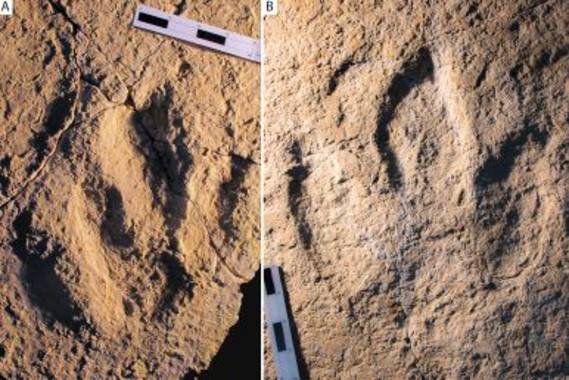 At the end of the Jurassic, as a consequence of the defragmentation of the Pangaea subcontinent, the countries that now form Europe were part of an archipelago surrounded by a shallow sea. In its interior, the Iberian Peninsula was located in the southernmost part, on the continent of Laurasia (which included present-day North America and Eurasia), but near Gondwana, the continent to the south.

Large predators strolled through these lands and their footprints have been found on different continents. Thus, for example, ichnites and bones of allosaurs and stegosaurs have been found in both North America and Portugal, suggesting that both territories were connected in some way.

In a new study, published in the Journal of African Earth Sciences, a team of European scientists, with Spanish participation, has now recognized two types of dinosaur footprints related to large Jurassic predators in today's Switzerland, Portugal, Spain (which belonged to Laurasia) and Morocco (which was in Gondwana).

The marks, called Megalosauripus transjuranicus and Jurabrontes curtedulensis, belonged to carnivorous theropods similar to Tyrannosaurus rex. “On the one hand, we have identified a type of large and slender footprints with a size of 30-50 cm and, on the other hand, other gigantic and robust footprints measuring more than 50 cm,” as Diego Castanera, from the Miquel Crusafont Catalan Institute of Palaeontology (ICP) of the Autonomous University of Barcelona and co-author of the work, has explained to SINC.

In order to distinguish the types of footprints, the team used a novel software called DigTrace, which made it possible to virtually compare the fossilized footprints. “We can't determine with certainty what animal left a particular footstep since different related dinosaurs could leave very similar footprints,” says Castanera.

How did the dinosaurs pass between Laurasia and Gondwana? The answer is problematic because there was a deep sea between the two continents

However, this study confirms that the differences between the two groups of footprints identified are important enough for their originators to be different but closely related dinosaurs.

Scientists thus suggest that they probably belonged to Allosaurus and Torvosaurus, since their remains have been found in the Upper Jurassic of Portugal, indicating the presence of two super-predators in the terrestrial ecosystems of the late Jurassic.

To confirm these data, the group of researchers stresses that more studies are needed, especially to answer an important question: how did the dinosaurs pass between Laurasia and Gondwana? “The answer is problematic because geological studies indicate that there was a deep sea between the two continents,” stresses the scientist.

The presence of the same species in such distant places forces scientists to propose dispersal routes between continents during the Mesozoic, the time during which dinosaurs lived. These large animals were thus able to move between Africa and Europe on land masses with short emersion periods and through southern Italy and the Balkans or through Iberia (what is nowadays the Iberian Peninsula).