Microbubbles and ultrasound open the blood–brain barrier to administer drugs

The impassable blood–brain barrier prevents microorganisms from entering our brain, however it also blocks medicines that could help treat Parkinson’s, Alzheimer’s and other neurodegenerative diseases. Now, a Spanish physicist and other researchers at the University of Columbia (USA) have succeeded in embedding these substances in tiny lipid bubbles, in such a way that ultrasound can be used to release them into the specific area of the brain where they are needed. 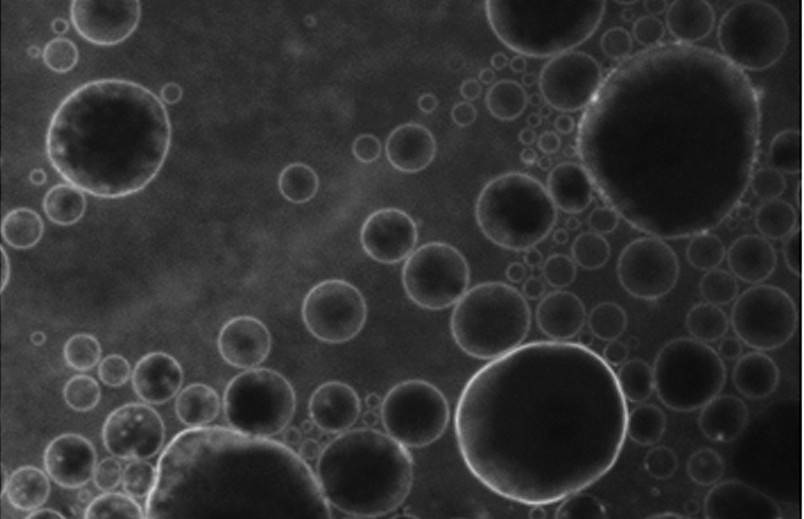 Microbubbles with the fluorescent substance in their lipid coating, from which the effect of the ultrasound causes them to be released into the desired area of the brain. / UEIL, C. Sierra et al.

A defence mechanism as sophisticated as the blood–brain barrier, which protects our brains from viruses, bacteria and fungi that filter into our blood, can become our worst enemy when it comes to treating certain illnesses. This “wall” is an impassable obstacle for 98% of drugs, which it treats as pathogens and blocks from passing from patients’ bloodstream into their brain.

Scientists have for years been trying to break through this natural barrier, but almost none of the techniques developed to date (such as intracranial injections, gene therapy and the chemical modification of the medicine) have been able to transport the drug to where it is needed, without it affecting the rest of the body and with the action being reversible (where the barrier opens and closes very rapidly).

The only method that has been capable of overcoming all these conditions is based on the use of ultrasound (sound whose frequency is higher than the range of human hearing) after drugs are administered with an independent intravenous injection of lipid-coated gas microbubbles (which are completely innocuous).

Like a laser, the ultrasound is focused on a specific region of the brain, where the microbubbles begin to oscillate and increase in size due to their interaction with the acoustic waves. When these tiny bubbles reach the critical size of 8 microns, the blood–brain barrier near to them opens, allowing the medicine circulating in the blood to pass through.

The fluorescent substance adhered to the microbubbles is released when they rupture due to the effect of the ultrasound, revealing the area of the mouse's brain where the blood–brain barrier is opened. / UEIL-C-Sierra et al.

This technique has been used successfully for over ten years, but it does have a disadvantage: the drugs move through the entire circulatory system and reach organs where they are not needed, causing adverse effects. However, it appears that scientists at the Ultrasound Elasticity Imaging Laboratory (UEIL) at New York’s Columbia University have found the solution.

“We’ve made a step forward by incorporating the substance we’re interested in into the lipid coating of the microbubbles. This makes the substance stay adhered to the microbubbles and prevents it circulating freely through the body,” SINC was told by the physicist Carlos Sierra, a UEIL researcher who receives a grant from A Coruña’s Berrié Foundation and the lead author of the paper on this new advance, published in the ‘Journal of Cerebral Blood Flow and Metabolism’.

With this technique, the microbubbles flow through the entire body with the potential drug adhered to them, but only release it in the area of the brain where it is required, where the effect of the ultrasound causes them to rupture and open the blood–brain barrier. “It does all this, while being non-invasive, reversible and completely safe,” Sierra stresses.

From experiments on mice to human trials

So far, the researchers have proven the efficacy of their technique on mice. They chose a fluorescent molecule called 5-dodecanoylaminofluorescein and confirmed that it was reaching the brain without affecting other parts of the animal. At the same time, they identified the acoustic pressure thresholds from which the substance is guaranteed to reach its target in vivo.

“Defining these parameters means we can think about how to transfer the technique to human patients, although it has to be tested on monkeys first,” the researcher explains, adding that “it could be applied to diseases like Parkinson’s, Alzheimer’s, Huntington’s diseases, brain tumours, strokes, multiple sclerosis and amyotrophic lateral sclerosis, where we expect to see a very significant rise in the efficacy of treatment and a considerable reduction in side-effects.”

The team has now started administering potentially therapeutic compounds for treating Parkinson’s disease “with promising initial findings,” Sierra points out, concluding that “the success of this technique in mice, and even in monkeys, can’t guarantee it will be effective in people, but if we continue to get satisfactory results then pre-clinical trials on humans would begin."