Neanderthals manipulated the bodies of adults and children shortly after death

Neanderthals from the French region of Poitou-Charentes cut, beat and fractured the bones of their recently deceased companions, as revealed by the fossil remains of two adults and a child found at the Marillac site. These manipulations have been observed at other Neanderthal sites, but scientists still do not know whether they did this for food or ceremony. 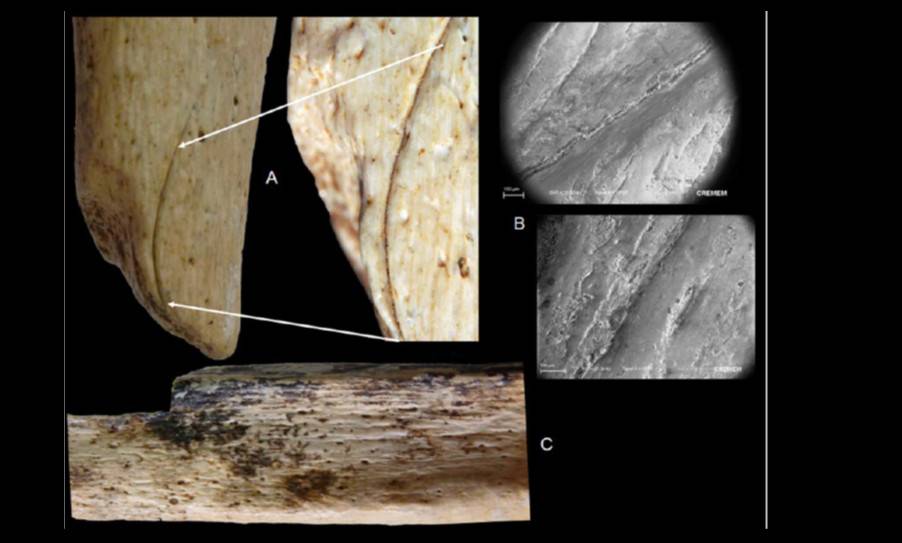 Since the Marillac site in France was unearthed, the discovery of fossil remains of animals (90% belonging to reindeer), humans and Mousterian tools has enabled the site to be identified as a hunting area for Neanderthals (Homo neanderthalensis). But the most surprising thing about the site is the presence of a large quantity of bone remains of these hominids, many of which are yet to be analysed.

Now, a study published in the ‘American Journal of Physical Anthropology’ has for the first time analysed the fragments of three individuals found between 1967 and 1980 at the French site dating back some 57,600 years. These are an incomplete diaphysis (middle part of long bones) of a right radius, another of a left fibula and the majority of a right femur. The latter belonged to a child.

When compared to the remains of other Neanderthals and modern humans, the scientists confirm not only the strength and rounded form of Neanderthal bones, but they also identify on the three bones manipulations made very shortly after the individuals’ death.

As María Dolores Garralda, professor at the Complutense University of Madrid, a researcher at the University of Bordeaux in France and the main author of the study, explains to SINC: “Some Neanderthal groups cut and tore apart child or adult corpses shortly after death (perimortem) using lytic instruments.”

The femur fragment, which appears to be from a child who died at the age of 9 or 10, shows two large cut marks half a centimetre apart. From its state of preservation, the researchers suggest that the bone was fractured when still fresh with the aim of separating the upper and lower extreme of the femur, where the joints are located. 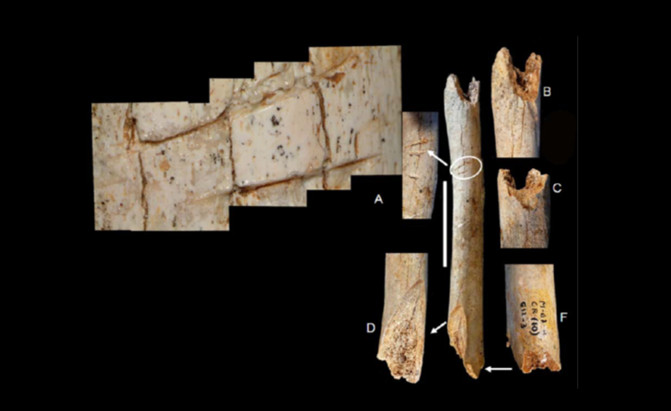 "The right leg received a series of blows that fractured the femur, and the cut marks identified are anthropic in nature," Garralda notes

“The upper edge exhibits marks of a “post-mortem” impact with conchoidal markings (those that does not follow natural separation positions),” the study sets out. The lower region possesses a clear, oblique spiral break which seems to have occurred while the bone was fresh.

“Given the morphology of the fractures, it may be that the body of this child was manipulated shortly after death. The right leg received a series of blows that fractured the femur, and the cut marks identified are anthropic in nature; in other words, there is no visible evidence of animal bites,” Garralda notes.

The bones of the two adults show these and other markings. The fragment of the radius, possibly belonging to a man, also has small, fine cut marks made with flint tools shortly after death. “The most significant are three striations together crossing over each other while the bone was still fresh,” the study describes. 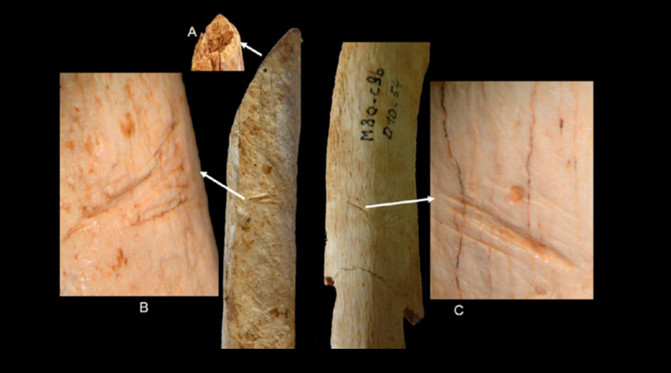 Neanderthals made cuts with flint tools on this radius. / M.D. Garralda et al

As for the fibula, although the fresh fractures of both extremes can be seen, there are also signs of percussion at the lower end. But “there is no evidence of cuts or traces of carnivores’ teeth,” the researcher insists. Unlike to the other two fragments of bones analysed, the fibula fossil exhibits numerous manganese stains; manganese is a very abundant mineral in the cave which gives bones a black colour.

The expert remains cautious regarding the hypothesis of cannibalism, due to the large number of animal bones found on the site

The team of scientists does not know why they did this: “They might have been rituals – still in the 21st century these continue in certain parts of the world – or for food – gastronomic cannibalism or due to need,” asserts the expert, who remains cautious regarding the hypothesis of cannibalism, due to the large number of animal bones found on the site which could have been Neanderthals’ food.

In addition to these perimortem corporal manipulations carried out by members of the group, other bones found at the Marillac site, also fragmented, exhibit signs of gnawing or digestion by animals. “These markings and deformations are clearly distinguishable from those studied in the three Neanderthal diaphysis,” the expert concludes.