Whenever required to define the colours of an image, one usually falls back on a system of eleven well-known names, such as white, red, green and blue, but a team of Chinese and European scientists propose using an additional 28 terms, such as burgundy, salmon, lavender, plum, tan and olive green These new descriptors offer better results when it comes to classifying images, identifying people and visually monitoring individuals.

Black, blue, brown, gray, green, orange, pink, purple, red, white and yellow -these are the eleven basic colours that make up one of the most popular classifications of colour names - especially in the Anglo-Saxon world -, commonly used to describe the tonality of an image. The determination of colours is applied, in turn, in the field of artificial vision in many areas, such as the recognition and tracking of people.

Now, however, researchers from the Computer Vision Centre (CVC) of the Autonomous University of Barcelona and other international institutions present a new system in the magazine Machine Vision and Applications, wherein 28 complementary colours are added to the basic ones. Altogether, according to the authors, they give a much better description of the various colour shades.

The system has been trained with a database of 250 images extracted from Google for each of the 39 colours (11 + 28), applying statistical models to estimate probability values. In this way, an algorithm has learned to automatically and accurately differentiate each colour; and the new classification has been successfully applied in different experiments.

"These descriptors surpass those already existing in tasks such as the visual tracking of people, the re-identification of previously recorded individuals and in the classification of images," stresses Lu Yu, CVC researcher and co-author of the work.

Specifically, the new colour system has proven its effectiveness in identifying pixels and creating masks in photographs of cars, shoes, dresses and ceramic pieces. Also for describing the shades of flower collections included in a database with more than 8,000 images.

The new descriptors also offer better results to track the faces and shapes of people with cameras, even when the lighting conditions are not good, the frames are low-resolution or there are blurs and occlusions due to the movement of the subject. 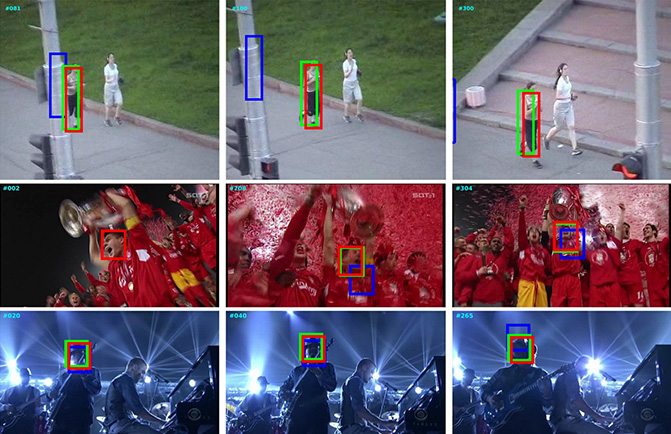 In the event of the goal being the re-identification of a person whose data have already been filed in a database, it has been confirmed that a system with more colours better describes the tones of elements such as clothing. Thus, for example, individuals who, due to the red colour of their shirts, look the same with a system of 11 colours will be shown to be dressed in different colours when the different shades of red are well distinguished.

Finally, the researchers also conducted a psychophysical experiment with volunteers, who had to decide if the colour and name they saw on a computer screen matched. Their answers also confirmed that, for the purpose of better describing the colours, they preferred the system of 11 + 28 names instead of just the 11 basic ones.

Although the study has not gone into these details, Yu also points out that there are subtle differences in the appreciation of colours depending on the gender of the observer: "We don’t know if, due to social or biological issues, women seem to distinguish colour tones more easily than men." The variety of nail polishes is a good example of this.

"And I’ve also perceived cultural differences,” adds the expert, “when designating some colours, such as pink, which for Europeans is closer to fuchsia, whereas for the Chinese, it is closer to rose" Future research could yield deeper insights into the influence of gender and culture on the classification of colours.