Osteoporosis is a serious health issue that mainly affects postmenopausal women. Now, a Spanish study has confirmed that doing exercise during puberty can improve bone health in adulthood. In this scope, sports such as football, handball and basketball are better than others such as swimming. 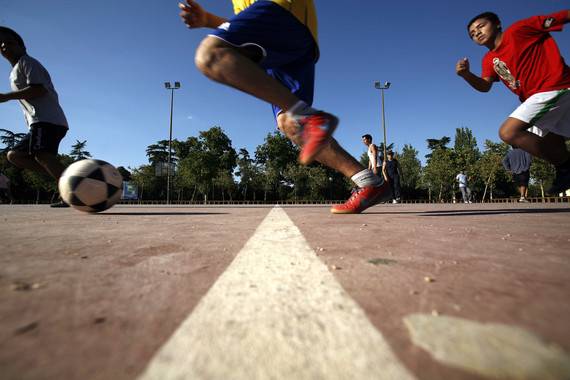 One of the ways of optimising bone health and, therefore, of reducing the risk of suffering from this disease is through physical activity. / Sinc

For years, osteoporosis has been referred to as the silent killer. It is characterised by a decrease in bone mass and an increase in the fragility of bones and the risk of fractures. It has been called the silent killer owing to its asymptomatic nature and the possibility of going undetected for many years.

One of the ways of optimising bone health and, therefore, of reducing the risk of suffering from this disease is through physical activity. As such, researchers at the University of Castilla-La Mancha have led a study that assesses the influence that different sports have on bone health during puberty.

“With this study we wish to find out which sport discipline promotes the greatest bone acquisition in developing girls,” Esther Ubago Guisado, the lead author of this study which was recently published in the ‘Journal of Sports Sciences’, explains to SINC

Researchers of the Management of Sports Organisations and Facilities (IGOID) research group at La Mancha institution analysed 200 Spanish girls between 9 and 13 years of age. The girls were divided into five groups in accordance with the type of sport that they practiced (swimming, football, basketball, handball and a control group – no extracurricular exercise).

Two types of tests were performed: a Tanner test to assess their stage of sexual development and a bone density test to determine their body composition (bone mass, fat mass and muscle mass).

To analyse the data, the participants were divided into the following groups: prepubescent girls (before puberty) and pubescent girls (during puberty). Furthermore, they were compared with regard to the four sports (swimming, football, basketball and handball) and with regard to practising extracurricular sport or not (control group).

Sports with a high osteogenic effect are better

In relation to physical activity practised in Spanish schools, the authors maintain that only 2 hours a week is not enough to assist in the acquisition of bone mass at an early age.

Furthermore, practising a sport with a high osteogenic effect (football, basketball or handball) at an early age guarantees greater accumulation of bone mass in comparison with low osteogenic effect sports (swimming), since the latter are carried out in an environment of weightlessness where bones experience a lower mechanical load.

“The results reveal that sport type is a variable that can have an influence on bone health in girls during childhood. These data may be useful as a method for preventing bone diseases in adulthood,” Ubago concludes.

In order to avoid social and financial repercussions, in 2014 the International Osteoporosis Foundation proposed prevention as the best method for combating this disease.

In Spain, approximately two million women suffer from osteoporosis, with a prevalence of 25% in the postmenopausal population. It is believed that this disease causes around 25,000 fractures each year.

Although this disease can affect anyone, according to data from the Spanish Society of Rheumatology approximately 1 in 3 women and 1 in 5 men over 50 years of age will suffer from an osteoporotic fracture at some point during the remainder of their lifetime.

The fractures most commonly caused by osteoporosis are located in the vertebrae and hips. Hip fractures usually occur at a later stage than vertebral fractures, at around 70 years of age.