Popular science helps to discover the abundance of this jellyfish

When the Rhizostoma luteum jellyfish was discovered at the beginning of the 19th century in the waters of the Strait of Gibraltar, only nine specimens were identified. For years, it was so inconspicuous that later, in the 20th century, it failed to turn up for six decades. A team of scientists, with the help of a citizen initiative, has now confirmed that it is not really as difficult to find as previously believed. 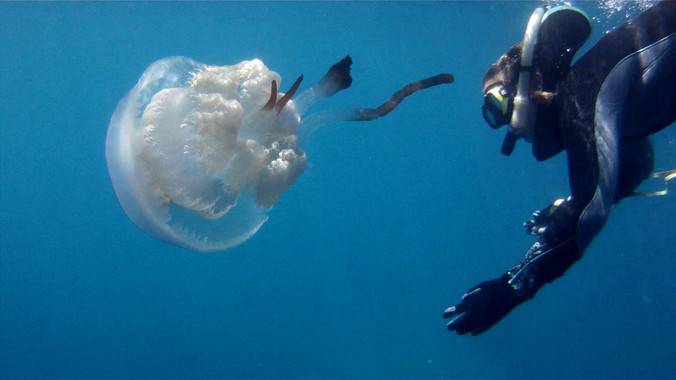 In 1827 the French naturalists Jean René Constant Quoy and Joseph Paul Gaimard, while aboard the Astrolabe on a trip around the worlkd, discovered a new jellyfish species in the Strait of Gibraltar. Describing the Rhizostoma luteum (formerly called the Orythialutea) was made possible thanks to the analysis of nine specimens. This was the first and last time it was seen.

“We believe that every time it was seen, it was mistakenly identified with such other jellyfish”, Laura Prieto says

During the following decades, this jellyfish went unnoticed and there were no scientific records of it over the last 60 years. It was not until 2013 when a team of scientists, led by Laura Prieto of the Institute of Marine Sciences of Andalusia (CSIC), confirmed the presence of this species in Mediterranean waters by means of a phylogenetic analysis.

“We believe that every time it was seen, it was mistakenly identified with such other jellyfish as the Rhizostoma pulmo, the Rhizostoma octopus and the Catostylus tagi,” as Prieto, the co-author of another study that corroborates that this jellyfish is actually more abundant than what was thought, has pointed out to Sinc.

The new work, part of the future doctoral thesis by Karen Kienberger and recently published in the Marine Biodiversity journal, has made several historical and recent records of the Rhizostoma luteum since 1998, thanks to the observations of scientists and a citizen initiative.

The results confirm more than 150 observations in the last 17 years, “which shows that it is not such a rare species after all,” the authors emphasize.

“With this work, we did research work to see if what we thought was an unusual species was really one that had been ill-identified for many years,” explains Prieto. The R. luteum is frequent in the coastal waters of the west and south coasts of the Iberian peninsula and the west and north coasts of Africa.

This jellyfish is actually more abundant than what was thought. / Darius Enayati

Similar to the others

The jellyfish can reach a diameter of more than 60 cm with some specimens; the oral arms end differently and sometimes - but not always - they are very long, and can reach more than two metres.

To detect the jellyfish, the researchers were helped by citizens who sent historical accounts, photographs and videos

“Its geographical distribution is very wide: from Portugal to South Africa in the Atlantic and in the Alboran Sea in the Mediterranean. With subsequent studies, we’ve been able to verify that the mother carries her protected offspring in her gonads until she releases them in an appropriate environment,” the researcher reports.

In order to detect the jellyfish, Laura Prieto and Karen Kienberger were helped by citizens who sent historical accounts, photographs and videos taken in the North-East Atlantic Ocean and the Alboran Sea. “Posters were distributed in diving and marine clubs and a lot of non-scientific outreach literature, such as books on diving or marine fauna, was subjected to revision,” says Prieto.

The scientists contacted many authors of the photos, and explored open social networks and open access databases on jellyfish that included photos. “Any citizen could (and can) send an email with the place, the date and the photo of a sighting,” the authors stress.

For the researchers, this type of work makes it possible to monitor biodiversity and the manner in which species respond to climate change in marine ecosystems.