Complex organic molecules such as formamide, from which sugars, amino acids and even nucleic acids essential for life can be made, already appear in the regions where stars similar to our Sun are born. Astrophysicists from Spain and other countries have detected this biomolecule in five protostellar clouds and propose that it forms on tiny dust grains. 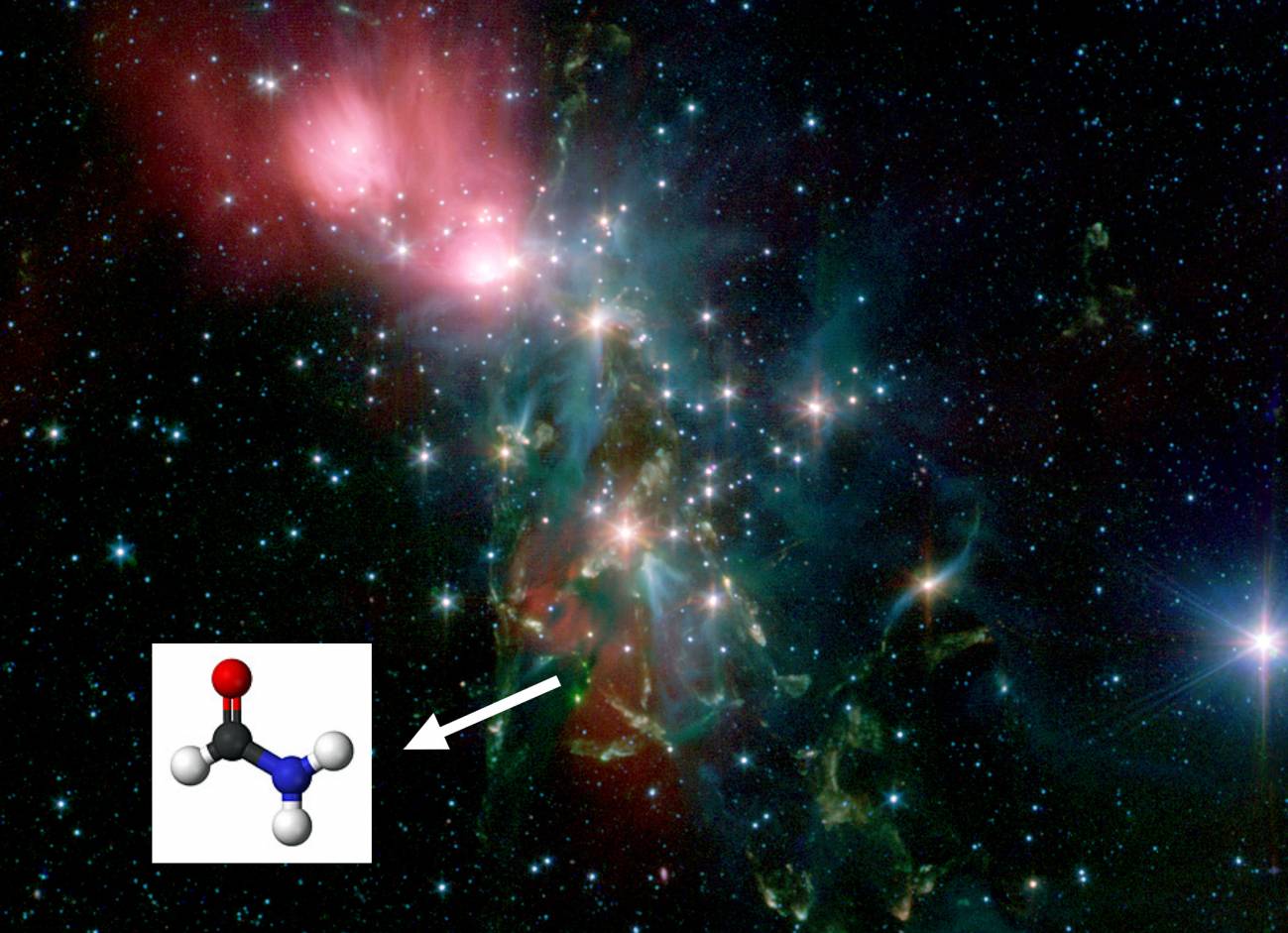 One of science’s greatest challenges is learning about the origin of life and its precursor molecules. Formamide (NH2CHO) is an excellent candidate for helping to search for answers as it contains four essential elements (nitrogen, hydrogen, carbon and oxygen), and can synthesise amino acids, carbohydrates, nucleic acids and other key compounds for living organisms.

However, this molecule is also abundant in space, mainly in molecular clouds or the concentrations of gas and dust where stars are born. This has been confirmed by an international team of researchers, including Spanish investigators, after searching for formamide in ten star-forming regions.

“We have detected formamide in five protosuns, which proves that this molecule (in all probability also true for our Solar System) is relatively abundant in molecular clouds and is formed in the very early stages of evolution towards a star and its planets,” explains Ana López Sepulcre, lead author of the study and researcher at the University of Tokyo (Japan), to SINC.

The other five objects where formamide has not been detected are less evolved and colder, “which indicates that a minimum temperature is needed for it to be detected in the gas,” adds the scientist.

The study, which has just been published in the ‘Monthly Notices of the Royal Astronomical Society’, also offers clues on how formamide could be created in interstellar conditions. “We propose that it is formed on the surface of the dust grains of the molecular clouds from isocyanic acid (HNCO), by a process of hydrogenation or addition of hydrogen atoms,” says López Sepulcre.

“Formamide formed in this way remains attached to the dust grain until the temperature is high enough (in other words, until the protostar evolves) to cause its sublimation,” she argues. “And that is when we can detect it with radio telescopes”.

The researchers have achieved this thanks to a telescope measuring 30 m in diameter at the Institut de Radioastronomie Millimétrique (IRAM), located in the Sierra Nevada, as part of the framework of the international project Astrochemical Surveys At IRAM (ASAI). Its principal investigators are Bertrand Lefloch from the Institut de Planétologie et d'Astrophysique de Grenoble (CNRS, France) and Rafael Bachiller from the Observatorio Astronómico Nacional (IGN, Spain).

Yet formamide is not the only potentially prebiotic organic molecule analysed in space. Just this month the detection of methyl cyanide (CH3CN) around the young star MWC 480, already in a protoplanetary stage, has been published in the journal ‘Nature’.

“This other study demonstrates that complex molecules survive until the later stages of stellar formation, and even continue forming afterwards,” López Sepulcre notes, but formamide does have some advantages: “It contains oxygen (another essential element for life) and is a strong candidate as a precursor of prebiotic material, as not only amino acids can be formed from it (which could also be synthesised from CH3CN), but also nucleic acids and bases, or rather genetic material”.

“This proves the significance of our study,” emphasises the researcher, who sums it up as: “formamide, a significant biomolecule, is already formed in regions where stars like our Sun are born in the very early stages and in relatively high amounts”.