One of the great attractions of the island of Santorini, in Greece, lies in its spectacular volcanic landscape, which also contains places similar to those of Mars. A team of European and U.S. scientists has discovered it after analysing basaltic rocks collected in one of its coves. 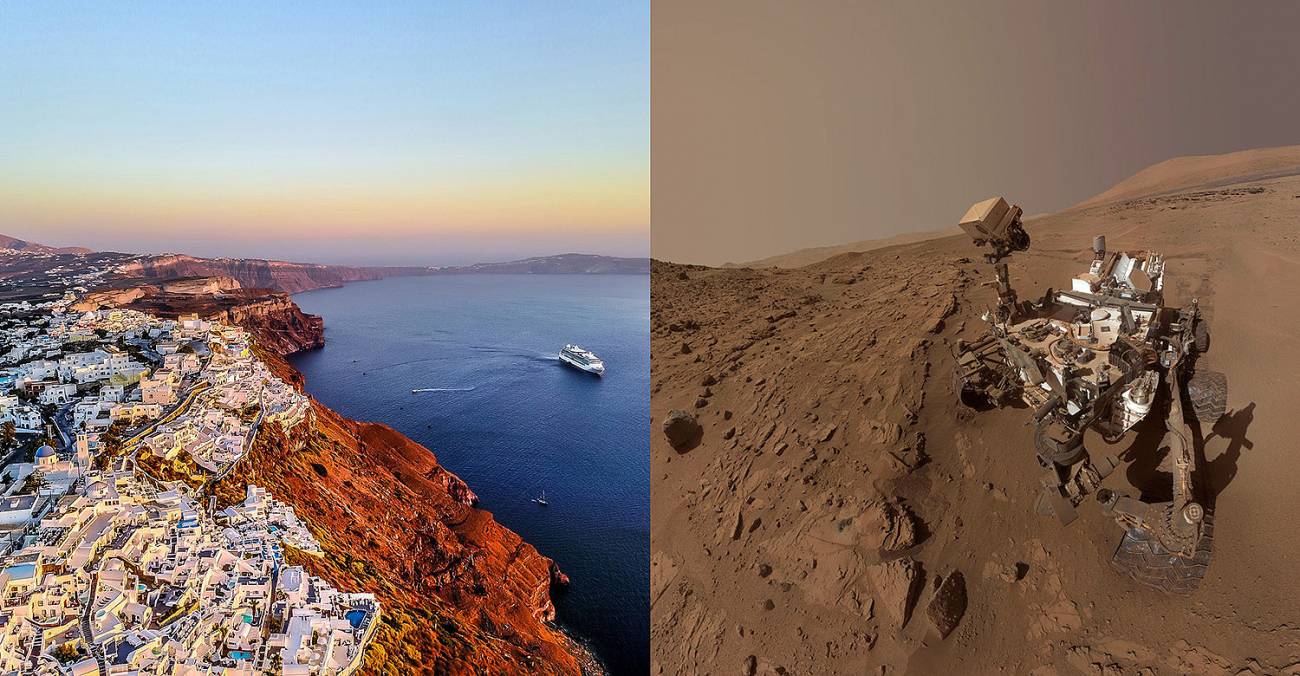 On the island of Santorini, basaltic rocks similar to those located by the Curiosity rover in the crater Gale de Marte have been found. / Nextvoyage-Pixabay/NASA/JPL-Caltech/MSSS

The Greek island of Santorini is now one of the most popular tourist destinations in the Mediterranean, but 3,600 years ago it suffered one of the largest volcanic eruptions recorded in history. Among the material that has been exposed, scientists have now found rocks similar to those of Mars.

“In the Balos Cove –located to the south of the island - we have discovered basalts such as those that have been identified by the rovers on Mars and with properties similar to those of certain meteorites from the red planet and those of terrestrial rocks classified as Martian analogues,” points out Ioannis Baziotis, a researcher at the Agricultural University of Athens and co-author of the study, recently published in Icarus journal.

More specifically, the authors have confirmed that this basaltic material is equivalent to that located by the Spirit and Curiosity rovers in the Gusev and Gale craters of the red planet, and that its chemical and mineralogical composition resembles that of genuinely Martian meteorites (olivine-phyric shergottites) and similar Martian samples included in The International Space Analogue Rockstore (ISAR), a collection of terrestrial rocks used to test and calibrate instruments that will fly on space missions.

“The basalts of this cove and other, similar ones that we have also found in two areas northeast of Santorini are quite abundant,” explains Baziotis, "so they can serve as an accessible and low-cost resource for experiments, instead of using the rare and expensive olivine-phyric shergottites collected on Earth or material laboriously prepared from synthetic mixes”.

“Optical microscopy and geochemical analyses show that the basalts of Balos Cove are viable analogues for characterising geological processes and chemical and mineralogical properties of materials present on the Martian surface,” says another author, Anezina Solomonidou, a researcher at the European Space Astronomy Centre (ESAC) run by the European Space Agency (ESA) near Madrid.

“In addition –she adds–, this area of the island is easily accessible and offers excellent logistics for sampling, testing and calibration instruments, field training and other activities related to current and future Mars exploration.”

Along with its tourist relevance, Santorini has thus become an excellent destination for comparative planet studies, a field which, according to Solomonidou, “plays an important role both in characterising geologically distant exotic worlds, such as planets and moons, and in better understanding our own planet.”

Beside researchers from Agricultural University of Athens and ESA, this study has involved scientists from NASA, California Institute of Technology (Caltech) and various Greek institutions, in addition to the collaboration of the Spanish geologist Jesús Martínez Frías to improve the scientific content of the paper. 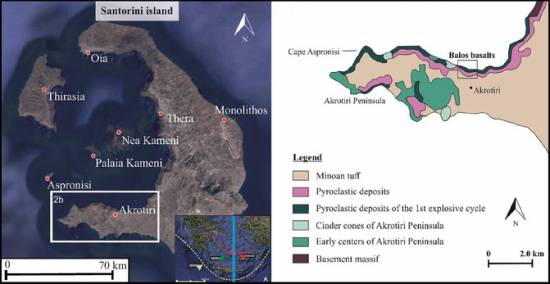 Complex of the volcano of Santorini. The white rectangle indicates the region of the peninsula of Acrotiri. Right: simplified geological map of the part of the island where the Balos cove sampling area is located (black) / Google Earth/Pantazidis et al.