Astronomy and astrophysics
The discovery is published today in 'Nature'

Spanish scientists have discovered the first binary system ever known to consist of a black hole and a ‘spinning’ star – or more accurately, a Be-type star. Although predicted by theory, none had previously been found. The observations that led to the discovery were performed with the Liverpool and Mercator telescopes at the Observatorio del Roque de los Muchachos (Canary Islands, Spain). 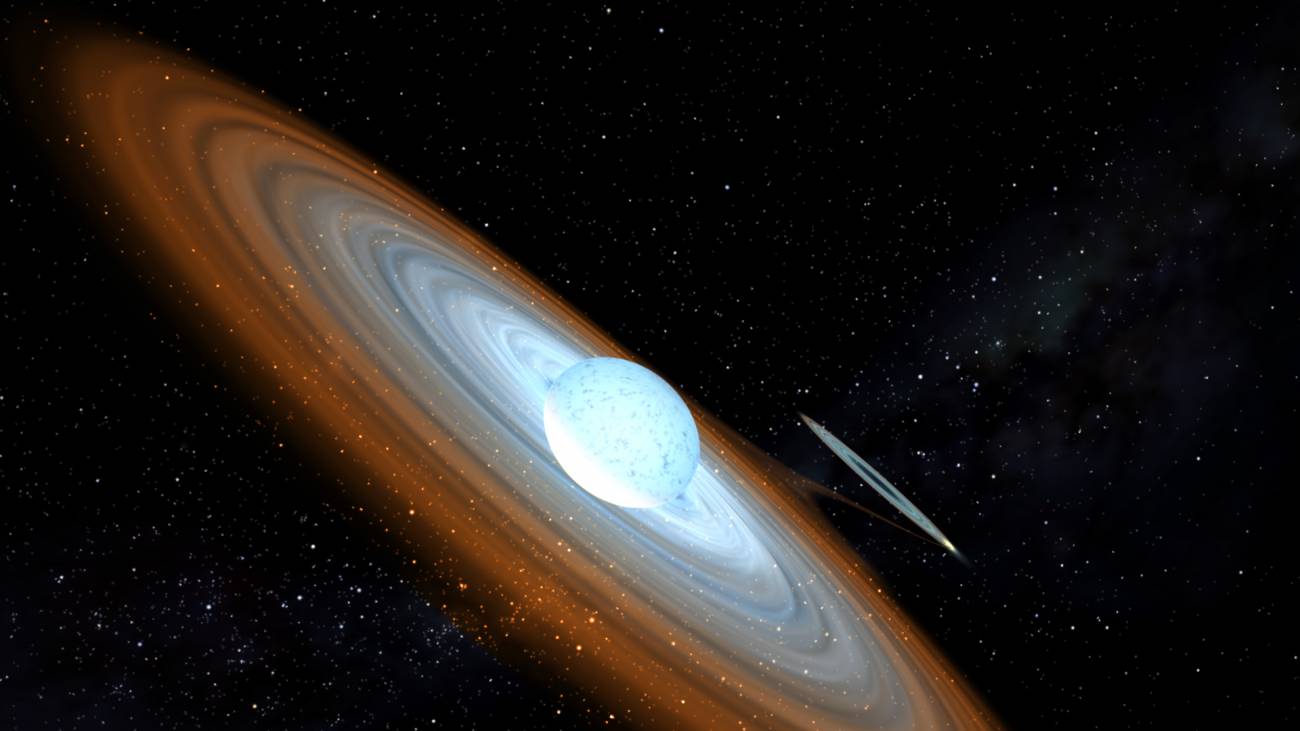 The Be star spins at extremely high velocidad, ejecting matter through an equatorial disc. Part of this matter falls on to the black hole forming an accretion disc. / Gabriel Pérez - SMM (IAC)

Be-type stars are quite common across the Universe. In our Galaxy alone more than 80 of them are known in binary systems together with neutron stars. ‘Their distinctive property is their strong centrifugal force: they rotate very fast, close to their break-up speed. It's like they were cosmic spinning tops,’says Jorge Casares of the Instituto de Astrofísica de Canarias (IAC) and La Laguna University (ULL). Casares is the lead author and an expert in stellar-mass black holes (he presented the first solid proof of their existence back in 1992).

The newly discovered black hole orbits the Be star known as MWC 656, located in the constellation Lacerta (the Lizard) - 8,500 light years from Earth. The Be star rotates so fast that its surface speed exceeds 1 million kilometres per hour. ‘We started studying this star back in 2010, when space telescopes detected transient gamma-ray emission coming from its direction,’ explains Marc Ribó, of the Institut de Ciències del Cosmos of Barcelona University (ICC/IEEC-UB). ‘No more gamma-ray emission has subsequently been detected, but we found that the star was part of a binary system,’ he adds.

A detailed analysis of its spectrum allowed scientists to infer the characteristics of its companion. ‘It turned out to be an object with a mass between 3.8 and 6.9 solar masses. An object like that, invisible to telescopes and with such large mass, can only be a black hole, because no neutron star with more than three solar masses can exist,’ states Ignasi Ribas, of CSIC in the Instituto de Ciencias del Espacio (IEEC-CSIC).

The black hole orbits the (more massive) Be star and is fed by matter ejected from the latter. ‘The high rotation speed of the Be star causes matter to be ejected into an equatorial disc. This matter is attracted by the black hole and falls on to it, forming another disc - called an “accretion disc”’. By studying the emission from the accretion disc we could analyse the motion of the black hole and measure its mass,’ comments Ignacio Negueruela, a lecturer at the University of Alicante (UA).

Scientists believe this object to be a nearby member of a hidden population of Be stars paired with black holes. ‘We think these systems are much more common than previously thought, but they’re difficult to detect because their black holes are fed from gas ejected by the Be stars without producing much radiation, in a “silent” way, so to speak. However, we hope to detect other similar binary systems in the Milky Way and other nearby galaxies by using bigger telescopes, such as the Gran Telescopio Canarias,’ concludes Casares.

Also participating in the study with Jorge Casares, Ignacio Negueruela, Marc Ribó and Ignasi Ribas are Josep M. Paredes , of Institut de Ciències del Cosmos of Barcelona University (ICC/IECC-UB) and Artemio Herrero and Sergio Simón, both from the IAC and ULL.

The detection of black holes has been a challenge since their existence was first surmised by John Michell and Pierre Laplace in the 18th century. Given that they are invisible - their enormous gravitational force prevents light from escaping – telescopes cannot detect them. However, black holes can occasionally trigger high energy radiation from the environment surrounding them and can thus be traced by X-ray satellites. This is the case with active black holes, fed by matter transferred from a nearby star. If violent X-ray emission is detected from a place where nothing but a normal star is seen, a black hole might be hiding there.

Using this method, researchers have discovered 55 potential black holes over the last 50 years. Seventeen of them have what astronomers call a ‘dynamic confirmation’: the feeding star has been localised, allowing for the mass of its invisible companion to be measured. If it is above three solar masses, then it is considered to be a black hole.

The biggest problem is put forth by ‘dormant’ black holes, such as the one found by the Spanish researchers: ‘Their X-ray emission is almost absent, and so it is very unlikely that our attention would be drawn to them,’ Casares explains. Researchers believe there are thousands of black hole binary systems across the Milky Way, some of them also with Be-type stellar companions.