On São Miguel Island in the Azores, there used to exist a small, nocturnal bird of prey, related to the European scops owl, named Otus frutuosoi, which was very probably driven to extinction with the arrival of the first settlers in the 15th century. An international study, in which Spanish researchers participated, has for the first time identified fossils of this species endemic to the island. 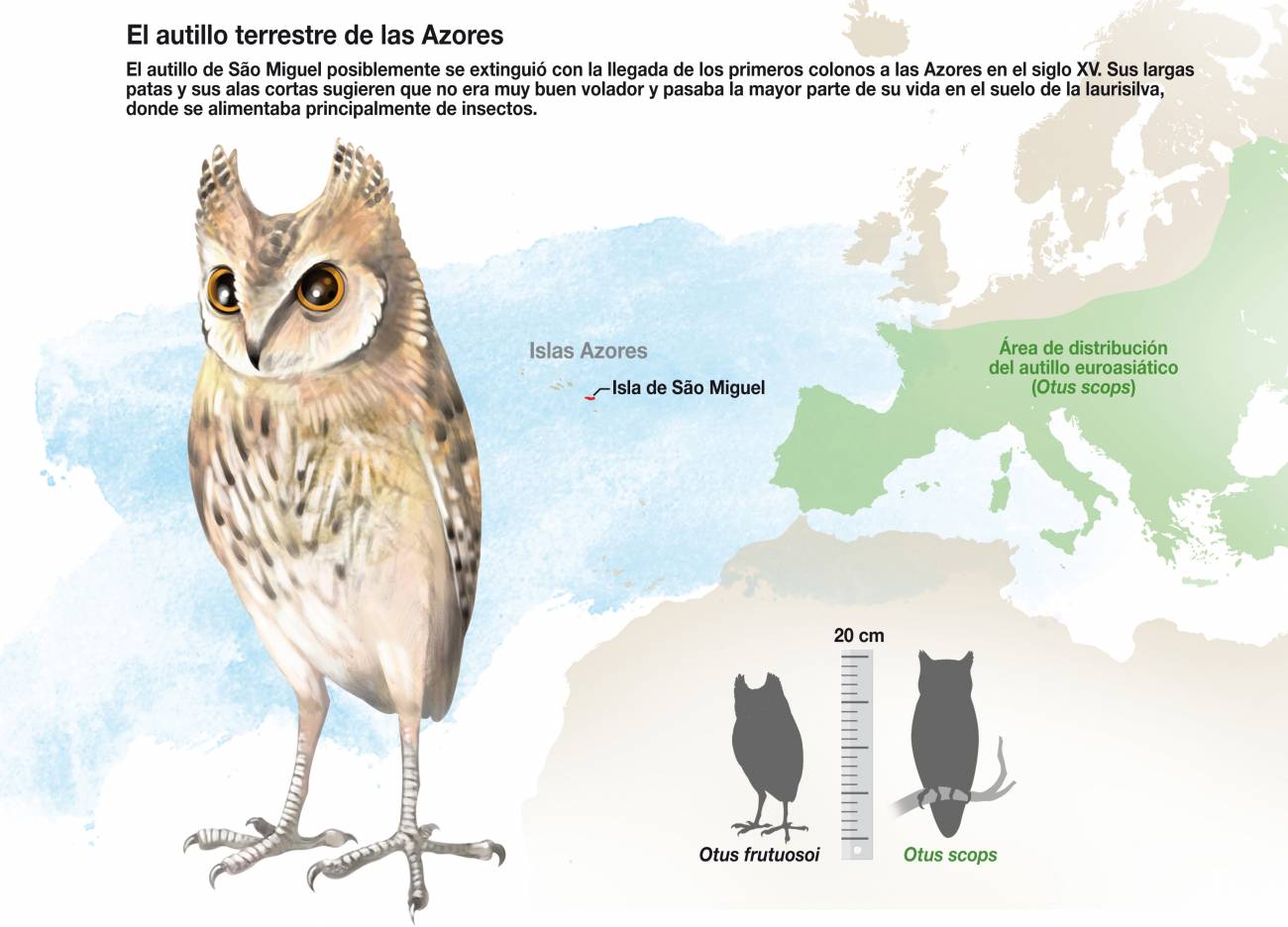 On 28 August 2011 researchers Juan Carlos Rando, from the University of La Laguna (Tenerife), and Josep Antoni Alcover from the Mediterranean Institute for Advanced Studies in Mallorca unearthed some small fossil bones buried not far below the ground of the Água de Pau cave (São Miguel Island, Azores, Portugal).

Two years later, an article published by the journal Zootaxa has revealed that the remains found belong to an extinct species of scops owl which has been given the name Otus frutuosoi in honour of the 16th-century Azorean historian Gaspar Frutuoso.

Carbon dating the fossils indicates that they are from 1,970 years ago. The hypothesis entertained by the researchers is that the arrival of human beings to the archipelago in the 15th century changed its ecosystem and caused the extinction of the species.

“Humans have a history of changing island ecosystems. When humans arrived on the island mice started to appear and laurisilva – a type of humid forest – was destroyed. This surely played a large part in the extinction of the São Miguel scops owl,” Alcover explains to SINC.

Scops owls are nocturnal birds of prey, and this new species in particular is phylogenetically related to the Otus scops, or European scops owl, which with a length of 20 cm is the smallest nocturnal bird of prey on the Iberian Peninsular.

It is calculated that the wing surface of the Otus frutuosoi measured a maximum of 114 cm2, at least 33% less than the European scops owl, and although its legs were 11.6% longer, “the appearance of its body was more squat,” according to the experts.

“The body of the extinct scops owl of the Azores was shorter and wider than that of its modern-day European relatives. Its beak was short and small, similar to that of the nightjar. Having long legs and very short wings, it must have been a very poor flyer and thus more of a land-dwelling bird,” the scientist points out.

A year ago, the same team of scientists documented another extinct bird of the same genus, although bigger, in Madeira: the Otus mauli.

Due to its anatomical features, the scientists believe that the Otus frutuosoi was an insectivore and must have lived on the ground of the laurisilva, where it would have found food and protection.

Otus frutuosoi remains have only been found on São Miguel Island in the Azores, therefore it is considered endemic to the island, although the authors do not discount the possibility of finding more fossils of the same species or other similar ones in various parts of the archipelago.

“The discovery of endemic scops owls in Azores and Madeira indicates that on occasions atmospheric conditions have occurred that have dragged these birds with them. Some reached safe land, where they survived and developed in isolated conditions, and new species formed,” concludes Alcover.