The last ‘caimans’ living in Spain

Sixteen million years ago, the reptile Diplocynodon ratelii lived in wooded ecosystems among the lakes and pools of what we know today as Catalonia (Spain). Fossils found at the Els Casots site in the Vallès-Penedès Basin confirm not only that these are the most recent remains of the genus in the Iberian Peninsula, but also that temperatures at the time were higher than today’s. 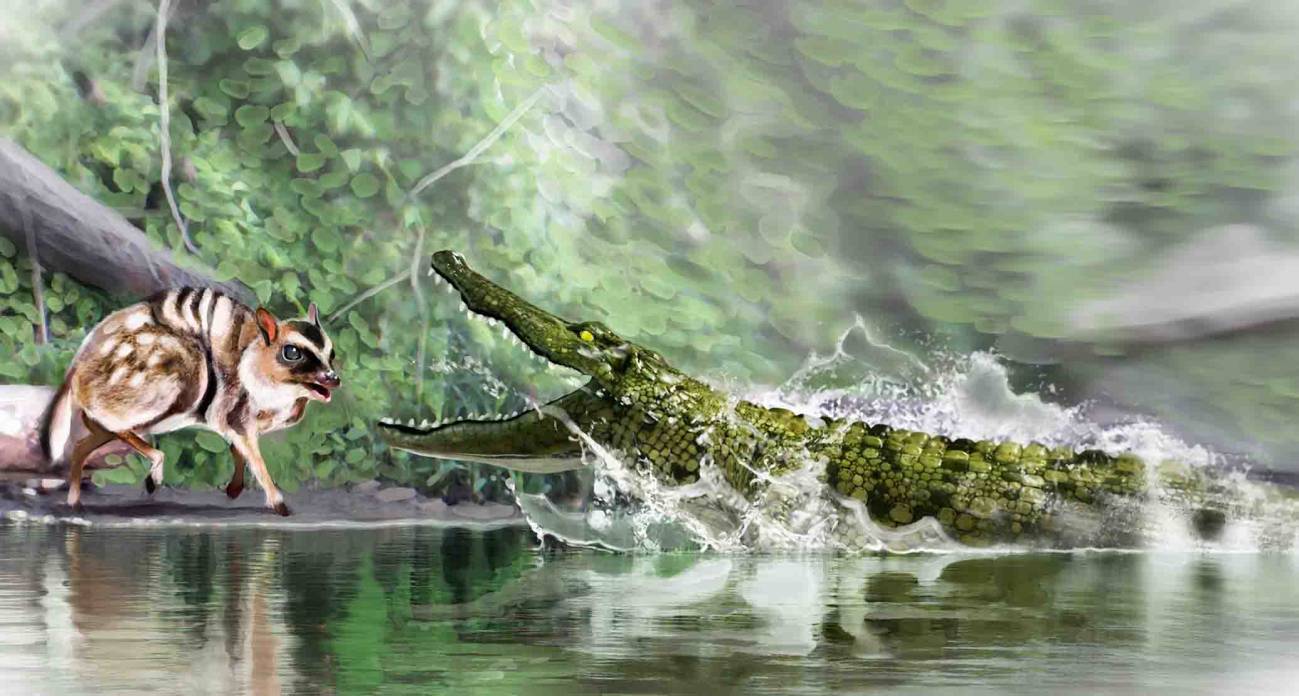 Diplocynodon ratelii, which is very similar in appearance to today’s caimans, stalked small prey, such as rodents and other extinct fish. / José Antonio Peñas (SINC)

A group of researchers working at the Els Casots site in the 1990s excavated the remains of a species of crocodile that was until then known only to have lived in southern France.

The study highlights the small size of the reptile, which measured no more than a metre long

Following several years in storage as they awaited analysis, the fossils have now been confirmed by new research published in the journal Comptes Rendus Palevol to be the first evidence of Diplocynodon ratelii in the Iberian Peninsula, where evidence had previously only been found for other species of this genus.

In addition to this, “these remains represent the latest published evidence of the genus in the Iberian Peninsula, as until now it had only been recorded much less recently, in the Eocene and Oligocene epochs, over 23 million years ago,” Sinc was told by the lead author of the paper, David Alba of the Catalan Institute of Paleontology Miquel Crusafont (ICP).

To reach these conclusions, the study provides the most detailed anatomical descriptions of the species given to date, highlighting the small size of the reptile, which measured no more than a metre long, according to craniums found at the site in Catalonia. Diplocynodon ratelii was a diplocynodon which would have originated prior to the divergence between caimans and alligators.

“The genus Diplocynodon was widely distributed across Europe for over 40 million years (from the Paleocene to the Miocene) and includes many species of small crocodiles similar in appearance to caimans and alligators (the family to which the species belongs, now extinct, is part of the alligatoroidea superfamily, alongside caimans and alligators),” said the researcher.

The study provides the most detailed anatomical descriptions of the species given to date, highlighting the small size of the reptile. / José Antonio Peñas (Sinc)

Fauna in Catalonia during the early Miocene

Today, alligatoroids are more common in the Americas and East Asia, but millions of years ago they were widespread in Eurasia. Diplocynodon ratelii, which is very similar in appearance to today’s caimans, stalked small prey, such as rodents and other extinct fish and reptile species that were present during the early Miocene. It also hunted larger mammals, such as mouse-deer (an artiodactyl).

According to remains found in recent years in Els Casots, these crocodiles would also have shared their habitat with large mammals: rhinoceroses, the equid genus Anchitherium, peccaries, mouse-deer, primitive pigs and bovines, extinct relatives of elephants (including the mastodon and a proto-elephant named deinotherium) and some carnivorous species, such as the so-called bear dogs and felids, hyaenids and extinct mustelids.

The presence of crocodiles in this area of the Iberian Peninsula can be explained by evidence from the analysis of other paleo-environmental remains from the site, from 16 million years ago, which indicate that there was once a lake there.

Given the abundance of fauna remains found in Els Casots, which is listed as an Cultural Asset of National Interest, the research group is very interested in reopening the excavations. Working in collaboration with the municipal government of Subirats, which owns the land, the scientists intend to recover additional fossil remains which may contribute to improving the available information on the fauna, paleo-environment and taphonomy of the site as a whole and on the taxonomy and paleo-biology of specific species.

“Reopening the site could also be linked to other actions to disseminate paleontology and paleontological heritage, although there still needs to be a discussion into how we would go about doing this,” concludes David Alba.