The microworm of Jaén whose males have no penis

In the most arid areas where there is little to no water, there live nematodes of no more than 1 mm which feed on bacteria and help to mineralise soil and produce nutrients. In an orchard of Jaén a new species has appeared with a feature that makes them unique on the Iberian Peninsula: the males lack the copulatory organ.

The southern part of the Iberian Peninsula, especially the southeastern tip, does not offer a very welcoming setting for these species. But despite the water deficit, nematodes, which are extremely small worms, known popularly as microworms, feed on bacteria they find in decomposing organic matter or on waste-strewn soil in order to survive.

As Joaquín Abolafia, a scientist at the University of Jaén’s department of Animal Biology, Vegetable Biology and Ecology, tells SINC: “These small animals serve as bioindicators of soil quality, as well as indicators of the presence of waste (especially faecal), of the existence of desertification processes and, ultimately, of climate change.”

While looking for bacteriophage nematodes – those that feed on bacteria – in arid areas south of the city of Jaén, the researcher discovered a new species of worm he named Myolaimus ibericus, as they were the first specimens of their group to be found on the Iberian Peninsula.

The finding in samples of compost taken from an orchard in the area known as Puente de la Sierra, a family farming area, is published in the journal Zootaxa. At this same place, the scientists recently found another new species of nematode known as Protorhabditis hortulana.

A nematode unique in the world

These microworms of between 0.5 and 0.8 mm in length belong to a very rare group of nematodes that is unique in the world, characterised by the fact that when moving their cuticle (equivalent to skin), nematodes do not detach from it but keep it. “This second skin protects them and could prevent them becoming dehydrated when soil becomes dry, thus making them more resistant to the summer months,” the expert says. 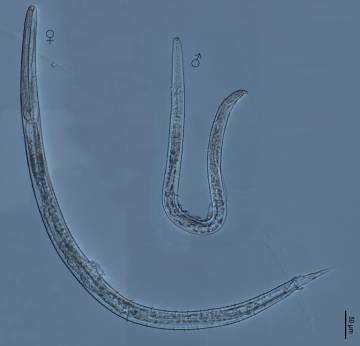 Another distinctive trait is that the males lack the copulatory organ, where normally nematodes have two accessory genital structures for penetration referred to as “spicules”, which are equivalent to the penis of other animals.

In this case, sperm transfer (copulation) occurs by the male pumping it into the female in a sack that appears on the genital orifice (or vulva) when the skin moves. “From here, the sperm, which is large and has pseudopods (extensions), enters the female’s genital tract and fertilises the ovules,” Abolafia explains. The eggs that develop are covered in small spines, “something else that is unusual among nematodes,” he stresses.

For the researchers, this is a globally significant finding in nematology. “It is a strange species with unusual biology, belonging to a very rare group of nematodes, and it is found in Jaén. This makes it unique on the Iberian Peninsula,” the scientist concludes.