Astronomy and astrophysics
Hundreds of webcams recorded the historic event

The mystery about the Chelyabinsk superbolide continues three years later

In 2013 February 15, the approach of asteroid (367943) Duende to our planet was being closely monitored by both the public and the scientific community worldwide when suddenly a superbolide entered the atmosphere above the region of Chelyabinsk in Russia. Three years and hundreds of published scientific studies later, we are still looking for the origin of such unexpected visitor, that caused damage to hundreds of buildings and injuries to nearly 1,500 people. Finding the precise value of its speed as it touched the top of the atmosphere appears to be the key to determine the orbit of the parent body of the Chelyabinsk superbolide. 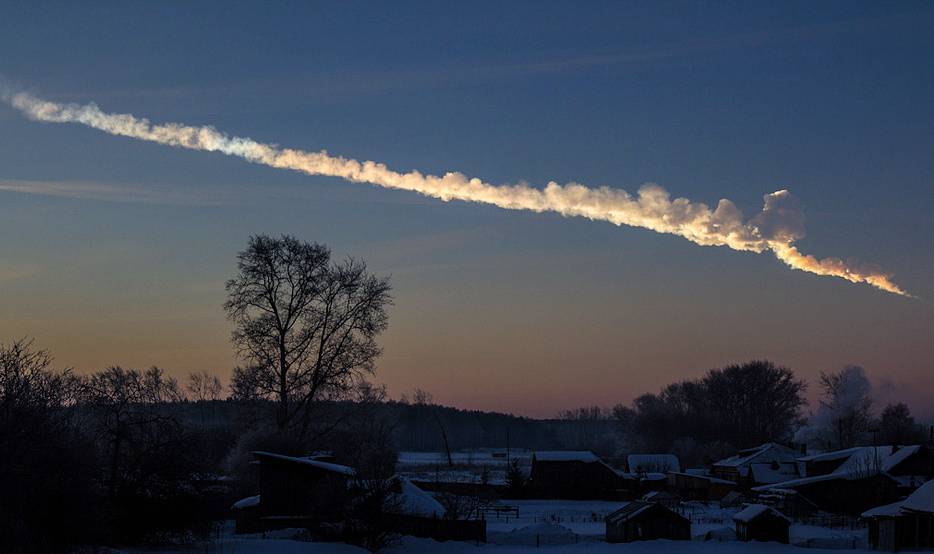 The Chelyabinsk superbolide flew over the Urals early on the morning of February 15, 2013. / Alex Alishevskikh

"Three years have passed since the Chelyabinsk (Russia) great scare and during this time more than two hundred research papers –50 in the last year— related directly or indirectly to the 19-m wide Chelyabinsk superbolide have been published in scientific peer-review journals", explains Carlos de la Fuente Marcos, co-author of one of these research works.

Among these studies, there is a catalog of 960 video recordings, published by the journal Astronomy & Astrophysics, that includes material automatically recorded by security cameras, traffic cameras, dashcams –very popular in Russia– installed on-board of all types of vehicles, and manual recordings made with the video cameras and webcams of the many accidental witnesses of the impressive phenomenon who shared their experiences on the internet.

The images and diverse scientific data compiled during the event have allowed the calculation of the atmospheric entry trajectory of the meteoroid, which turned into a meteor when it crossed Earth's atmosphere, exploding at a height of 20 km and releasing 500 kilotons or energy, approximately thirty times the yield of the Hiroshima nuclear bomb. The shockwave generated by such an explosion caused damage out to a distance of 75 miles breaking the windows, and even the window frames in some cases, of hundreds of buildings and injuring 1,491 people mainly due to cuts inflicted by shattered and broken glass. Approximately five tons of meteoritic material reached the ground, including the 650-kg meteorite that was recovered by divers from the bottom of Lake Chebarkul. 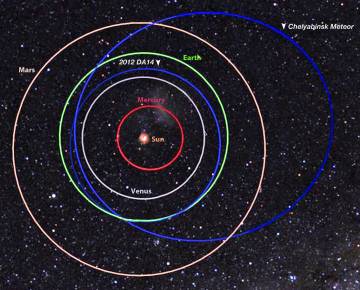 The Chelyabinsk superbolide entry took place the same day, 2013 February 15, the asteroid (367943) Duende approached the Earth. Duende (discovered originally from Spain) passed nearly 27,700 km above the Earth’s surface, well inside the boundaries of the ring of geosynchronous satellites but nearly perpendicular to it as expected, 16 hours after the Chelyabinsk superbolide explosion and the fall of the large meteorite on the Russian Lake Chebarkul.

At the beginning, it was thought that both events could be related and that the Chelyabinsk superbolide could have come from asteroid Duende itself or from a companion of this object, but when the orbits of both objects were analyzed and spectroscopic data of both asteroid Duende and the Chelyabinsk meteoritic material were studied in detail, the results obtained indicated that the two objects were completely independent and unrelated. It was a mere, albeit very unusual, coincidence in time of two spectacular cosmic events.

Where in space did the Chelyabinsk superbolide come from? "For a while, it was thought that asteroid (86039) 1999 NC43 was a good candidate for the parent body of the Chelyabinsk superbolide but after the publication of a detailed international study in the journal Icarus, it became clear that the Chelyabinsk impactor and the PHA 86039 (1999 NC43) were not part of the same object; from a dynamical and compositional point of view the relationship between both objects is too weak" explains de la Fuente Marcos.

During the last year, different orbital solutions for the asteroid that gave origin to the Chelyabinsk superbolide have been proposed; one of them has been computed by the Spanish astrodynamicists brothers Carlos and Raúl de la Fuente Marcos and Sverre J. Aarseth , scientist of the University of Cambridge (United Kingdom). Their work has been published by The Astrophysical Journal.

These authors have used the recorded impact parameters of the Chelyabinsk superbolide to search for the orbit of its parent, or dynamically related, body by means of a numerical model validated using asteroid Duende’s close approach data. "It is like when you are given a certain sample color to reproduce and a set of basic colors. You try all the mixtures, until you get the color that you want." compares de la Fuente Marcos.

The results of de la Fuente Marcos & Aarseth’s model suggest that asteroid 2011 EO40 is a good dynamical relative of the parent body of the Chelyabinsk superbolide although there is no spectroscopic evidence linking genetically 2011 EO40 to Chelyabinsk; at least not yet. The common origin of both celestial objects is a possibility that cannot be discarded using the currently available evidence.

The results obtained by de la Fuente Marcos and Aarseth indicate that the Chelyabinsk impactor likely passed a gravitational keyhole on 1982 February 15 during a close encounter with our planet at a distance shorter than 0.0015 AU. As a result of this close encounter, the initial 2011 EO40-like trajectory of the Chelyabinsk meteoroid was changed into the one that drove the meteoroid to strike the Earth over three decades later.

In addition, one of the main conclusions of this study, obtained after billions of simulations and a detailed statistical analysis, is that the main obstacle that prevents us from obtaining the correct orbit of the parent body of the Chelyabinsk superbolide is in the controversial value of its geocentric velocity at impact. This parameter has different values depending on the research study considered and this fact leads to slightly different pre-impact orbits.

As a matter of fact, the researchers admit that it is very difficult to know the exact asteroid that gave origin to the Chelyabinsk superbolide because in the neighborhood of our planet there is a tangled web of overlapping gravitational resonances that confines asteroids of heterogeneous, or diverse, origin to very similar orbits.

"These gravitational resonances create an environment like that of the great cities that attract people from different places and with very diverse backgrounds," says de la Fuente Marcos, who adds "Having two very similar orbits today does not imply that these orbits were also similar in the remote past".

This scenario is the one explored by the same authors in their latest research work to be published in March by the journal Monthly Notices of the Royal Astronomical Society, but that is already available online. "Here we demonstrate using statistics that among the objects close to the Earth (NEOs) there are groups of dynamical origin made of asteroids moving in similar orbits that may not be physically related or have the same chemical composition" explains de la Fuente Marcos.

Several asteroids that have collided with the Earth in recent times, fortunately without fatal consequences, like 2008 TC3 in Sudan or 2014 AA in the Atlantic Ocean belong to these groups and the researchers predict in their work that this will continue happening in the forthcoming future. Regarding the Chelyabinsk superbolide, they suggest that it came from the Ptah group, a collection of asteroids with similar orbits in which one of the largest is the named asteroid Ptah.

In summary, we do not know yet where the object that caused widespread alarm in Russia three years ago came from. But what all the experts agree on, however, is that --lucky for us-- the Chelyabinsk event was a rare one, producing the most powerful explosion since the Tunguska event in 1908. Impacts of meteoroids with an energy yield similar to that of Chelyabinsk happen only a few times per century, and so close to a city as populated as Chelyabinsk, only once every 10,000 years. What nobody knows is when and where the next Chelyabinsk-like event will take place.