Other technological specialities
A treasure from the Toledo Army Museum (Spain)

The sword of a Hispano-Muslim warlord is digitized in 3D 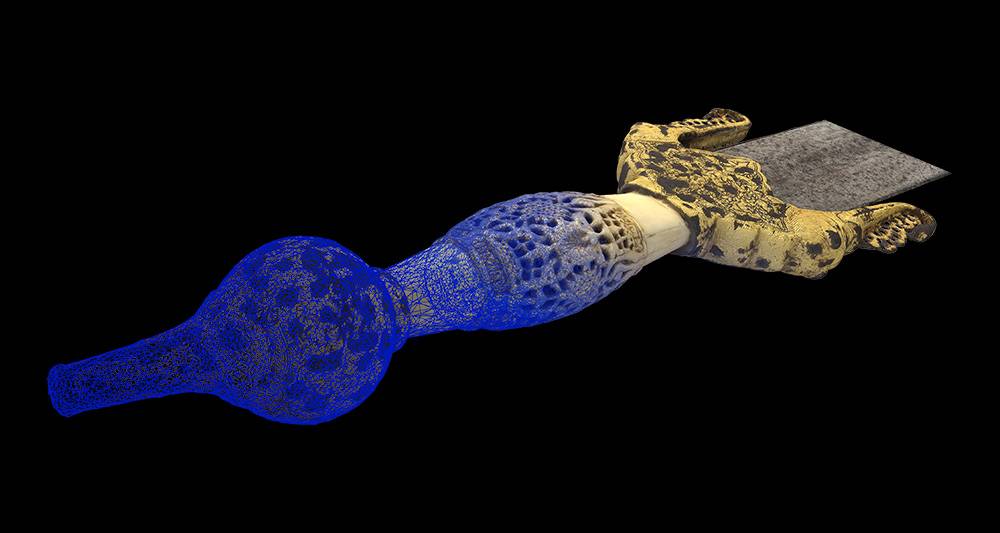 Ali Atar, Warden of Loja and Lord of Zagra, was a Hispano-Muslim warlord at the service of King Boabdil, the last sultan of Granada, to whom he was also related when he married his daughter Moraima. In April 1483 Boabdil tried to take the Christian city of Lucena (Cordoba) with the help of his father-in-law, but they lost the battle: the Nasrid king was captured and Ali Atar died fighting when he was 90 years old.

His magnificent sword, covered with gold, ivory and precious metals then passed into the hands of the Christians and, after many historical vicissitudes, this Andalusian treasure is now preserved and exhibited in the Toledo Army Museum (MUSEJE, Spanish acronym, Museo del Ejército).

To graphically document this valuable piece and make it known through the web, researchers from the Universitat Politècnica de València (UPV, Spain) and the company Ingheritag3D have carried out a three-dimensional digitization process. The study has just been published in Virtual Archaeology Review.

First they photographed the sword from many angles using a technique called photogrammetry. Then they overlapped all the images, drew planimetries (drawings of the meticulous filigree of the grip) and generated its 3D model.

In the workshops of the Toledo Army Museum (MUSEJE) the sword has been digitalized and its photogrammetric image has been generated. / IngHeritag3D

“These techniques offer the possibility of valuing relevant pieces inside and outside museums, since three-dimensional modelling is prepared both for specialists –who can manipulate the piece virtually–, and for being shared publicly and interactively through the Internet,” says engineer Margot Gil-Melitón, co-author of the work.

Using a web viewer, any user can use their mouse to check an exact replica of the handle of this genet sword, a type of genuinely Nasrid weapon introduced in Al-Andalus by the Zenetas (Berber people from whom it takes its name). Ali Atar's sword has a knob in the shape of a bulbous dome, an ivory fist carved with drawings and Arabic letters, and a golden arriax (sword grip) topped with zoomorphic figures.

To record the details of this fine ornamentation, the researchers have devised solutions that have facilitated the analysis of highly reflective materials and complicated geometries. Their workflow could also be applied to characterize other museum pieces.

The other author of the study, Professor José Luis Lerma of the UPV, concludes: “A resource as valuable as cultural heritage can no longer be satisfied with physical conservation: it must be complemented by exhaustive digital preservation in all its forms, which facilitates the investigation of the pieces, their correct safeguarding and dissemination of knowledge to the general public.”