The pollution of waterfowl meat and their poisoning by lead shot has dropped by 50% since this type of munitions was prohibited in wetlands in 2001. This is one of the data in a report from the Hunting Resources Research Institute, which also states that the hunters’ compliance with this mandate has been very high. 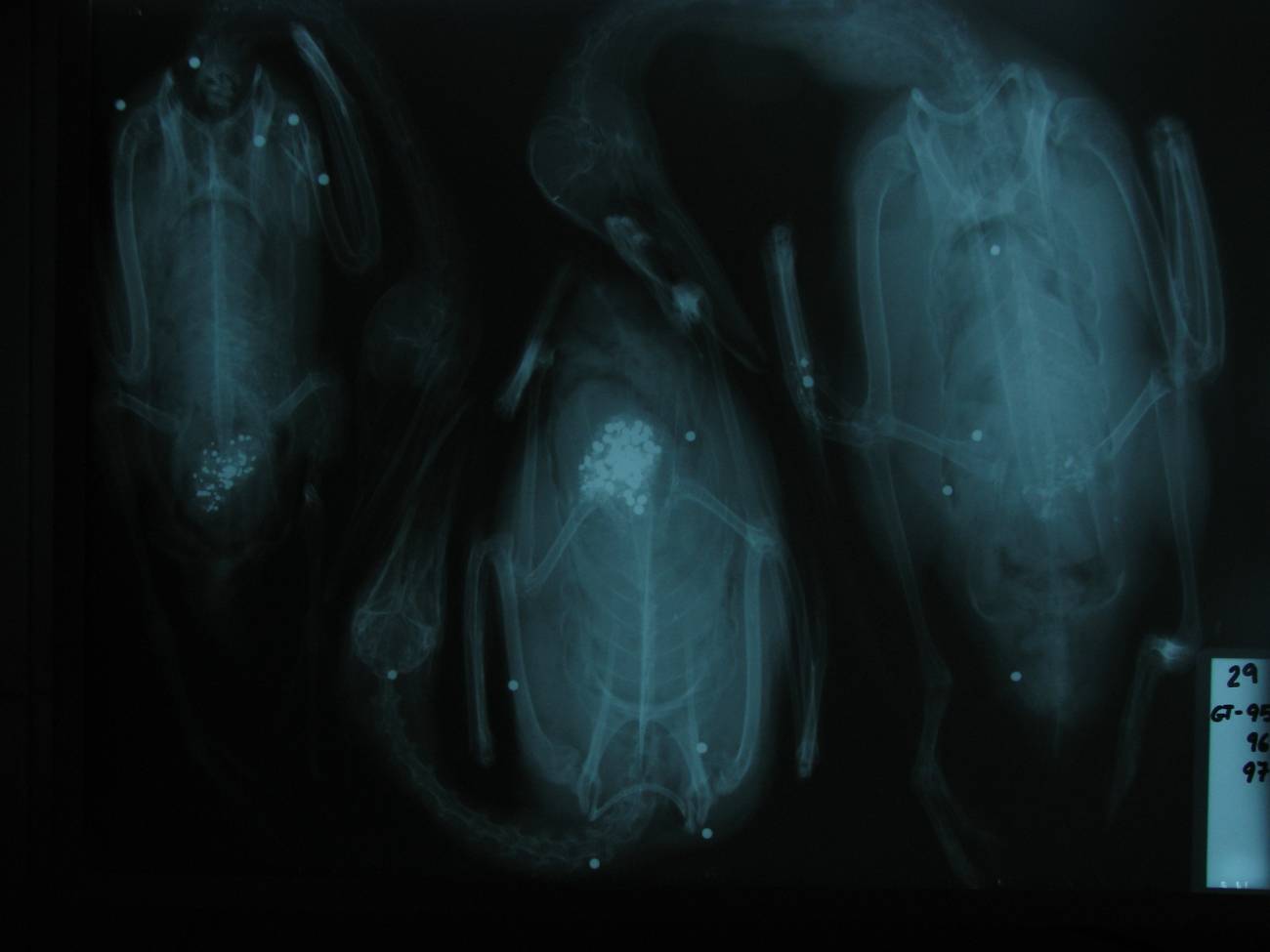 X-ray of ducks with lead shot in their gizzards (ingested) and in the rest of the body (fired). / IREC.

Lead shot was forbidden in 2001 in Spanish wetlands on the Ramsar List of these areas of international importance. Ten years later, this prohibition -and the consequent use of steel shot by hunters- has started to bear fruit, according to a report in the journal ‘Environment International’.

“The most important part of our work is that it shows that, despite it’s still covering a partial area, the change of material from lead to steel shot has reduced waterfowl poisoning and the contamination of hunted meat,” Rafael Mateo Soria of the Hunting Resources Research Institute (IREC) and co-author of the study, told SINC.

Lead shot accumulating in wetlands, with over 100 per square metre in many areas, remains in the sediments for decades.

Its main damage is to the health of waterfowl. When the shot is eaten it is retained in the gizzard and is worn down in the stomach, freeing lead that reaches the animal’s tissues.

“The birds start to develop neurological problems, they cannot move and they also suffer from anaemia. Normally, if they ingest lead, they die with notable emaciation after days or even weeks after starting to ingest the shot,” explained Mateo.

In species such as the mallard, 30% caught at the start of the 1990s in the Ebro delta had ingested lead shot, a figure which has now dropped to 15%. The same trend has been seen in other species such as the northern shoveller, the Eurasian teal and the common pochard.

On the other hand, the case of the northern pintail caught continues to cause alarm since over 70% have shot in their gizzards, a rate similar to that seen three decades ago.

The scientist notes that to discover the reason for the high percentage of poisoning in this species, they will start to fit birds with transmitters. "What we do know is that, because of its type of diet, this is a species with a high risk of ingesting shot. Nevertheless, in others that also have these risk factors, such as the common pochard, the rate has reduced after the change to steel shot," he added.

Even after lead shot was banned, the traces in animals caught with this metal exceed the limits set for meat for human consumption

Another problem caused by lead shot is the contamination of meat. Even after lead shot was banned, the traces in animals caught with this metal exceed the limits set for meat for human consumption.

Lead in the rice fields

Hunters who prefer lead to steel shot claim that the latter is harder and less dense. "With steel, one has to fire a larger shot so that it has the same mass. One cannot fire against the ground because of the risk of ricochets and it is said to damage the shotgun bore. Experience shows that these disadvantages have not affected hunting and that one can continue to hunt perfectly with steel," said Mateo.

Researchers stress that the hunters’ compliance with this prohibition has been very high and that they have continued to hunt waterfowl in the same amount after the change from lead to steel.

However, the law forbids lead shot in protected wetlands only. For this reason, lead shot is permitted in rice fields that ducks use as feeding areas, thus maintaining focuses of contamination for the birds and their meat.

“These animals use the rice fields as well as the natural lakes for feeding. There is little logic in stopping the entrance of a pollutant into a protected area if the pollution continues at the same rate a few metres away. The birds don't understand boundaries. It has not been prohibited mainly because these areas are not protected," said the scientist.

Legislation in most European countries

This study has allowed the assessment of the effectiveness of the measures adopted by countries signing the Agreement on the Conservation of African-Eurasian Migratory Waterbirds (AEWA). At the last AEWA meeting, the parties were asked to assess the effectiveness of the lead shot prohibition in wetlands and of the changeover to non-toxic alternative munitions.

"Some, such as Denmark, have gone further and have forbidden the use of this type of shot in all types of hunting since 1996"

The AEWA is an agreement to protect waterfowl along their entire migration route between Africa and Eurasia. It was signed by some 30 European countries.

According to the scientist, most European countries have legislation that limits or prohibits the use of lead shot. "Some, such as Denmark, have gone further and have forbidden the use of this type of shot in all types of hunting since 1996."

Other countries, such as the Netherlands, Norway and Sweden, have followed. Lead bullets have started to be replaced with copper bullets with a hollow point in some areas to reduce deaths from lead poisoning in carrion birds such as the Californian condor (USA) and the white-tailed eagle (Germany).

Also taking part in the study were researchers from the Instituto do Mar (Institute of the Sea, University of Coimbra, Portugal), the Autonomous University of Barcelona and the University of the Highlands and Islands (Scotland).