It is a two-dimensional material that has promised almost magical applications. Almost ten years after its ‘parents’ won a Nobel Prize, its most mundane applications are coming to market. Although the products are not revolutionary, many companies that use graphene do so with a secrecy that stands out against the marketing of others. 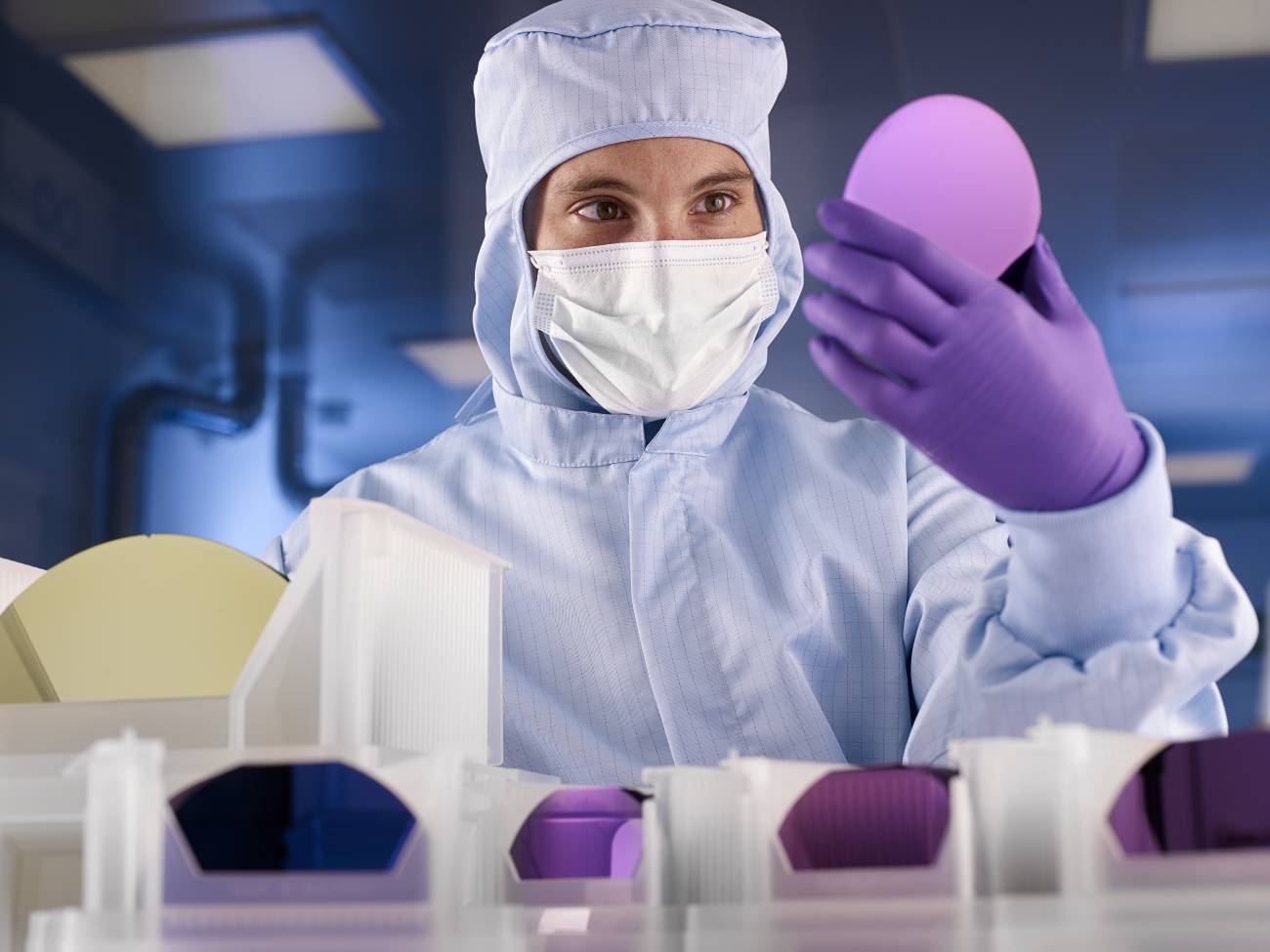 In 2004, two researchers succeeded in reducing graphite to a very thin layer with a thickness of one nanometre. Their creation, called graphene, had such strange properties that many spoke of a revolution in the laboratories. Since then, the industry has been eagerly awaiting the future applications of this material. So much so that Europe has launched the huge Graphene Flagship project, an initiative with more than 150 research centres, companies and a budget of 1 billion Euros to move it from laboratories to shop windows.

Graphene is already on the market, but not, for the time being, with revolutionary applications. As Andre Geim, recipient of the Nobel Prize in Physics and ‘father’ of the material, would say, they are really “evolutionary”. The Zaragoza company GrapheneTech is a good example of this.

GrapheneTech was born in 2010, after Geim was awarded the Nobel Prize, and was the result of a cooperation with the CSIC and the Aragon Institute of Nanoscience. It all started with a reactor the size of a soda can, capable of generating about three grams of graphene a day. Today they manufacture one ton of this material and also develop products ranging from graphene-enriched polymers to biosensors. The Aragonese company is part of the large European flagship. 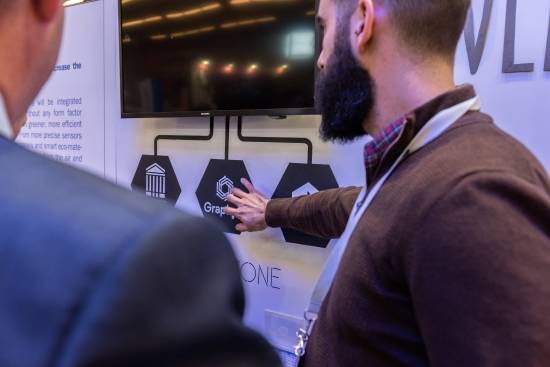 The technology of the Aragonese company GrapheneTech was shown at the Mobile World Congress in Barcelona. / Graphene Flagship

These beginnings weren't easy. “We opted for the mechanical micro-exfoliation of graphene, a production system that no one entertained any hopes for at that time. They told us we were crazy,” recalls José Antonio Paláez, director of operations. But they succeeded: first 3 grams, then 300. Later, 1 kilogram.

“Once we were able to produce graphene, we realized that companies didn't know how to use it,” explains Paláez, an electronics engineer by training. At first, companies and producers made the mistake of thinking that the more graphene they added, the better the results. “We realized that with graphene, less is more.”

“We collaborated with the Spanish ski team and developed a wax to make them slide better on the slopes”, says Peláez. “They went down the slopes like speeding bullets!”

It took them some unpleasant surprises to come to this conclusion. “Since graphene is a good lubricant, we collaborated with the Spanish ski team and developed a wax to make them slide better on the slopes,” says Peláez. “We added very high percentages and the times improved... but too much, they went down the slopes like speeding bullets!”

GrapheneTech's initial idea was to be a large-scale producer and supplier of graphene, but they realized they would help their customers more if they also developed final applications. “We looked at which applications were most immediate for the market, even if they weren't pretty.”

Today they produce graphene powder as a raw material, but also products that use it. These can be grouped into three families, according to their application: energy storage (batteries and super-capacitors); addition of polymers, lubricants and greases; and coatings and inks with conductive or thermal properties.

The percentage of carbon, number of layers and specific area determine the properties of graphene and, therefore, its applications. GrapheneTech takes some of the most commonly used polymers, such as polyethylene, polystyrene and PET, and adds graphene powder to them in order to improve their properties. The list of applications ranges from the aerospace and automotive industry to 3D printing.

Paláez insists on the “less is more” philosophy they learned with the skiers. For example, to improve the mechanical properties of the polymers by 45%, it is enough to add between 0.5 and 1% of graphene. In total, they produce about 5 tonnes of these enriched compounds per day.

Another option is to provide these polymers with electrical conductivity or to make them heat dissipative. In this case, 10% graphene is added. But you can't have everything in life: then the mechanical properties decline.

Avanzare is a company in the Rioja region that, along with GrapheneTech and Graphenea, is part of the national ‘trident’ of graphene production and application development. Its CEO, Julio Gómez, notes that, as of today, the main massive “profitable” use lies in these composite materials, “mainly resin with fibre,” which are used in markets such as aeronautics, vehicle transport, wind turbines and the chemical industry 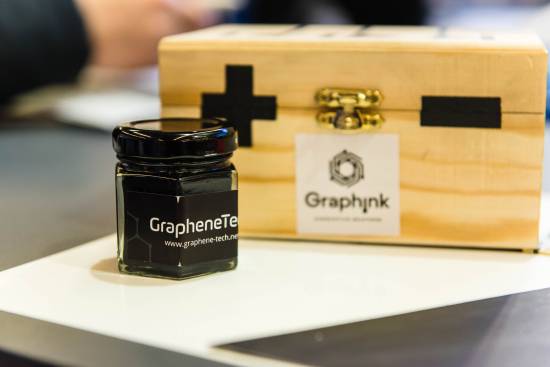 Gómez explains that there are more interesting applications at present: paints, conductive inks and, above all, textiles. “Graphene is going to be crucial in the development of intelligent fabrics and micro-sensors.” He also mentions “very niche” applications in sports, such as sneakers, which “use a minimum amount” and represent “2%” of the total. “A single composite application is equivalent to all tennis rackets made with graphene for five years,” he adds.

GrapheneTech also develops conductive inks. These contain small percentages of graphene and can be used for screen printing, rotogravure, labelling and offset printing. “Their use is focused on flexible electronics,” Paláez says. For example, biosensors that determine protein types, blood glucose and other markers. “Diabetics use disposable labels, and the carbon part where the blood drop is placed is the graphene ink that is used now.”

The company is currently working with several companies to apply these conductive inks on wearables. Paláez gives a couple of examples, such as a sportswear whose temperature can be controlled with an app: “We have printed resistances in the lumbar part so that it reaches between 30 and 65ºC.” Also a jacket for runners whose sleeve has seven sensors printed that allow Bluetooth control of mobile music and the answering of calls.

Similarly, they are working with a Korean company to develop a flexible lithium-ion battery. “It's been a year and we already have the first button batteries, with a 50% improvement in capacity and a 35% improvement in durability. The idea is to manage to create one that is like that of a smartphone.” 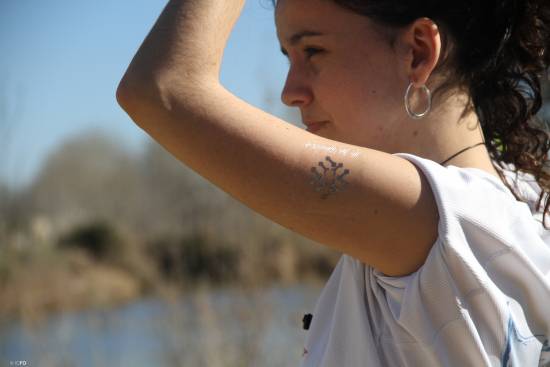 Graphene can be used in wearable technologies, such as this ICFO patch. / Graphene Flagship

“For many of the companies we work with, graphene is not a marketing issue,” says Paláez. “It seems that, when a product is launched on the market, it has to make noise and everyone has to see that it is being used, but for these companies, graphene as a marketing tool isn’t going to make them sell more.”

In fact, the engineer finds that the companies prefer not to reveal the secret. “When it gives competitive results and you can hit the market, companies do not want to disclose that their product carries graphene, they keep the ace up their sleeves.”

“When it gives competitive results, companies do not want to disclose that their product carries graphene, they keep the ace up their sleeves”, says Peláez

Gómez believes that the difference between a marketing application and a mass application is that the latter will never specify the use of graphene: “Putting graphene on the label is marketing. If your tennis racket is so good because it has graphene, why are you going to advertise it? Composite material is not sold because it has graphene, but because it's better than that which doesn't contain graphene.”

Many of the products developed are for internal business use. Paláez quotes a paint company that transports chemical substances: “They have to paint the containers every two fillings because they are very aggressive compounds. We have developed a graphene paint that is better at withstanding corrosion and for them it is more than satisfactory, but they don't market it.”

The situation has attracted attention because it is the opposite of the marketing that usually surrounds this material. “We have come across some fraudulent competition that has done us a lot of harm. They have used the graphene appeal to sell more. We know they don’t use it, which is why they’re not part of the Graphene Flagship initiative.”

Neither mattresses nor dentures

According to Paláez, graphene mattresses are “the biggest scam in history.” He notes that they investigated the subject and the results obtained “were worthless.” The explanation is that, by injecting the material into expanding foam, the percentage is greatly reduced, when the target is for the sheets to interact with one another. “We looked for evidence of heat dissipation but the results were the same as without it,” he says.

“We have come across some fraudulent competition that has done us a lot of harm. They have used the graphene appeal to sell more”

Something similar happens with paints and teeth, which share the same problem. “Graphene powder is completely black,” says Peláez. “A lubricant with 0.05% graphene is already completely black.” This is a problem in products that, especially in the case of teeth, must be white. “Dental prostheses break after three months because the additivation is with calcium carbonate.”

“It's interesting to say that a product contains graphene because this helps to sell it,” says Peláez in relation to these companies that sometimes don't even use the material. “Others use it and keep quiet because it is a strategic product that differentiates them from the competition.”

Paláez says that this year they have taken several of their products to the Mobile World Congress in Barcelona, and that people were surprised that they were being marketed. “They are waiting for the lift to the Moon, which is crazy, and developments such as the new generation of processors and transistors. That's going to take a while,” he says. “There have been announcements that nobody believed; graphene, like any material, needs its time, but industrial applications are beginning to be seen,” adds Gómez.

The Sinc agency participates in the SCOPE European project coordinated by FECYT and financed by the European Union through Horizon 2020. The objectives of SCOPE are to communicate visionary research results from projects associated with the Graphene Flagship and the Human Brain Project, as well as to promote and strengthen relations within the scientific community of the Future and Emerging Technologies Emblematic Research Initiatives (FET Flagships) in the EU.