Aisoy Robotics, a start-up based in Elche (Spain), develops robots capable of recognising the person with whom they interact and simulate emotions. A nurse from the USA, Juan’s mother, confirmed its potential in autism therapies three years ago. Now, the firm is preparing a clinical study to test its efficacy with 50 children. 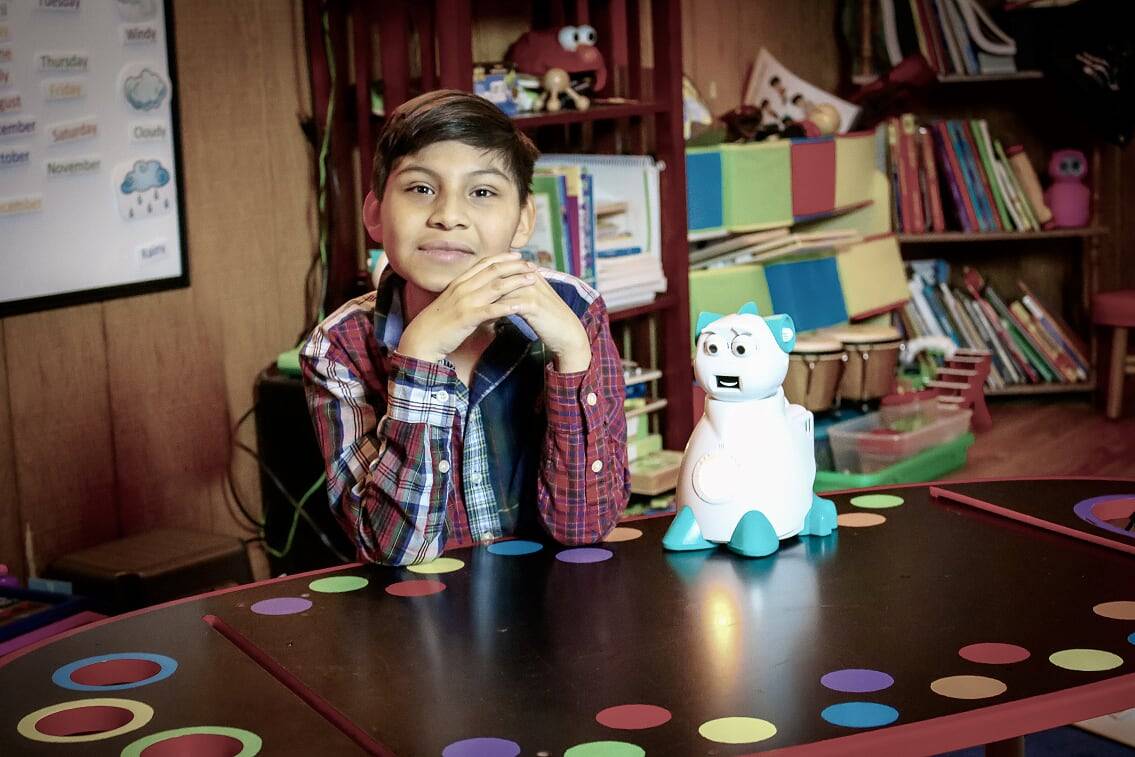 Almost a decade ago, the computer engineer José Manuel del Río founded a start-up called Aisoy Robotics, located at the Scientific Park of Miguel Hernández University (Elche, Alicante). “The idea was to develop social robots with artificial intelligence at an affordable price for areas such as education and accompaniment for the elderly,” he told Sinc.

In collaboration with David Ríos, professor at the Institute of Mathematical Sciences (ICMAT) and scientific director of this company, they created the first model: Aisoy 1, which the firm called “the first emotional robot for the consumer market.”

These small robots, measuring an approximate 22 centimetres in height, are now on their sixth generation. Their latest versions are Aisoy KIK and Aisoy EMO. “They’re based on Raspberry Pi 3,are easily programmable with Scratch and have sensors and actuators all over their bodies, thanks to which they can compile information on their surroundings and act on them,” says Ríos to Sinc.

As Ríos explains, “they’ve been designed to display emotions that manifest in gestures and different tones of voice and they can show happiness, sadness and even humour. Moreover, they can speak and understand English, French and Catalan as well as store experience in their memories to respond in a manner similar to that of a person.”

As Ríos explains, "they have been designed to display emotions that manifest in gestures and different tones of voice, and are capable of showing joy, sadness and even humor. In addition, they speak and understand English, French and Catalan, and can store experiences in their memory to respond in a similar way as a person would".

The robots of Aisoy Robotics, whose prices range from 300 and 400 Euros, are now already being used as a support tool in more than one hundred educational centres in Spain and other countries. Some 2,000 units have been sold worldwide in the last few years, according to the company.

José Manuel del Río points out that, at first, they had not considered the idea that their robots could be used in therapies for children with autism “due to a sheer lack of knowledge.” However, in 2015 “several things that happened made us think of their possible use in this area,” he stresses.

That year, a study was published on the use of various robot models, including Aisoy 1 version 4, as a tool to help develop social skills in children with autism spectrum disorder (ASD). The first signatory of the work was the Spaniard Jordi Albó-Canals, an expert in artificial intelligence and social robotics who currently works between Boston and Spain and is a research associate at MIT and Tufts University. 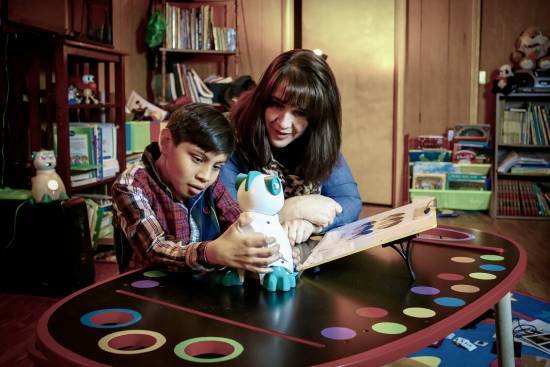 Among those who read that article was Lisa Armstrong, a nurse living in Humboldt (a small town in Kansas) and the mother of an autistic child, who was desperately in search of tools that could help her communicate with her son.

“At the time –Armstrong has told Sinc by email– Juan was 11, and I was on the brink of despair. Neither private therapy nor the limited means of support of the school he went to were of much help to him. His behaviour was getting worse every day until he became aggressive.”

Armstrong had read other studies that dealt with the benefits of using social robots in therapies for children with ASD. “But many of the robots mentioned were not available for families and the few that were could only be purchased at a price I certainly couldn’t afford,” she explains.

At the time, the only robot available in the market for people not involved in scientific research was NAO, from the Japanese firm SoftBank Robotics, which cost more than 10,000 dollars (about 9,000 euros).

However, Aisoy 1, from the Alicante-based company, did have a price she could afford. She bought it online on an offer for some 300 dollars (265 Euros) and programmed it herself.

“It was quite an adventure to learn to programme the robot because I had no experience in either programming or robotics. But thanks to José Manuel del Río and his team, I found the information and tools needed to start to write simple programmes, using Scratch with pre-programmed code blocks, with which you can drag and release the blocks that control the robots in whatever order you want.”

This is how she got to write her first routine, which she called Good talking Juan. Armstrong remembers with excitement what she felt when she heard her son repeat the word “hello” for the first time. By means of the different individualized programmes, she has been creating with the help of the Aisoy Robotics team, especially its technology director, Pablo García, the child has acquired a vocabulary and learned to use words in certain situations.

“Juan is mainly non-verbal, but by using the robot he has learned to repeat certain keywords and shows that he knows their meaning. Besides, the robot has helped my son subdue his reactions to excessive stimuli and to emotions that overwhelm him. His tantrums before could last hours and now, with the support of a ‘calming’ programme of the robot, he manages to calm down after five minutes,” she points out.

She herself learned to program the robot with a series of routines that helped Juan communicate and say his first words.

Also, with the help of the android, she has also succeeded in teaching Juan basic notions of mathematics and social norms. But what matters most, as she remarks, is having managed to communicate with him. “It’s not my voice he pays attention to, but the robots. However, the content is mine and I see Aisoy 1 as an interpreter with which I can talk to my son,” says Armstrong.

Juan is now 14 and his mother is in charge of his education at home following a customised programme that was specifically created for him by the therapists. “Fortunately, the management of the hospital where I work allows me to do shifts that are compatible with my family life,” she says.

Lisa Armstrong developed so close a relationship with the Aisoy Robotics team that the nurse has now become the distributor of the Spanish company’s robots in the United States, according to José Manuel del Río.

“Lisa’s experience with our robots and a few other occasional cases have encouraged us to enter the area of therapies for children with autism, in collaboration with experts from the Miguel Hernández University Hospital”, José Manuel del Río comments.

But these isolated cases are not statistically significant, which is why, in his words, “we have commissioned the design of a clinical trial to check the effectiveness of Aisoy EMO and KIK as useful tools in these therapies.”

Albó-Canals has been chosen by Aisoy Robotics to design this trial, in collaboration with researchers from Tufts University and the Federico Santa María Technical University (Chile).

As the MIT expert has explained to Sinc, this pilot study will explore the viability of using Aisoy robots “as an attractive platform for positively impacting on the social and emotional development of children with ASD.”

If funding is secured, the trial will take place in Spain in the homes of 50 children with autism. "The aim is to use the robot as an enabler that creates interest and curiosity in the participant to communicate with family and friends.

The advantages of this technology, according to Albó-Canals, “lie in the fact that there are already positive experiences in some cases of children with autism and that it’s a platform with an affordable price. Moreover, they can be easily programmed with Scratch”.

Also, he adds, “there is much talk of using robots that imitate human appearance for such therapies, but in my opinion, the size of Aisoy automata is very interesting because they can serve as desktop robots that can adapt to spaces designed for people. And their appearance, which is a combination between that of machines, animal and animated cartoon characters, places them in a very good position of acceptance.”

The complexity of human communication

Therapies using robots for children with autism “were begun two decades ago,” Luis M. Martínez, a researcher at the Alicante Neuroscience Institute, explains to Sinc. “Children with this disorder see, hear and feel the world in a different way, which affects the manner in which they interact with others. Human communication is of great complexity and involves the look in one’s eyes, one’s gestures, tones of voice, which can convey happiness, sadness, sarcasm… and this is a great challenge for children with ASD.” 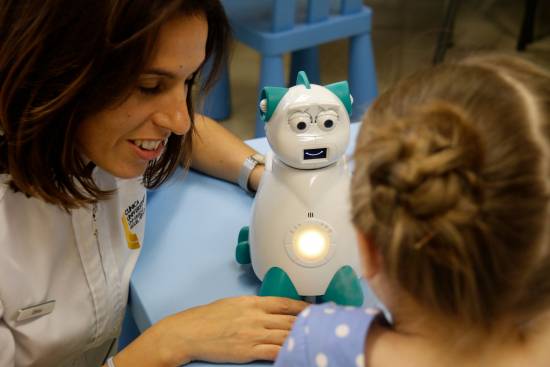 Social robots –says Martínez– “manage to interact with these children in a simpler way. They simplify the whole process and the objective is achieved because they don’t feel overwhelmed by an avalanche of information and therefore feel more comfortable.”

What matters in such therapies, he adds, “is that both family members and therapists become involved and that there should not only be communication with the robot, because if so, the transfer doesn’t take place and the isolation continues.”

One of the problems so far lay in access to these robots by the families. This is why, for Martínez, “Aisoy’s accessible, simple technology is very interesting, as is the approach of the study because it’s going to be carried out in the family household rather than a doctor’s office or laboratory.”

So far, one of the few scientific studies with social robots in the homes of children with ASD has been done by a group of researchers of Yale University, led by Brian Scassellati, a professor of Computer Science and Cognitive Sciences at this American institution.

“In order to carry out our study, we need financing. Our company is a small one and we can’t do so on our own,” says the founder of Aisoy Robotics

Scassellati’s team tried out autonomous robots in therapies with twelve children, in which caregivers and family members also participated half an hour a day for a month. The results were published in Science Robotics magazine in August last year.

“The robots were designed to guide children through a series of social skill games with programming that adapts to the strengths and weaknesses of each one of them, changing the difficulty of the tasks in order to improve learning,” explains Scassellati.

According to the study leader, the children’s attention was improved even a month after the sessions were over. Their behaviour was also more social, not only with their families but also with other people.”

José Manuel del Río remarks that the study they are preparing in Spain is “more ambitious and has a higher sample of children than that of Yale University.” But to carry it out –he adds– “we need financing to cover some of the expenses; our company is a small one and we can’t do so on our own.”

Del Río and his partners are still in search of this sponsorship, which would allow them to test this desktop android in 50 households with a well-prepared clinical trial. Only in this way will they be able to determine if the tenacious work of Lisa Armstrong and her son Juan with the small Aisoy robot, which has changed their lives, could be of help to more autistic children