The first cockroach to feed on lizard tears 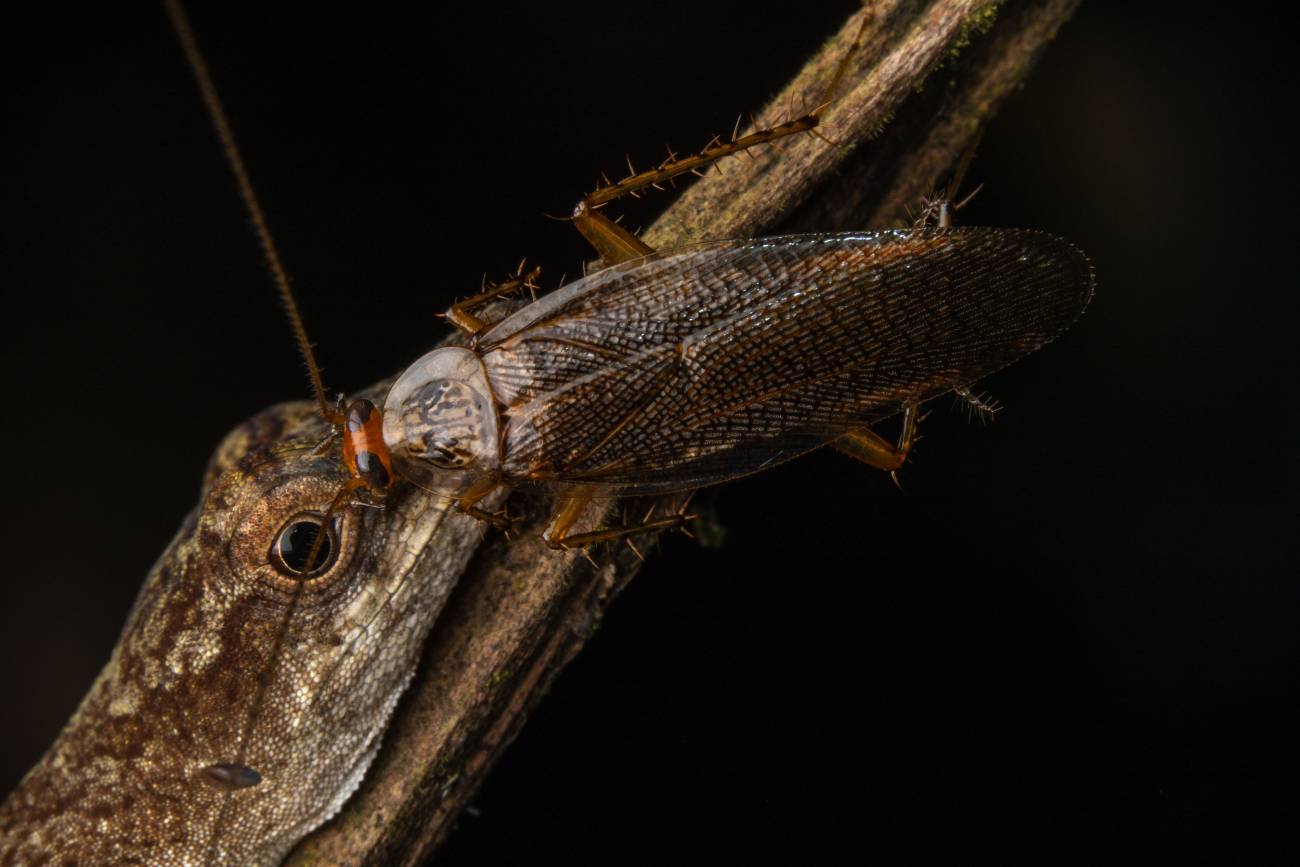 Photograph of a cockroach drinking the tears of the anolis in March 2019 in the Ecuadorian Amazon. / ©Javier Aznar González de Rueda

On the night of 29 March 2019, photographer Javier Aznar González de Rueda observed a slender anole (Anolis fuscoauratus) sleeping on a branch in the Ecuadorian Amazon. Above its head, a cockroach lay motionless with its mouth in the corner of the reptile's eye, which scene was immortalised in a photograph. After several minutes, the insect moved away, and the lizard opened its eyes slightly without flinching.

The insect was feeding on the tears of the anole, an action known as lachryphagy, which is generally practised by animals with proboscises

What was the cockroach doing? The insect was feeding on the tears of the anole, an action known as lachryphagy, which is generally practised by animals with proboscises (an elongated, tubular appendage on the head of certain insects) such as moths and butterflies, and even bees, to supplement their diet of salts and other nutrients through the secretions of turtles, crocodiles, lizards, or birds.

Thanks to the photographer's image posted on social media, the scientist Matthijs P. van den Burg, from the National Museum of Natural Sciences of Madrid (MNCN-CSIC) found it and together they set out to write a new study describing the first observation of tear-feeding by cockroaches, a very abundant and common group of insects.

They belong to the Blattodea, and there are more than 4,500 known species of cockroaches from 500 genera. But despite their large numbers and their common occurrence even in households, we still have a lot to know about these flat-bodied, brownish-red insects.

The results, published in the journal Neotropical Biodiversity, reveal that cockroaches have a broader diet than previously thought. “These insects therefore visit their predators at night to find these food sources, which could be triggered by high competition in tropical rainforests,” van den Burg tells SINC.

Day and night to drink tears

Although so far all lachryphagous species were thought to suck up tears thanks to their long proboscis, called the spirothrombus in the case of butterflies, species lacking this organ can also do it. Nevertheless, they risk damage or being eaten because, like the cockroach with the slender anole, they are near the host.

To reduce the risk of predation, these Blattodea feed on these secretions at night, although some diurnal reptiles are more active in the dark. This behaviour has surprised the researcher because until now it was thought that lachryphagy was a diurnal activity.

“Our work provides new insights into the natural history of cockroaches,” says the expert, from the MNCN's Department of Biogeography and Global Change. This behaviour could also harm the reptiles if viruses or bacteria are transferred during the interaction.

For the biologist, the discovery of cockroach lachryphagy on lizards, which is very difficult to observe, allows us to better understand the interactions between species around the world. “We lack this information for most of the species described,” van den Burg concludes.