A small plesiosaur lived in Spain 125 million years ago

Plesiosaurs, erroneously viewed as dinosaurs, inhabited all the seas between 200 million and 65 million years ago. In the Peninsula, only scarce remains of these long-necked reptiles had been found. Now a group of palaeontologists has found the most abundant collection of fossils in Morella, Castellón. Among them, there is one vertebra that belonged to a type of plesiosaur never before discovered in the country, the leptocleidus. 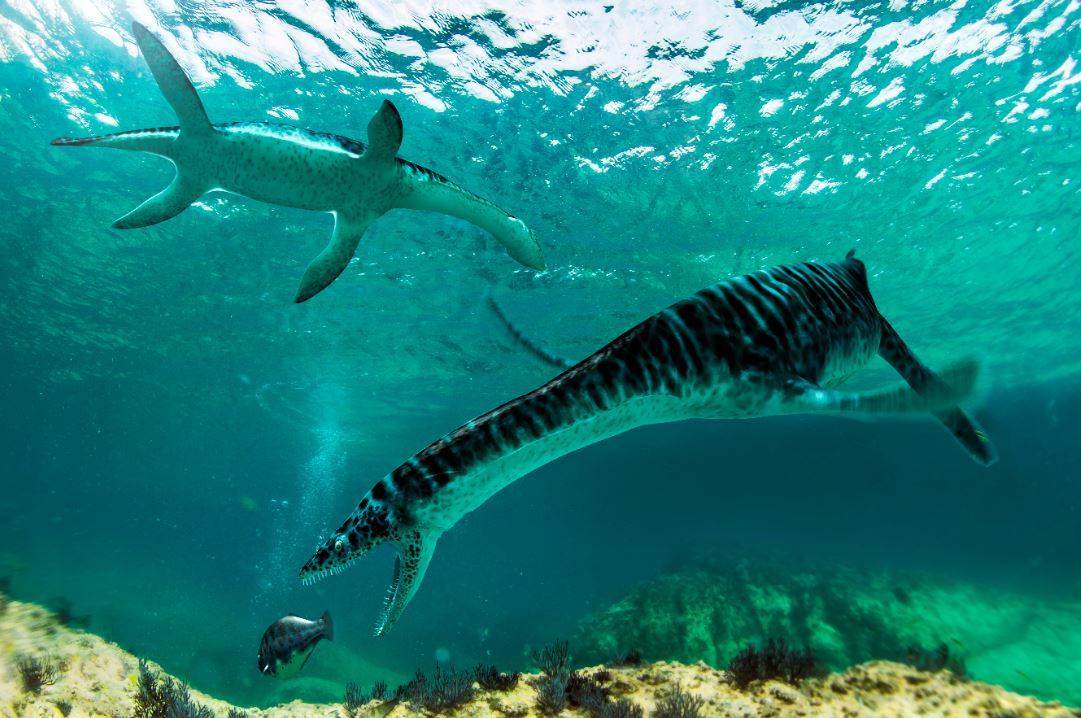 The leptocleididae, whose remains have been found for the first time on the Iberian Peninsula, were smaller plesiosaurs with shorter necks living in shallow waters. / José Antonio Peñas

During the Lower Cretaceous, some 125 million years ago, the Iberian Peninsula was very different from how we know it today. So much so that in what is now the village of Morella in Castellón, for example, a large delta had developed along the coast.

Until now leptocleidus were believed to have inhabited only England, Australia and South Africa

These shallow waters were home to a group of marine reptiles known as plesiosaurs, with small heads, long necks, short tails and wide, cylindrical bodies with large fins. Although they co-existed with the dinosaurs and became extinct at the same time, these reptiles, which may have exceeded 15 metres in length, were not closely related to the dinosaurs.

On the Peninsula, fossil findings of these animals have been rather scarce, limited and fragmentary. Evidence of this is a partial pelvis recently found in the town of Algora, in Guadalajara, which belonged to an elasmosaurus, a type of plesiosaur with such a long neck that a century and a half ago, when the species was discovered in the USA, it was thought to be the tail.

In a new study, published in the Cretaceous Research journal, a group of UNED (National Distance Education University) palaeontologists has now discovered, in the quarry of Mas de la Parreta in Morella, an abundant and exclusive collection of remains of several plesiosaurs specimens that coexisted with the dinosaurs.

“The plesiosaur material identified in Morella is exceptional for the record of the Iberian Cretaceous,” Adán Pérez-García, a scientist in the Evolutionary Biology Group and co-author of the work, has declared to Sinc.

The score of teeth and the large number of vertebrae (cervical, pectoral, dorsal and sacral) found cannot be assigned to a particular group of plesiosaurs. However, mention should be made of an almost complete cervical vertebra that can be attributed to a leptocleidus, a smaller type of these marine reptiles, which until now was believed to have inhabited only England, Australia and South Africa.

“It is the first reference of these animals in the Iberian Peninsula,” the palaeontologist points out. Leptocleidus correspond to a group of very peculiar plesiosaurs, no more than three metres long, and which, unlike other plesiosaurs, had a relatively shorter neck.

Leptocleidus measured about three metres long and had a relatively shorter neck.

“Their bodies were robust and their heads relatively large and triangular, and they were able to adapt from life in the open sea to that in coastal environments, such as the large delta located in Morella during that part of the Lower Cretaceous,” explains the researcher.

Unlike other plesiosaur species, the leptocleididae lived in generally shallow waters, and it is believed that they were even able to adapt to brackish water environments, such as the mouths of large rivers very close to the coast.

Over the years, scientists have discovered a great diversity of vertebrates at the quarry site, including some that may have inhabited the Morella delta, as well as others whose corpses were washed away and accumulated in the current mining operation.

Along with the plesiosaurs, sharks have also surfaced, as have amphibians, other reptiles, including pterosaurs –flying reptiles–, land, freshwater and sea turtles, freshwater and marine crocodiles, and dinosaurs.

“The vertebrate fauna of the Lower Cretaceous of Morella is very well known. This is where some of the first dinosaur remains identified in the Spanish register in the second half of the 19th century come from,” Pérez-García points out to Sinc, adding that paleontological activity in Morella has considerably increased in recent years.