The more feathers a male sparrow carries to the nest, the more eggs the female will lay

An international team lead by the University of Granada has found that female sparrows will invest more energy into laying eggs according to the male’s ability to fill the nest with feathers which serve to insulate the chicks from the cold and keep them alive. 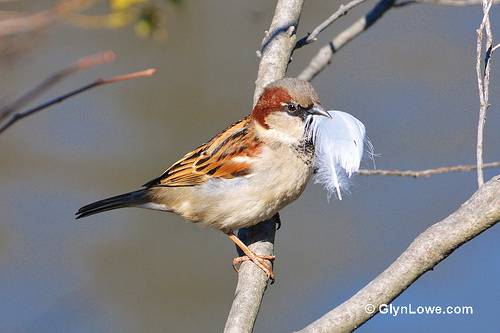 90% of the sparrows are monogamous and keep their partners from one year to another / Glyn Lowe Photoworks.

Scientists from the University of Granada, in collaboration with the South African University of the Witwatersrand and the Percy FitzPatrick Institute at the University of Cape Town, have discovered that the female house sparrow (Passer domesticus) invests more energy into laying eggs when the male brings more feathers to the nest.

“We conducted an experiment with two types of treatments and a control group. In total, we observed the behaviour of 50 pairs of sparrows,” Lola García López de Hierro, the study’s main researcher, informed SINC.

According to their results, carrying feathers could be a result of sexual selection by the females as they put more energy into reproduction if they have more feathers in the nest. “They provide excellent insulation and the females know that less chicks will die if the male brings more feathers,” the expert stated.

The experiment was conducted in the natural environment of Dassen Island (South Africa) and this is the first time this behaviour has been documented in the house sparrow.

Taking away and adding feathers

The researchers took away and added feathers to the nests of the fifty pairs of sparrows during these birds’ different mating seasons.

A first stage in the treatment consisted of spending an hour observing the behaviour of the pairs with chicks less than five days old in order to register diverse variables and watch their behaviour if a series of feathers were taken away or if these feathers were left in the nest. The experiment was then repeated with chicks over ten days old.

“We had film recordings of the nest where we gathered information on sparrow behaviour and, using a table of variables, we were able to conclude that the more feathers in the nest, the more eggs the sparrows laid,” García-López de Hierro pointed out.

They also observed that when the females noticed there were feathers missing they animatedly called the males and the male sparrows responded by bringing more feathers and dancing around the female on his return to the nest.

Ninety per cent of sparrows mate for life and keep the same partner from one year to the next; however, numerous factors influence the choice of mating partner. For example, the size of the black patch on the males’ chest, commonly known as the bib, indicates their biological quality. “The bigger the patch, the higher the quality, an aspect that females can easily select for,” the scientist explained.

Other factors that demonstrate the male’s biological capacity are the redness of the head, in other words, “the more carotene they invest in the colour of their feathers, the more reproductive success they will have,” and the ratio between the size of the beak and the size of the tarsus.