If you do not care about the climate crisis, this is because it has not been properly explained to you 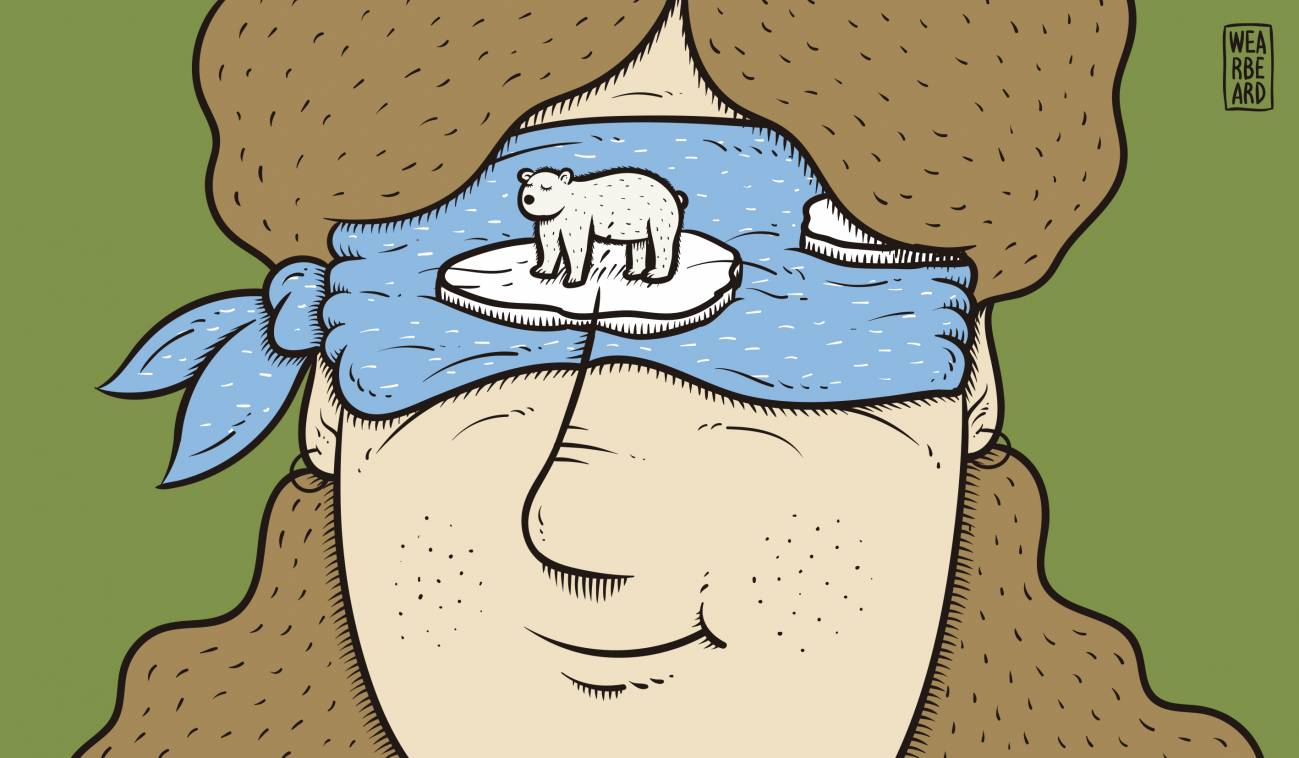 Cognitive biases make us ignore what lies in store for us. / Wearbeard

If we put a few bacteria in a flask full of culture medium, we know for sure that they will divide unstoppably, doubling their population every twenty minutes. This growth rate is unsustainable for them, but they are single-celled beings that can do nothing but exhaust all their resources while their population increases exponentially.

As far as we know, bacteria do not see glass, nor do they think well about the future, and therefore cannot imagine a sustainable life.

If we draw a graph of their growth, it would be very similar to that of humans since the industrial revolution, except for its scale: minutes would equal years. And, much as we can see that our planet has some limits and we know that we cannot escape much further, it is difficult for us to live in a sustainable way. An inability marked by flaws present in our overvalued brains: our most distinctive organ is practically blind to climate change.

It does not care about what we perceive as something distant in time or space. In fact, it only allows us to really take it into account on days of extreme weather events.

It does not like to deal with uncertainty and it smells it every time scientists update impacts as their knowledge advances. Also, it does not understand something that is not personal, abrupt or immoral as dangerous.

It makes us very social beings, and if our peers do not do anything, neither do we. If all this is true, it is a common tragedy.

Not to mention that we like to think that everything will be fine and that the future will not be very different from the past. With all these biases, identified over the years by scientists from different disciplines, we are far from being well equipped for what lies ahead.

Words that mean nothing to us

Moreover, historically, the communication of climate change has only fed these biases and helped, to some extent, to lead us to the current situation.

Starting with the polar bear on a piece of drifting ice, a recurring and shocking image that sends a dramatic message. And it works beautifully to be remembered and shared. Unfortunately, it works badly in helping us do something. Various studies  indicate that negative and frightening messages only paralyse us. Also, the polar bear, for the vast majority of people, is far away, reinforcing psychological distance.

For years, the most aseptic terminology possible has prevailed when talking about this complex process: climate change. Do you remember global warming? Well, neither the Republicans during their campaign trail nor scientists wanted that phrase – the former, because it was not convenient for them; and the latter out of purism: global warming did not define all of its causes and consequences.

We are now trying to call it a climate emergency, but it can be a problem to apply the word “emergency” to something we do not feel as such. It overfeeds the “Peter and the Wolf” effect we have been carrying around for years. “Emergency” is not a word that works well on the day the sun rises again after a flood. “Emergency” is not what the new grass smells like when it grows where there was a fire.

On the other hand, a misguided journalistic equidistance has often confronted denialists and scientists as equals, inflating their marginal representation from 3% to 50%. This subliminally increases the sense of uncertainty, instead of showing the very broad consensus among the scientific community.

Neither right nor left

In communication, the figure of the spokesperson, the public face of the problem, the person who leads the change, matters a great deal. Once again, a great failure. Historically, we have been satisfied with very popular characters who could amplify the message, but we did not think if that person contaminated it ideologically. Al Gore is the best example, but there are many others. And they all have one thing in common: none of them is conservative.

That fact that the cause becomes political is serious, because our brain processes what we think is a block. Human beings understand the world better in groups of things and reject ideas that belong to the opposite group. That is why, despite the fact that the fight against climate change has all the necessary elements to convince and worry a right-wing electorate (it is a conservative fight), we have lost 50% of our support at once.

But not everything has been bad in these years. We are beginning to understand how important narratives are to change our mental models or to shore up our biases. Literature, for example, can help combat psychological distance.

That is why there is an entire literary genre dedicated to bringing climate change to the present. It is called cli-fi: climate fiction. And it is the Black Mirror or the Years and Years of climate change. Books like Ian McEwan’s Solar, Marce Theroux’s Far North or Margaret Atwood’s Year of the Flood help us to attract our brain a little bit and gradually bring us closer to action.

We are also learning to shape the message so that it resonates with the more conservative electorate. Because there are angles like “the planet you leave to your grandchildren”, “economic independence from renewables” or “keeping the good life.” Not to mention how proud we are of our country and how little we want our natural heritage to change, perspectives that have rarely been addressed in campaigns launched from the left, generally aimed at raising awareness by assigning blame.

Even the IPCC, the scientific consensus made document, understood that their way of communicating was often too ambiguous. They decided to add a label in brackets to their statements, in order to indicate the scientific certainty (low, medium or high). To further disambiguate the discourse, one study pointed out that adding a numerical percentage of certainty would help: it is less ambiguous than using words for which we can each think of a weight. It is these small details that can determine enormous differences in behaviour.

But we cannot think that communication is going to save us, because, at best, it is going to help individuals to slightly modify their behaviour in a personal capacity. And the average citizen has too much serial bias to achieve a zero emissions target. At best, we can slow down the process slightly and live a few more generations on our one planet. Which is no small feat.

The highest possible level of communication is to convince the brains of those who lead us to take drastic measures that can put a stop to it. In the end, climate change is a political problem: it seriously affects the economy, public health and national security. Mentioning it as such may again give politicians a boost to invest in the development of scientific and technological solutions.

After all, perhaps the only way out of this climate crisis is to find a scientific formula to balance the scales. And those best prepared to get that fantastic remedy out of a hat are the very same people who have studied how the greenhouse effect produces global warming, how our brains fool us, or how often a handful of bacteria are doubling their population by stirring in a glass flask.

Maybe this way we will be luckier than them.