Milk Banks: the altruism that saves the lives of the most vulnerable babies

Breastfeeding is beneficial for all newborns, but it is essential for premature infants or patients, because it improves their prognosis considerably. However, you cannot always count on it. This is where the generosity of women who donate their milk for creatures that are not theirs comes into play. Spain already has 13 centers that in 2016 distributed almost 7,500 liters to 2,281 babies. 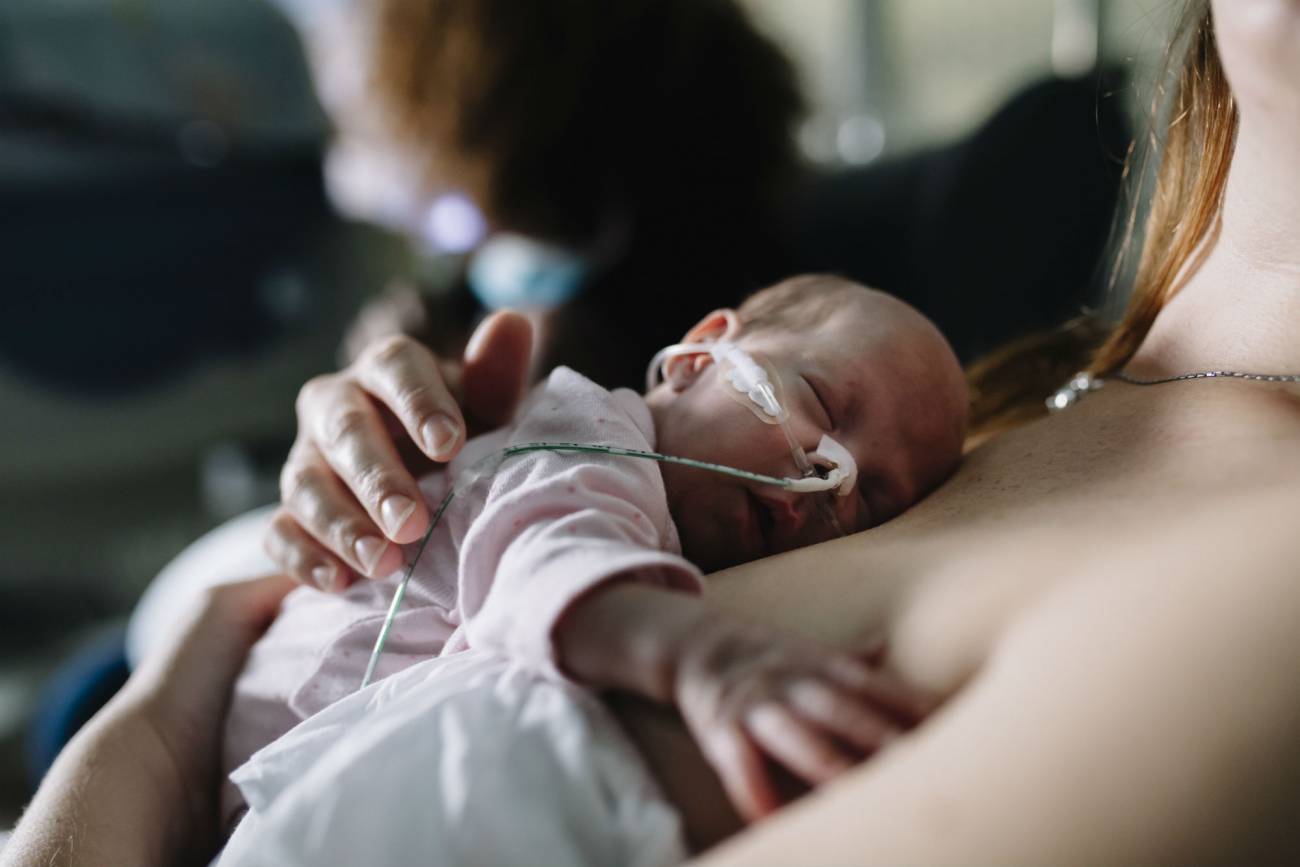 Basically, the candidates must be women who are nursing, willing to have their milk extracted and enjoying good health. / Elena de la Varga, Servicio de Neonatología H. La Paz

No doubt. Breast milk is the recommended food for all newborns. But when there is not enough of the mother herself, donated milk may be the best alternative, especially in children who are born early or sick.

For this, the human milk banks were created, in charge of collecting, processing, storing and dispersing this biological product with all the guarantees. Its purpose is to solve the feeding problems of the newborn until his mother can breastfeed.

"It's one more pillar of support for breastfeeding. It provides milk from other women to those high-risk newborns that still do not have their mother's or when the mother does not have enough milk”, Nadia Raquel García, coordinator of the Regional Breast Milk Bank of the Community of Madrid, located in the 12 de Octubre Hospital.

In fact, several studies point out that in premature infants the artificial formula supposes an increase in pathologies such as necrotizing enterocolitis (NEC), an intestinal disorder typical of premature babies and other vulnerable newborns.

Moreover, in 2001 the World Health Organization (WHO) stressed that human milk banks are "one of the best health strategies in the reduction of infant mortality and protection of breastfeeding."

Since breast milk is a scarce resource, it is essential to prioritize those who will be recipients and adjust the characteristics of the donated milk to those of the child who receives it, always taking into account availability.

Thus, in the first days we try to give newborns of maximum risk (with less than 1,000 grams of weight or less than 28 weeks of gestational age) milk from donors whose children had at the time of extracting that milk.

"If they were also mothers of premature children, it is even more appropriate," says García, who is also president of the Spanish Association of Human Milk Banks (AEBLH, Asociación Española de Bancos de Leche Humana), created in 2008. "However, many times we cannot adjust so much and we have to deliver milk with longer life of the child."

For very premature or sick newborns, the first weeks of life represent a critical period for the development of pathologies related to immunity. Feeding with breast milk and donated from birth helps to develop resistance "more adequately." Likewise, the greater the volume of maternal or donated milk they receive during the admission, the greater the beneficial impact on these children at risk.

"It is important to start with human milk as soon as possible since it favors mobilization and tolerance, intestinal maturation and colonization by beneficial germs for the vulnerable premature infant. The milk of the mother herself is preferable, but if it is not available, the donation is the best option, "clarifies Sinc Marta Cabrera, neonatologist at the Hospital Universitario La Paz.

How to be a milk donor

For very premature or sick newborns, the first weeks of life represent a critical period for the development of pathologies related to immunity

In the absence of global data in Spain for 2017, in 2016, 1,565 donors were registered, representing a total volume of 7,449.16 liters of milk and an average donation of 4.47 liters / donor. In the 43 receiving hospitals, 2,281 neonates, mostly preterm with very low birth weight, benefited from these donations.

But what should a woman interested in being a donor do? They should contact the nearest milk bank, where they will be informed of the donation process. Basically, the candidates must be women who are nursing, willing to have their milk extracted and enjoying good health.

It is convenient to establish the breastfeeding of one´s own child well during the first month of life before starting to donate. "It is useful to include it in the daily routine. Sometimes donors draw milk from one breast while they are breastfeeding their son from the other, "says Cabrera, who has been running the regional bank's satellite center in La Paz for months.

The main thing is to prevent milk from being contaminated by a lack of hygiene or improper storage. The extracted volume changes a lot from one woman to another. The nutritional composition of the milk of each woman is also variable, which also changes as the time of lactation increases. Thus, this food is classified according to the age of the babies of the donor mothers: colostrum (up to 7 days of life), transition (from 7 to 14 days) and maturity (more than 14 days).

"Breast milk banks only make sense in a society that supports breastfeeding and that has a percentage of women who breastfeed their children satisfactorily and are willing to altruistically give their surplus to milk banks," says Nadia Garcia.

The bank she is managing has increased its activity and, in 2017, it accepted 236 women as donors, with an average donation of 7.18 liters and 612 receiving children who benefited. Each drop is important: 20 milliliters can be useful for a very premature child for several days.

When a milk bank is established in a neonatal unit, the rate of breastfeeding itself increases

More than a century of milk banks

The first milk bank was created in 1900, in Vienna. Later, milk banks were opened in Boston (1910), Buenos Aires (1921) and Rio de Janeiro (1943). Since then, there are numerous centers in Europe, the USA, Australia, Central America and South America.

With the emergence of HIV and the development of milk formulas for preterm infants, the use of milk banks decreased during the 1980s. However, they are now widespread throughout the world and contribute to a greater success of breastfeeding. According to Garcia, "the presence of a milk bank makes society consider it a very valuable asset".

When a milk bank is established in a neonatal unit, the rate of breastfeeding itself increases. According to the experts, this occurs because it creates an awareness of breastfeeding and human milk that affects the parents.

Likewise, its existence encourages research and minimizes milk contamination and deterioration. Moreover, experience in other countries has shown that the establishment of a breast milk bank increases breastfeeding rates in the region where it has been implanted.

In Spain, the history of milk banks is very short. The first center was founded in Palma de Mallorca in 2001; Later, in 2007, the first one located on the peninsula was inaugurated: the Hospital 12 de Octubre, in Madrid. Last December milk banks celebrated their tenth anniversary, which will be held next March with all the heads of regional banks and satellite centers.

An act of generosity with society

Donor mothers are making an impressive altruistic effort. "They have all the merit of the world. They are mothers who are breastfeeding their children, with what that means and, in addition, they make the decision to donate. It is an act of enormous generosity with society," says Marta Cabrera.

Donor mothers are making an impressive altruistic effort. It is an act of enormous generosity with society

Hence, knowledge must be increased and the process facilitated as much as possible. It is important that mothers have other centers - in addition to the regional bank - as this optimizes donation from a geographical point of view.

In Madrid, the centers that have been accredited to receive raw milk from donor mothers are Severo Ochoa in Leganés, Puerta del Hierro and La Paz. To attract donors, the Hospital 12 de Octubre, Severo Ochoa and La Paz.

The long-term purpose of milk banks is to try to make all children who meet criteria and do not receive donated milk do so. "The ideal would be that no newborn baby admitted took formula milk," says Nadia García.

In this sense, both experts conclude that there is still a long way to go in Spain for donated breast milk to be the standard substitute for the mother's milk when it is not available. But the future is encouraging. Maybe in a few years it will reach all the neonates that need it.

The International Society for Research in Human Milk and Lactation.

Lactation Committee of the Spanish Pediatric Association: includes recommendations, scientific documentation of interest, legislation and forums for professionals and mothers.

Asociación para la Promoción e Investigación de la Lactancia Materna (Association for the Promotion and Research of Breastfeeding) that allows to know the compatibility between the consumption of medicines and other products and breastfeeding.