A multidisciplinary study led by BCBL, a Basque research centre, opens the door to the investigation of the structure and functions of human thalamic nuclei and their involvement in Alzheimer's, dyslexia, epilepsy, Huntington’s and schizophrenia. 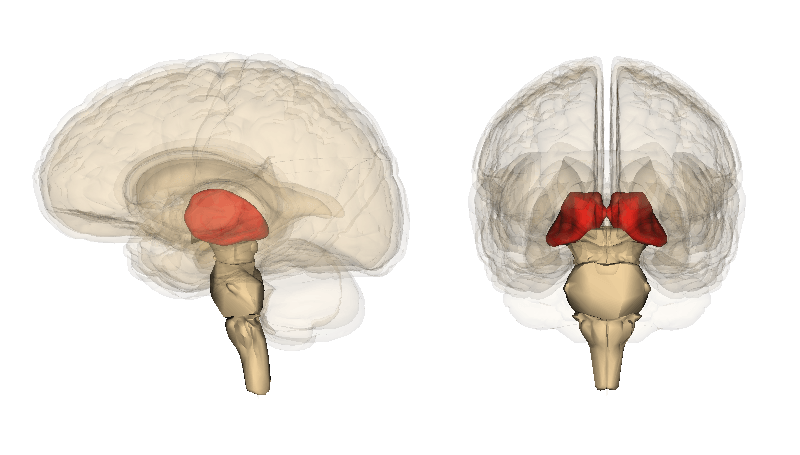 Thalamic nuclei are involved in many functions such as attention, awareness and perception. / BCBL

The thalamus is one of the most important structures in the human brain. Its nuclei distribute the information of the motor apparatus and of all the senses of the human being, with the sole exception of smell.

In addition, they are involved in many functions such as attention, awareness and perception. It´s importance is such that, if injured, the individual in question can go into a coma.

Until now, whenever the activity of the thalamus was recorded, experts could only review it as a whole, without adequately discriminating between its nuclei, which are highly specific in their function and connections with the cerebral cortex.

Not being able to observe the activity of the thalamus according to its various specific nuclei, researchers were not able to examine their possible participation in any disease or in the behaviour of healthy participants.

Now, a multidisciplinary study involving scientists from the Basque Centre on Cognition Brain and Language (BCBL), the University College London and the University of Castilla-La Mancha shows the first probabilistic atlas of the thalamus that can validly and reliably assess its different nuclei and specific functions.

This new atlas can identify the different thalamic nuclei with neuroimaging data, and in the future, it may be used for different diseases in which it is strongly involved. The results are published in Neuroimage.

This new atlas can identify the different thalamic nuclei with neuroimaging data, and in the future, it may be used for different diseases in which it is strongly involved

Its probabilistic nature makes it the first tool of this type that can be more optimally adapted to the size and characteristics of the thalamus of any person.

“With this tool, it will be possible to advance in the clinical study of disorders such as dyslexia and diseases such as schizophrenia, epilepsy, Huntington’s and Alzheimer's, among others,” as Kepa Paz-Alonso, BCBL researcher, has explained to Sinc.

In a first phase, the scientists took six human brains and subjected them to high-resolution magnetic resonance tests. Next, they laminated the 12 thalami (two per brain) in order to observe the types of neurons and to demarcate the 26 thalamic nuclei the atlas is divided into.

Once the atlas was created, the validation tests began. The researchers examined, among other things, a sample composed of 213 people with Alzheimer's and 161 who were healthy. The probabilistic atlas made it possible to discriminate between people suffering from the disease and healthy people with 88% accuracy.

“The new atlas works well. It corresponds adequately with previous thalamic nucleus classifications, is time-accurate, adapts to multiple resonance images and can appropriately classify patients into those with and without Alzheimer's,” says Juan Eugenio Iglesias, researcher at University College London.

Its role in dyslexia

Regarding dyslexia, Kepa Paz-Alonso claims that “thanks to this tool we’ll able to perform a more accurate and reliable examination of which thalamic nuclei are involved and how they functionally and structurally connect with different areas of the reading circuit, as well as with visual, auditory and Attention-deficit hyperactivity disorder (ADHD) areas involved in this disorder.”

“Many of the studies on dyslexia show a thalamic involvement; now we shall have a specific view of which nuclei are related. It will no longer be the thalamus as a whole, but specific nuclei, visual or auditory, and this is applicable to any function in which the nucleus and its connections are involved,” he concludes.