A solar flare recorded from Spain in 1886

Satellites have detected powerful solar flares in the last two months, but this phenomenon has been recorded for over a century. On 10 September 1886, at the age of just 17, a young amateur astronomer using a modest telescope observed from Madrid one of these sudden flashes in a sunspot. He wrote about what he saw, drew a picture of it, and published the data in a French scientific journal. This is what researchers from the Instituto de Astrofísica de Canarias and the Universidad de Extremadura have recently found. 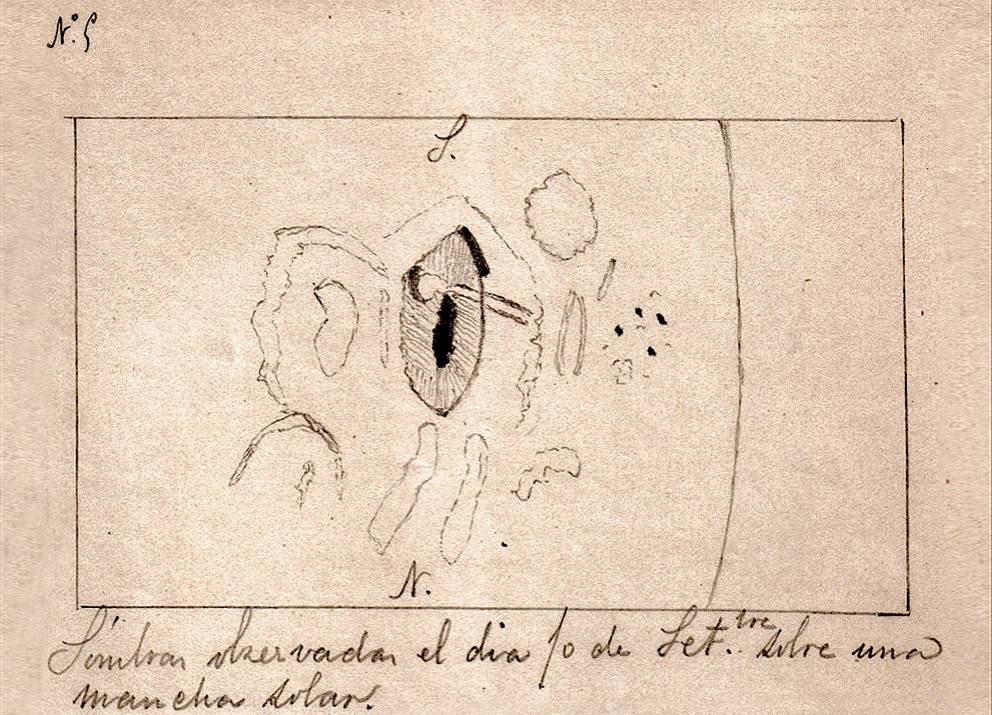 Drawing by Valderrama of the solar flare he observed on 10 September 1886 on a sunspot (with the penumbra shown with hashed lines and the umbra in black). It shows the tadpole-shaped flare. The original document is held at the Library of the Canary Islands Astrophysics Institute. / Credit: IAC

“A huge, beautiful sunspot was formed from yesterday to today. It is elongated due to its proximity to the limb ... by looking at it carefully I noticed an extraordinary phenomenon on her, on the penumbra to the west of the nucleus, and almost in contact with it, a very bright object was distinguishable producing a shadow clearly visible on the sunspot penumbra. This object had an almost circular shape, and a light beam came out from its eastern part that crossed the sunspot to the south of the nucleus, producing a shadow on the penumbra that was lost in the large mass of faculae surrounding the eastern extreme of the sunspot”.

In these words, Juan Valderrama y Aguilar, a 17-year-old amateur astronomer, described what he saw from Madrid on 10 September 1886 with his small telescope, with an aperture of just 6.6 cm and equipped with a neutral density filter to dim the solar light. The young man wrote down the details of his observations, made a drawing of the bright flash he had seen coming from the sunspot, and sent all the information to the French journal L’Astronomie, which did not hesitate to publish it.

“The case of Valderrama is very unique, as he was the only person in the world more than a century ago to observe a relatively rare phenomenon: a white-light solar flare. And until now no one had realised”, explains José Manuel Vaquero, a lecturer at the University of Extremadura and co-author of an article about the event, now being published in the journal Solar Physics, to Sinc.

A flare is a sudden increase in the brightness of a region of the sun’s atmosphere. It occurs in the outermost layers (chromosphere and corona) when the configuration of the magnetic field changes and releases energy, which can be detected in several bands of the electromagnetic spectrum as visible or ultraviolet light, although they are most commonly recorded in X-rays.

During the last two months, several of these powerful solar flares have been observed, some with associated coronal mass ejections that, in turn, can produce geomagnetic storms that perturb the communication systems in some regions of the Earth, especially radio broadcasts and GPS systems.

White light images of solar surface observed by the Hinode Solar Optical Telescope before and during the flare on Dec. 14, 2006. / Credit: NASA/JAXA

“White-light flares correspond to the most extreme cases of this phenomenon, where so much energy is dumped into the chromosphere and corona that the energy propagates downward to the photosphere, heating it up, and producing the excess brightness that we observe in white light”, according to another of the authors, Jorge Sánchez Almeida, of the Instituto de Astrofísica de Canarias (IAC).

Scientists studying solar flares employ special satellites and instruments that do not operate with visible light, but a white-light flare can be observed with ‘normal’ telescopes that use visible light, as Valderrama y Aguilar did in 1886. “It is extraordinary that in the Spain of the 19th century, a 17-year old kid would make such a scientific discovery, and it is even more impresive that he had the courage of submitting it for publication to a foreing scientific journal”, points out Sánchez Almeida.

“Furthermore, the white-light flare observed by Valderrama is, chronologically, the third one recorded in the history of solar physics”, adds Vaquero. The first solar flare was recorded by British astronomer Richard C. Carrington on 1 September 1859, and the second was described on 13 November 1872 by the Italian Pietro Angelo Secchi. The two flares were widely known in their day, as they sparked a debate on whether or not they could have an impact on the Earth.

Much less is known about the life of Valderrama than about the other two pioneers in solar studies. However, Sánchez Almeida, along with fellow IAC researcher and study co-author Manuel Vázquez, will soon publish the biography of this man, who was born in Santa Cruz de Tenerife, spent his adolescence in Madrid and returned to his birth city, where he was the director of the meteorological observatory of the city until his death.