Storms and microbes are behind the mystery of the wandering stones

The ‘sailing’ stones of Death Valley in California are famous for apparently moving by themselves, with the phenomenon not being exclusive to this North American desert but also occurring in Spain, in Altillo Chica salt pond from La Mancha. Researchers from the Complutense University in Madrid have observed that wind from winter storms generates currents that can push the stones over a surface colonized by microbes. Then once the water has evaporated, the mysterious trail is left on the dry bottom of the pond. 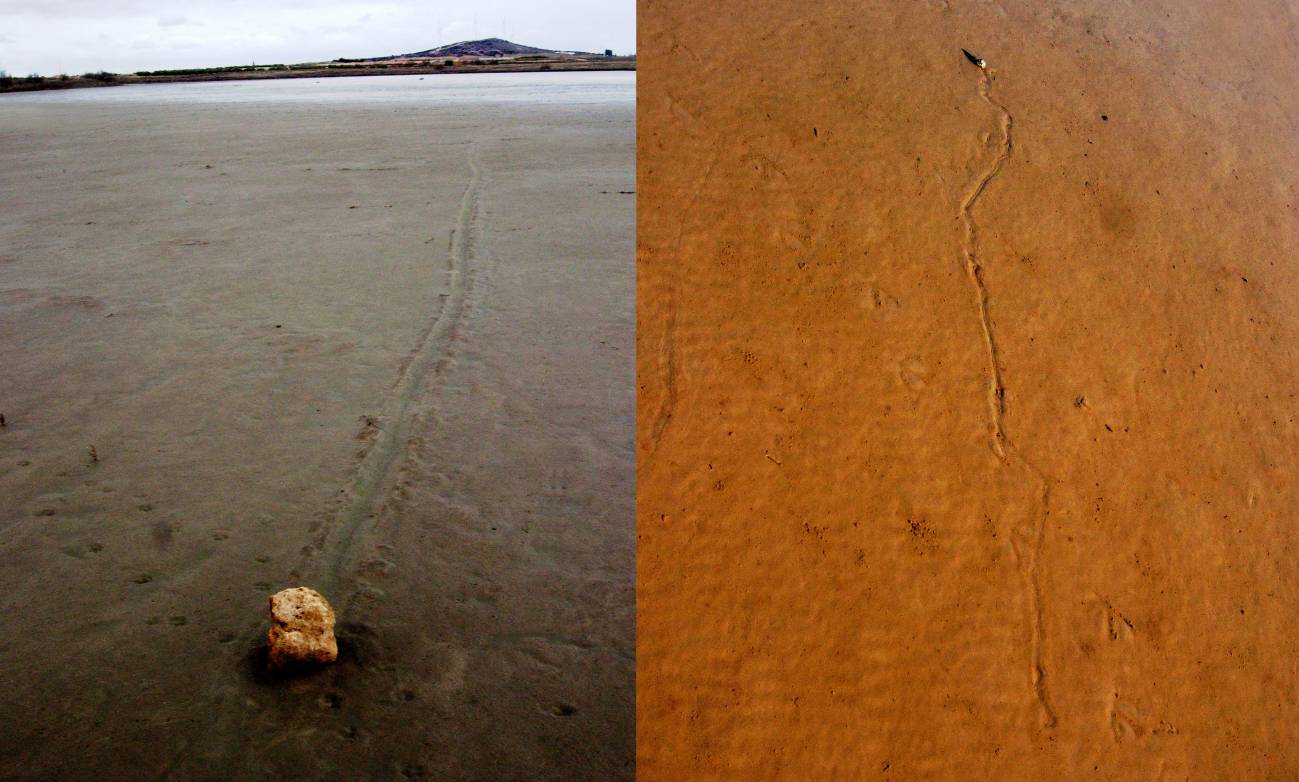 The wandering or ‘sailing’ stones move during windstorms on a surface colonized by microbes, according to the hypothesis of researchers. / Sanz-Montero et al./UCM

For decades geologists have been intrigued by the wandering stones (also called sliding or ‘sailing’ stones) in Racetrack Playa, a normally dried-up lake in Death Valley in California (USA). With no human or animal intervention, these rocks seem to move by themselves, leaving behind them a trail of their route. Some specialists believe that ice sheets surround them during the winter and this aids their movement by the wind, but Spanish scientists have come up with a different hypothesis.

A team of geologists from the Complutense University in Madrid (UCM) have discovered that moving stones weighing up to 7 kg also appear on the dry bottom of the Altillo Chica pond in Lillo (Toledo, Spain), as published in the journal ‘Earth Surface Processes and Landforms’. The trails they leave are similar to those at Racetrack Playa and can exceed 100 metres in length.

“Our hypothesis is that they move during the winter, when storms are produced and accompanied by strong winds,” as one of the authors María Esther Sanz explains to SINC. “The wind is capable of creating water currents of up to two metres per second, which would be the real cause of the sliding stones.”

Altillo Chica has a 5 cm layer of water during the rainy months. The larger stones stick out and create an obstacle for the wind-induced currents. Under these circumstances, the turbulence stirs up the soil around the rocks and creates an initial groove which is the start of a trail that can even move slightly up.

However, the movement of rocks also has an unexpected ally: microorganisms. A microbial community of cyanobacteria, single-celled algae and other tiny organisms live on the bottom of the pond and secrete slippery substances. The muddy sediment that they produce, with plenty of gas bubbles, acts like a skating rink for the stones once they have become dislodged.

Sanz points out the main arguments backing up her theory: “In addition, you can recognise the sedimentary marks or structures which accompany the stone trails, and you can observe that they follow the direction of the water currents. On the other hand, the direction of the trails clearly coincides with the prevailing winds in the area during each storm.”

The Spanish scientists rule out the possibility that ice sheets transport the sailing stones, at least in the case of Altillo Chica: “This and other ponds in the area are very salty and rarely freeze (salt lowers the freezing point for water),” reminds the researcher.

These geologists consider that their proposal would work perfectly well for other lakes in the world with movement of stones which have similar climatic conditions, including Death Valley. In fact, they have contacted North-American colleagues who, given the ice hypothesis, support the role of windstorms and microbial mats in the movement of the sailing stones.

At the moment the trails left by the moving stones this year in Altillo Chica (a natural reserve with El Longar and Altillo Grande ponds) can hardly be seen, because they form during winter storms and then fade away. Even so, this season has seen the formation of at least three different sets of trails. “Since we saw them for the first time in 2012, we have recorded seven episodes or sets of moving stones,” concludes Sanz, who highlights the need for this unique spot to be conserved.