The Andalusian coast has suffered a large tsunami every thousand years

The great tsunami that devastated Cádiz after the earthquake in Lisbon in 1755 is the most recent, but not the only one. New sedimentary deposits found on Barbate beach in Cádiz show that a major tsunami occurred 4,000 years ago, and adds to another seven that have occurred during the last 7,000 years. This reduces the recurrence of these events on the Andalusian coast to every one thousand years. According to the study, the deposits resemble the debris from the Japanese tsunami on March 11, 2011. 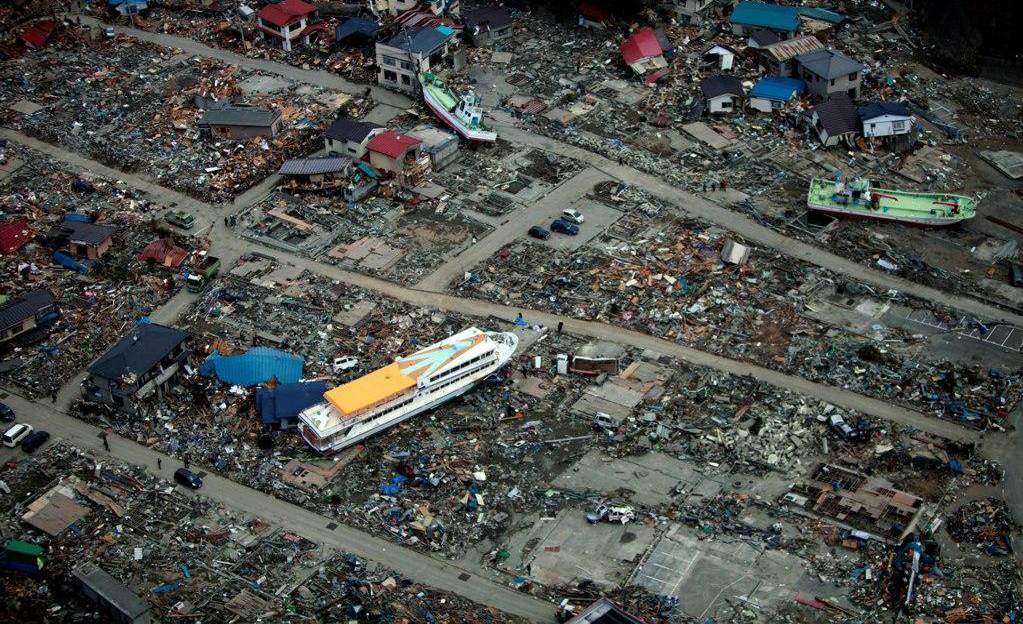 On March 11 2011 the great tsunami occurred after the earthquake of magnitude 9 in Japan caused more than 20,000 deaths and numerous material damages. / Official U.S Navy page

Some years ago, during field work being carried out in Spain, researcher at the RWTH Aachen University in Germany, Klaus Reicherter found a strange layer in a cliff on Barbate beach. It showed direct evidence of deposits up to one metre thick intertwines with fragments of marine rocks and complex structures filled with mixed components of marine and terrestrial origin.

Everything pointed to them being deposits from some tsunami, "but we weren’t quite sure", Reicherter, lead author of the study published in Sedimentary Geology, explained to SINC. However, scientists were sure that these deposits came from an extreme event.

Scientists were sure that these deposits came from an extreme event

"The first thing we thought was that tsunami debris was related to the Lisboan earthquake in 1775 for the thickness and other characteristics of the sediments, but in the analysis methods used the dates did not match up and we excluded the Lisboan tsunami," said Benjamin Koster, researcher at the German centre and lead author of the study, to SINC.

The results of the dating showed that a great tsunami took place 4,000 years ago in the Barbate region and surrounding marshlands. Data found over five kilometres between Barbate and Zahara de los Atunes coincided with those of another study in 2005, showing evidence that a tsunami occurred in Doñana National Park and in the Gulf of Cadiz 4,200 years ago.

"The event that occurred 4,000 years ago also appears to have been a strong one given the thickness of the deposits, the erosive characteristics and the grain size of the fragments of rock transported," says Koster, who adds that the triggering source could have been different to the one of 1775 given the interior architecture and erosive characteristics of the deposits.

Sedimentary characteristics of the tsunami deposits found in the cliff on Barbate beach. / Koster et al.

With this and other previous studies, the team shows that, during the last 7,000 years (a period which, up to this day, shows evidence of paleo-tsunami deposits in the Gulf of Cádiz) the south western coast of Spain has suffered a minimum of eight destructive tsunamis. "This would imply a statistical recurrence of a large tsunami approximately every one thousand years," the German researcher said.

A coast prone to tsunamis

Tsunamis cause damage to infrastructure and countless loss of human lives. In Spain, the ensuing damage caused by the Lisboan earthquake in 1775 is an example. "From the moment that geologists started to investigate the Lisboan tsunami they quickly realised that other paleo-tsunamis had occurred in the past," Koster said.

Historical reports and more modern records of the height of the waves along the Spanish coast have confirmed that extreme events took place during the last centuries, but they have not been able to record the period long before that. For this, the sedimentary information is necessary.

It is difficult for scientist to calculate the long-term recurrence intervals or the intensity of the majority of these events without sedimentary evidence. "Hence the importance of the paleo tsunami research. In the last decades we have been able to identify tsunami deposits to evaluate the extent of the events," says the researcher.

In this case, thanks to X-ray fluorescence analysis, the magnetic susceptibility, and the Georadar, among others, the researchers identified a new aspect in the tsunami deposits: several rock fragments covered in balls of sludge of more than one metre in diameter floating inside the matrix of the deposit.

Furthermore, other characteristics of debris found are comparable to deposits of recent tsunamis like the one in Japan in March 2011 and those in the Indian Ocean in December 2004. According to scientist, "many challenges have yet to be met, such as finding out the heterogeneous distribution of the deposits along the Gulf of Cádiz," they said.