Tweet much to gain popularity is an inefficient strategy

The imbalanced structure of Twitter, where some users have many followers and the large majority barely has several dozen followers, means that messages from the more influential have much more impact. Less popular users can compensate for this by increasing their activity and their tweets, but the outcome is costly and inefficient. This was confirmed by an analysis of the social network performed by researchers from the Technical University of Madrid. 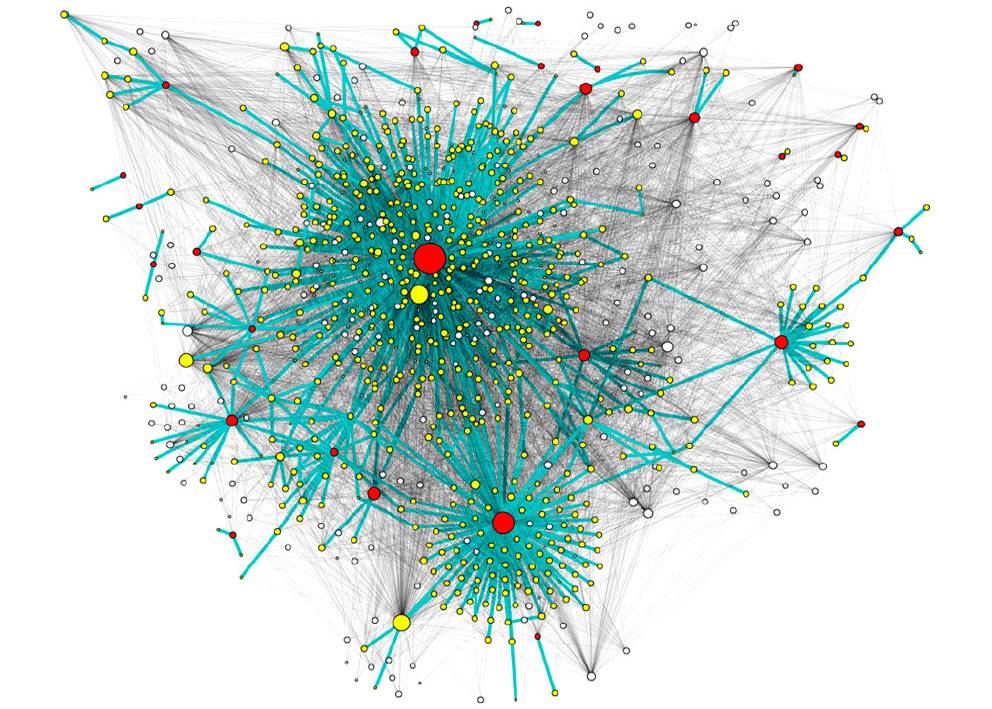 Visualisation of the spreading of messages on Twitter (retweets network in green) on the followers network (grey). The nodes represent users and their size is proportional to the number of followers that they have. Red indicates users who have written original tweets and yellow indicates users who have retweeted them. / Image adapted by A.J. Morales, R.M. Benito et al. - Social Networks

What can Twitter users do to increase their influence? To answer this question, a team of researchers at the Technical University of Madrid (UPM) has analysed thousands of conversations, applied a computational model and devised a measure that relates the effort spent to the influence gained by tweeters.

The results, published in the journal ‘Social Networks’, confirm that the actual structure of Twitter is the key to the influence. It is a heterogeneous network, or rather, one where there is a large number of users with very few followers (61 on median, according to O’Reilly), and a few –very few– with an enormous number of followers (up to 40-50 million).

With this type of distribution, network position or ‘topocracy’ comes before meritocracy: “Having a larger number of followers is much more important than the user’s ‘effort’ or activity in sending lots of messages,” Rosa M. Benito, head of the research team, tells SINC.

“However, if the underlying network were homogeneous (something which it is not), users would have approximately the same number of connections and their position on the network would not be important; their influence would depend directly on their activity,” establishes the researcher.

According to the study, on heterogeneous networks like Twitter the way in which users send messages does not matter, because there is always going to be a highly influential minority. Tweets that more popular people or institutions send are spread more and have greater impact, even though they send very few, which is also quite usual.

“The data shows that the emergence of a group of users who write fewer tweets but that are largely retweeted is due to the social network being heterogeneous,” Rosa M. Benito points out.

The researcher is not exactly encouraging for the majority of tweeters who wish to be more influential: “Ordinary users can gain the same number of retweets as popular users by increasing their activity abruptly. Then it is possible to increase their influence through activity, but it is costly and inefficient”.